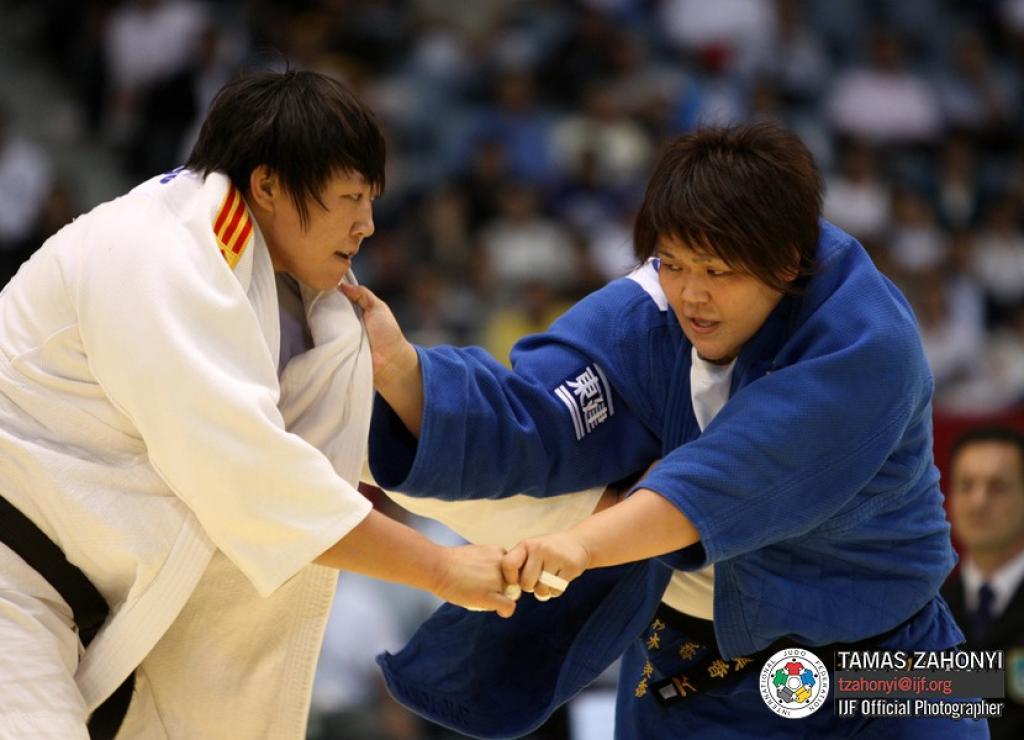 Since 2005 the trend is up for the Japanese women. In 2005 they had only one World Champion, by Midori Shintani, not even by Tani. In 2007, Tsukada and Tani won two titles, and last year in Rotterdam the Japanese team collected three gold medals. Everybody in Japan counts on at least four women’s world titles.

U48kg
The women in the U48kg category are sensationally strong. They always have, but what else can you expect if the phenomenon Ryoko Tani took the previous seven, with one exception in 2005 when she was absent. In 2005 Yanet Bermoit (CUB) won, aged 18.
Before Tani however Japan never won the U48kg world title. But now Japan has the unbeatable Tomoko Fukumi and Haruna Asami, who both lead the ranking. Emi Yamagishi who is not selected is the world’s number three. The first non Japanese to follow is Frederique Jossinet (FRA) who was in the world final twice and already won four medals. Many good judoka will not be able to stand the Japanese tandem, but Alina Dumitru (ROU) is one of the few to challenge the amazing two. The Olympic champion didn’t have to show her ultimate form so far. The competition for her is too easy. But she did lose twice to Asami this year. Can Dumitru upset the Japanese? It would be sensational.

U57kg
Kaori Matsumoto is the third obvious gold medal for the Japanese fans. We should doubt if she can stand the pressure, although this years the cards look fantastic for Matsumoto. Last year she finished 5th in this super close category. Anyone can become world champion. Some have more experience, some are more talented. Caprioriu (ROU) is extremely strong and with her power judo she may be able to upset Matsumoto, she beat her before in Hamburg and this year Caprioriu is steaming.
The other candidates for a medal are mainly European: Monteiro, Karakas and Filzmoser have showed to stand their ‘man’ but all need a very good day to beat the best. Reigning World Champion Ribout will not defend her World title due to an infection.

U63kg
The highest ranked women seemed to be the most experienced judoka U63kg. Yoshie Ueno (27y), Gevrise Emane (28y), Claudia Malzahn (27y) and Elisabeth Willeboordse (31y). Ueno and Emane both tasted the sweet of a world title and Emane is a very dangerous candidate. She switched to 63kg and can challenge Ueno. But Ueno is fortunately human. She lost to Dutch Annicka Van Emden (23y) in Paris. All five have a good chance, but they all have a nemesis that they don’t want to fight. It’s an attractive category for the neutral fan.

U70kg
Although Masae Ueno ruled the U70kg category in 2001 and 2003, this category can have various winners. At least there’s not one major favourite. Although Anett Meszaros leads the world ranking, she finished second last year to great surprise Yuri Alvear (COL). Meszaros defeated Lucie Decosse last year, but the French is looking for the gold and took revenge in Paris this year. Since 2005 the French have at least one world champion: 2005 Decosse, 2007 Emane, 2009 Ribout.
Yoriko Kunihara is strong in Asia, but will need to have all support of the Japanese crowd to measure with fighting machines like former world champion Edith Bosch and Rasa Sraka.

U78kg
Another chance for France to win a gold medal is the U78kg category. With Céline Lebrun leading the IJF World Ranking the French are hoping for gold, but statistically they are not so sure. The oldest female World Champion was Driulis Gonzalez (CUB), almost 34 years. Lebrun should improve this record. One hope for France is that the second oldest was French, Christine Cicot (33y) in 1973. Audrey Tcheumeo is the other sensation from France. Very focused, very uncomplicated, strong but maybe still unsteady.
Japans Akari Ogata (19y) can be one of the youngest ever, but Lebrun defeated her in Suwon this year. Ogata is ranked 4th in the IJF ranking. Heide Wollert (GER) ranked 2, can challenge the best but can also lose. She lost seven times this year. One of the losses was against Olympic Champion Xiuli Yang who disappointed in Suwon (5th) but did win the Grand Slam of Moscow where she defeated Tomomi Okamura, another challenger from Japan. American Kayla Harrison wins everything in Pan America, but is it enough for this level?

O78kg
The leader of the World Ranking is from Slovenia, Lucija Polavder won the European title this year. She is strong, athletic but can she stand the Japanese. She already lost to Megumi Tachimoto this year, and Maki Tsukada, the world’s number three is aiming for gold. She won the Grand Slam in Moscow and won the World and Olympic title before. What a chance to do it at home soil. Qin Qian (CHN), Idalis Ortiz (CUB) are the outsiders for a medal.