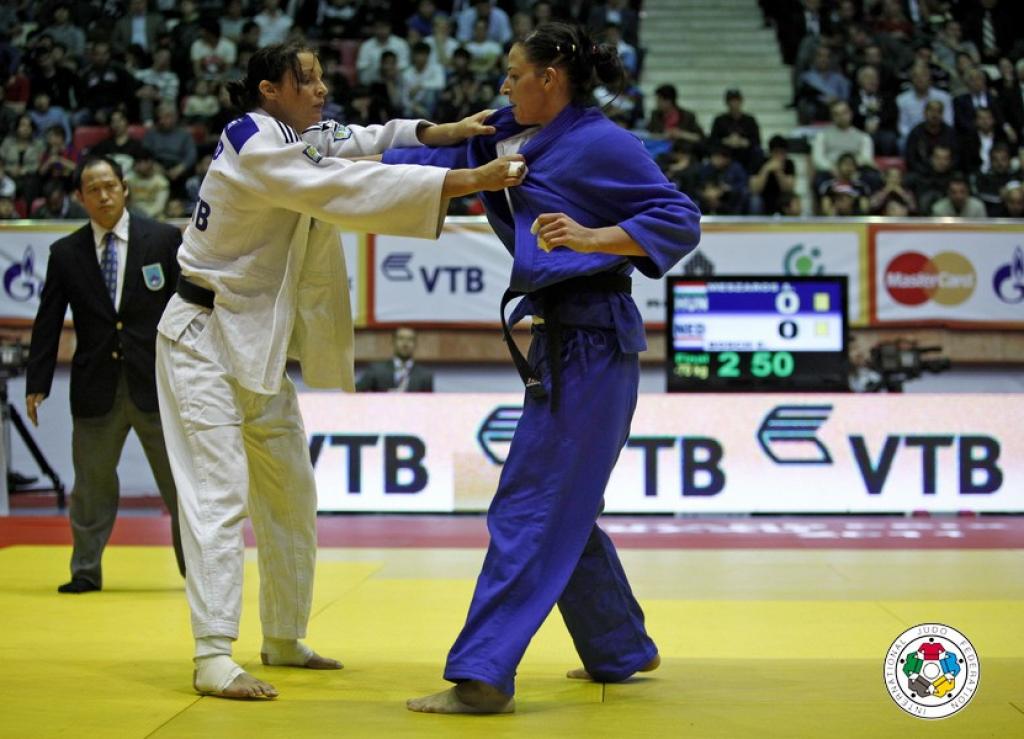 At the second day of the Grand Prix in Baku, Uzbekistan did good business. With an all Uzbekistan final U73kg the Asians took the lead in the medal tally as twenty countries won medals over the first two days.
All gold medals have been distributed over nine different nations. Today the final U73kg between Navruz Jurakobilov and Mirali Sharipov was decided by yuko by a penalty.
Sharipov the more experienced fighter was able to defeat vice world champion Dex Elmont (NED) in the semi final while he had already defeated Kunter Rothberg, Ramil Gasimov and Costel Danculea, a quality good trio. Elmont was not comp;letely satisfied about his performance, but cherished the points. Jurakobilov even more, he earned 200 points.
Jurakobilov also defeated some judoka who are in form looking back at the last European Championships. In the semi final he defeated Jaromir Jezek CZE) who won bronze in Istanbul and Peter Scharinger (AUT) who finished fifth in the Turkish capital two weeks ago.
Sharipov is Uzbekistan national champion of 2010 and defeated Jurakobilov in the final but the 3 year older Jurakobilov was able to overcome Sharipov.
Elmont and Jezek finished with bronze.

Exactly one year ago Ole Bischof (GER) won his last major event in Tunis, and in Saturday’s last fight he added the Grand Prix of Baku. In last year’s final he defeated Leandro Guilheiro who was now defeated by Bischof competitor in the final Elkhan Rajabli of Azerbaijan. Rajabli, 31 years old against Bischof, also 31 but 6 months older and one Olympic title difference, had met three times earlier and today Bischof added his fourth consecutive win, and his first in Baku. Bischof won the match by waza-ari.
Rajabli defeated an impressive list of opponents today with German Sven Maresch, Aliaksandr Stsiashenka (BLR) and Guilheiro (BRA) as most impressive wins. Bischof had an easier run to the final but saved the best for last.

In the women’s U63kg final Alice Schlesinger of Israel won the title. She has good memories to Baku as her last win was in Baku in October at the World Cup. Then she defeated Yarden Gerbi of her own country, today the competition was much stronger and it was Schlesinger who took revenge of her missing medal in Istanbul. Both Israelian ladies finished fifth but Schlesinger took revenge today by defeating two seriously strong opponents in Anick van Emden (NED) and Urska Zolnir (SLO), the most likely finalists. In the final Schlesinger beat Zolnir by two wazari. Schelsinger led after 36 seconds, Zolnir came back but Schlesinger scored in the last minute of the match.
Zolnir already defeated Yarden Gerbi today and beat Dutch Esther Stam in the semi final who took the bronze with her Dutch colleague Van Emden. It was Israel’s first victory this year.

For Holland it was the fourth big win. Previously named Esther Stam won in Sofia, Henk Grol in Paris and Edith Bosch added another title after winning the European title in Istanbul. In Baku she defeated nemesis Anett Meszaros (HUN) in the final. 23-year old Meszaros who seemed to be getting stronger each year and finished second at the last World Championships has a more difficult period this year after getting back from an injury. Two weeks ago the two fighting cats fought the semi final at the Europeans decided by Bosch in an early stage by a penalty and Meszaros could not get back. Today in Baku the difference was again made by penalties. Both ladies received three penalties resulting in waza-ari but Bosch finished off the match by ippon by a huge o-uchi-gari, scoring ippon in extra time.
Bosch earlier defeated Cecilia Blanco (ESP) for the 12th time in 16 matches. There a lot to do for the youngsters to defeat the experienced fighters like Bosch (380 points in two weeks time) and French Lucie Decosse who both seemed to be warming up for London 2012.
Baku 2011 is the first event of the year counting 100% for the Olympic Qualification in London 2012. From now on, every single point will be important for all athletes.