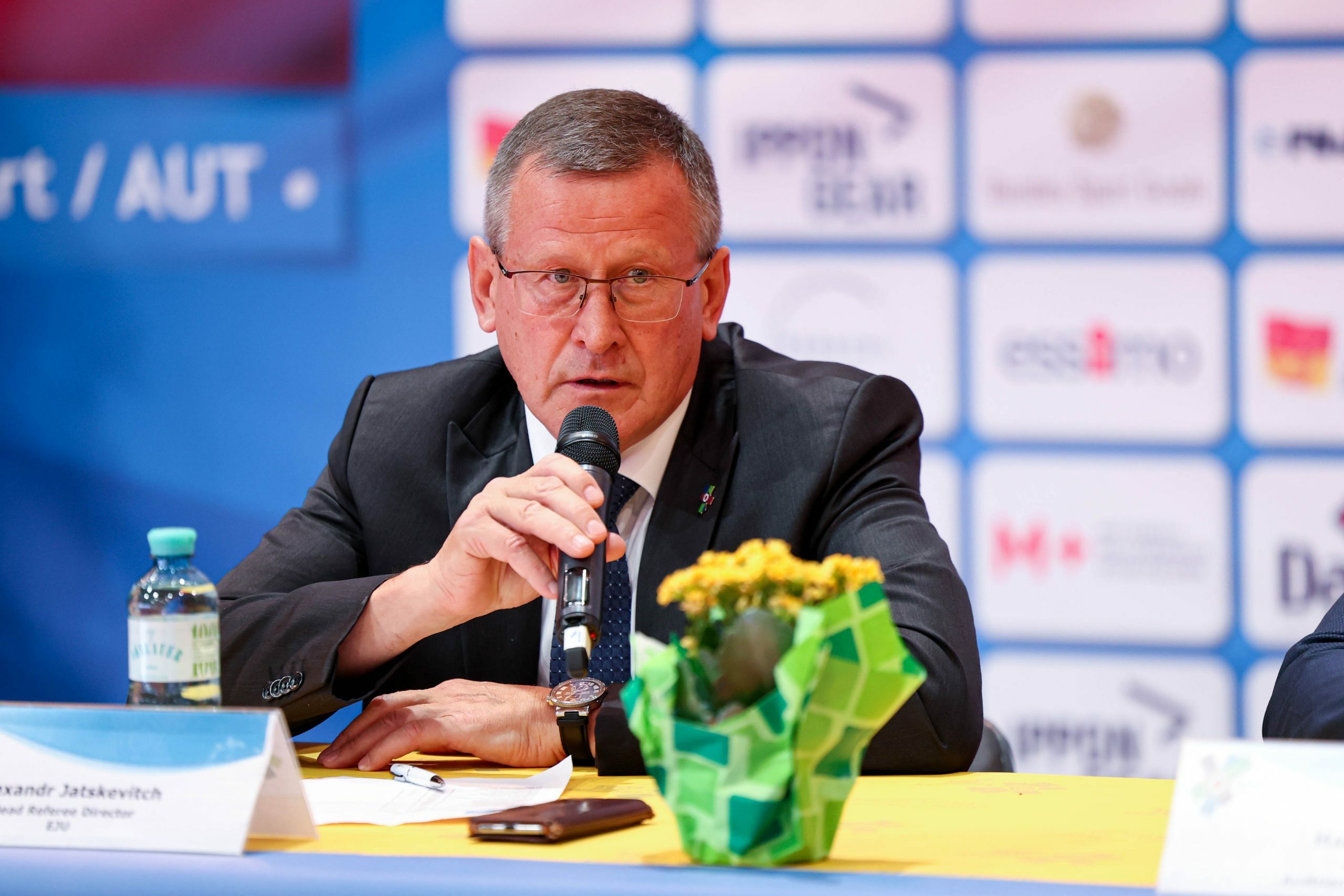 European Judo Union Head Referee Director Alexander JATSKEVITCH (LAT) used to be a world class judoka (winning an Olympic bronze medal and 3 European Championships) and a top coach (e.g. in Belgium). The 64-year-old Latvian likes to speak clear words when it comes to refereeing. The EJU Media Team took the chance to invite him for a quick update after the end of competition at the EUROPEAN OPEN in OBERWART (AUT).

The line-up of referees in Oberwart was truly impressing – with 8 out of 12 nominated for the World Senior Championships in TASHKENT (UZB) including 7 Europeans. Who had the idea of getting them together a month before the World Championships?

Alexander Jatskevitch: “The Austrian hosts did a great job, they invited the entire elite group. This means the referees only had to cover their travel costs, nothing else.”

And they need two continental tournaments per year anyway. So it was a win win situation, wasn’it?

Jatskevitch: “The more tournaments on high level you can work at, the better. The sportive level in Oberwart was top, with lots of Olympic medal winners. So it happened to be the perfect stage for our top-team. In total we used 29 referees. The younger ones learning on spot from the experienced ones. That is exactly how we like it.”

After two long competition days in Oberwart: How would you sum-up the efforts of the 7 European World Championship referees?

Jatskevitch: “I am more than happy with the seven of them (Ioana BABIUC/ROU, Roberta CHYURLIA/ITA; Matthieu BATAILLE/FRA, Raul CAMACHO/ESP, Velimatti KARINKANTA/FIN, Vladimer NUTSUBIDZE/GEO, Balasz GOSZTONYI/HUN) plus Jhon RAMAEKERS/NED, he belongs to our top-team as well. They all judged on a very high level. It was a real quiet weekend, without any serious complaints or problems…”

… so you would say: They are ready for the World Championships?

Jatskevitch: “They are in top-shape, no doubt. Honestly speaking: After the European Championships in Sofia in April we had a couple of issues and discussions. There definately too many faults occured. But this time – no discussions, no major faults. It’s a clear YES, they are more than ready for Tashkent.”

Jatskevitch: “There is a clear change to the better: If you compare heavyweight fights six to eight years ago with the actual ones of 2022, there is a huge difference. These days we have more throws, better action and less shidos. You can believe me: Referees would like to give less shidos – but most of the time they have no other choice. And I am also convinced, that Judo has become safer too – with the new rules.”

When a tournament is over: How many fight videos you normally watch the next days in order to get a clearer picture of the referee performances?

Jatskevitch: “It can be 30 minutes only, other times it’s a whole night of studies. The better the performances, the less to talk about.”