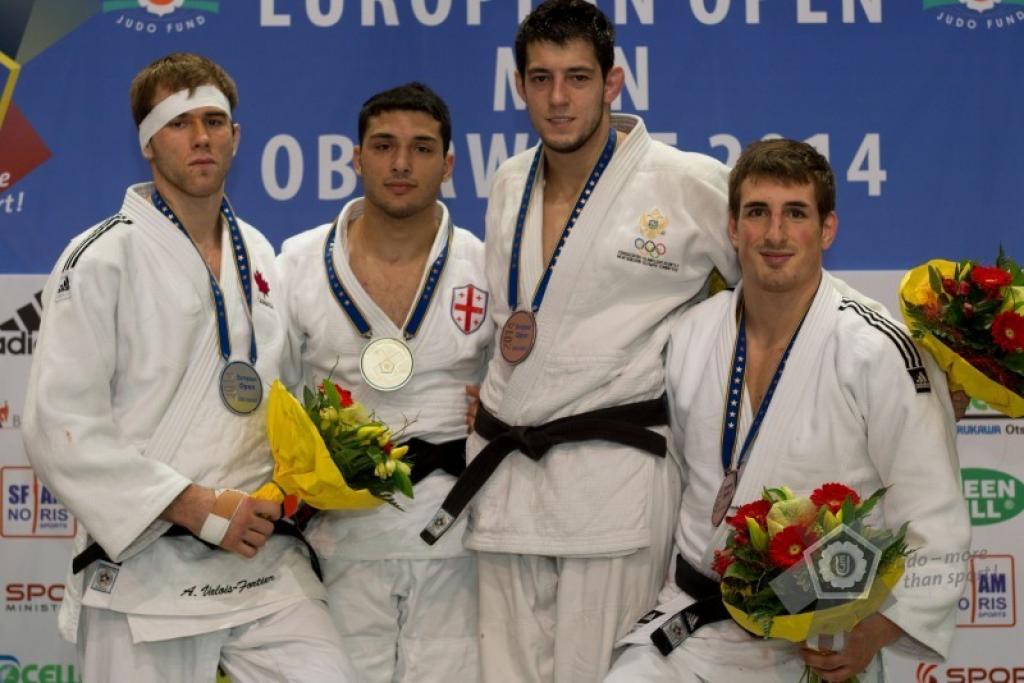 Barna Bor first sent home his German and Romanian opponent, then it was time to face Andrey Volkov from Russia. Bor won his semi-final by a shido, and soon was up on the mat facing the Japanese Takeshi Ojitani for the gold medal. Bor didn’t hesitate and thrown Ojitani for ippon and claimed the gold medal for Hungary. The Russians did not go home with empty hands, Soslan Bostanov claimed the first bronze medal and Lithuanian judoka Marius Paskevicius took the other bronze medal. Altough Europe has started off slow this weekend after collecting two medals on the first day, on Sunday it was a better view at the medal tally. European Judoka were dominating on the tatami and three out of four gold medals were captured by European players. We were able to witness some incredible judo today at Oberwart by following the rest of the weight categories left for the weekend: U81, U90, U100 and O100. Starting off with the U81 category: World number 13 in the U73 category Zebeda Rekhviashvili decided to fight a category above which made no different for the Georgian judoka. He dominated all his opponents by ippon in both tachi-waza and ne-waza actions. Rekhviashvili, who recently married, was also celebrating his birthday today and what could have been a better present than a gold medal and the national anthem from the top of the podium. Zebeda showed an incredible set of judo skills on the tatami especially with his several times perfectly executed osoto-gari. In the final contest he defeated the Canadian Olympic bronze medalist Antoine Valois-Fortier. In the same weight category Marcel Ott secured a bronze medal for the host nation while Montenegro also collected a medal by their only entered player, Srdjan Mrvaljevic. In the category U90kg, Europe showed ‘no mercy’ to their opponents and managed to fill up all the spots on the podium. In the bronze medal contests first it was Peter Paltchik from Israel who pushed Japanese medal hopeful, Takeshi Sugahara of the podium. This was followed by a battle in-between Italian Walter Facente and Holland judoka, Michael Korral. Italy took the bronze medal. In the final, it was up on Zviad Gogotchuri to double the number of gold for Georgia. Gogotchuri did not hesitate and threw his Russian opponent, Murat Gasiev for ippon. Second gold for Georgia was secured. In the U100kg category, European judoka showed a great potential until the quarter-finals, where Hungarian titan, Miklos Cirjenics kept Europe’s hope after coming through repechage straight into the bronze medal fight. In the medal contest, his Japanese opponent Ryosuke Takahashi overcame the Hungarian judoka. Cirjenics finished on the 5th place as the best of Europe in his weight category. United Arab Emirates and Japan claimed the bronze medals while the final was between Mamedov (KGZ) and Correa (BRA) and the former Brazilian World Champion won the gold medal, a good motivation for the World Championships. Overall 272 players were fighting over the weekend, and 208 were European. Japan finished on the top of the medal table, followed by Georgia, Brazil, Hungary and Mongolia. Europe collected three gold, one silver and eight bronze medals over the weekend. The European tour of competitions continues, next weekend Dusseldorf is the host of the Grand Prix. Watch the photos of the European Open in our photo gallery.