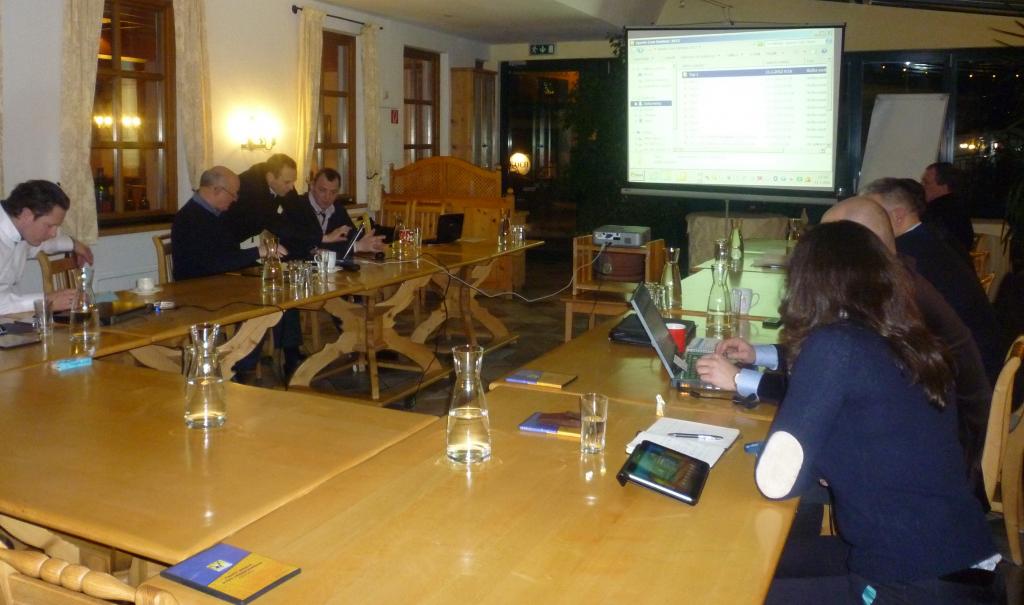 Last week in Mittersill a meeting was organized with all observers of the EJU Sports Commission, led by vice president Michal Vachun (CZE).
It was the first time in many years that the whole Sports Commission met. Besides Michal Vachun also the other sports directors were present to explain their ideas and experiences: Design White and Pavel Yasenovski.

On the agenda a few important topics and observations:
> A summary of the 2011 EJU events: Under control of Sports Com and in collaboration with other EJU sectors, in total 15.415 entries were registered and processed during the European Cups for all age categories, as well as World Cups and our European Championships.
All together 51 EJU competitions, 15 OTCs and Training camps were organised by the national federations. Additionally the EJU contributes to nine IJF events in Europe, so in total 75 events to cover.
> 29 European Federations were involved in organising these 75 events.
> The commission looked into the growth of the events compared to 2010 in both athlete numbers as the number of nations participating.
> The structure of the European Cups for Cadets and Juniors serves the purpose of efficient development of athletes in these age groups. As an example 86% of all medal winners at the European U17 Championships in Cottonera (MLT) were athletes seeded according to Cadet Ranking list.
The European Cups for seniors serve mainly for the development of athletes in the transition between juniors and seniors. The Ranking is used for seeding at the European U23 Championships.
> The EJU World Cups are on top of worldwide statistics of participating of athletes and nations: In the women’s category Prague, Oberwart had many participants and in the men Budapest and Warsaw.
> Worldwide closer to the EJU events were the World Cups in Miami and Sao Paulo at the 5th and 6th position.
> The EJU Olympic Training Centers and Training Camps were also evaluated, as an efficient part of preparation for elite athletes. The project will be continued even after the London Olympics.

Michal Vachun: “In general the development is very positive, unfortunately some events do not reach the average competitive levels and must find a way to improve.”

“The difference in European Cups for Cadets is too big. At some European Cups more than 600 athletes from 28 nations took part, but at the smaller events approx. 100 athletes took part from 6 nations. Similar differences are applicable at junior European Cups and World Cup organisers. After the Olympic Games all events will be evaluated and upgrades / downgrades are likely to follow” said vice president Vachun.

During the seminar Commissioners were instructed on implementation of updated sports rules and procedures approved by EJU Directing committee the day before. Furthermore a preview of the long term IJF and EJU competition structure in 2013 – 2016.
Their main mission is close collaboration with organisers before, during and after each EJU event. They are part of the success as well as of eventual failures. In any case, greatest appreciation belongs to all organisers of events for their efforts, motivation and contribution to the development of the EJU.