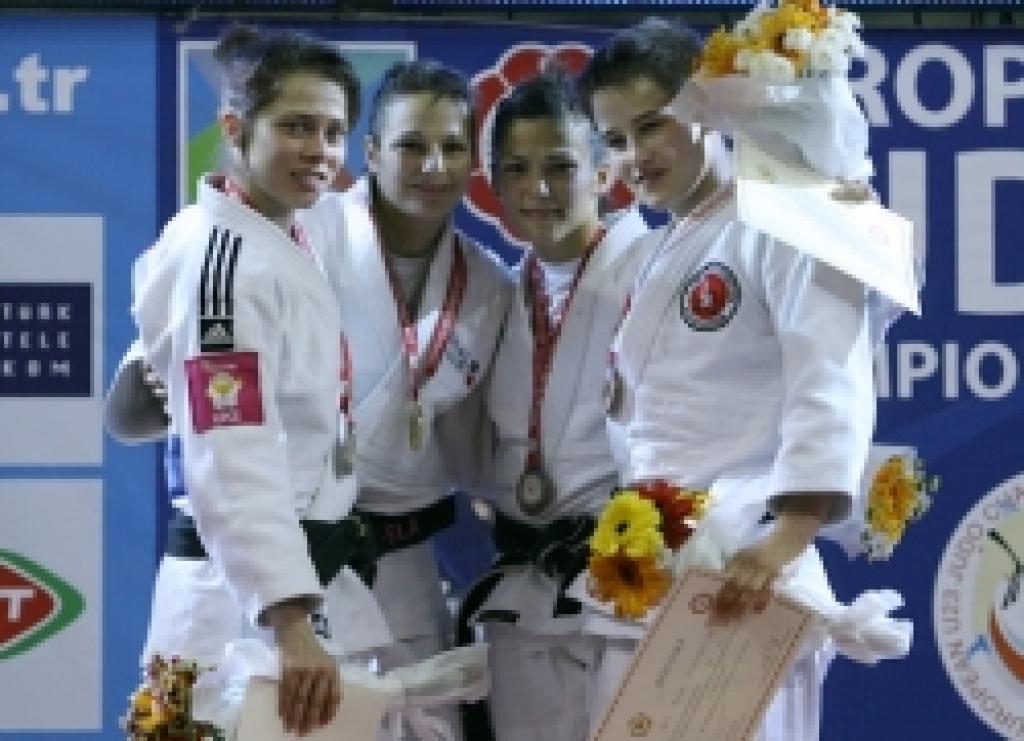 At the first day of the European U23 Championships in Antalya (TUR) Natalia Kuzyutina won the U52kg category. The Russian European Senior Champion was of course the favourite in advance. She was the only 2009 European Champion to compete here in Antalya, and she did what she had to do, complete her excellent record of European titles. Since 2004 she has won the U17, U20, U23, senior and European team title. The last three this year.
In the final Kuzyutina beat Tugba Zehir (TUR), just 17 year young who was today’s youngest medallist.

Another favourite Hedvig Karakas, third at the senior World Championships failed to win this category and didn’t even finish at the podium. She lost her fights to the third ranked Irina Zabludina (RUS) and the final winner U57kg Hannah Brück from Germany.
Brück defeated Andreea Chitu in the final.
Belgian Julie Baeyens won the second bronze medal.

U48 kilogram Elena Moretti (ITA) took her last chance to win the U23 title. 22-year old Moretti won her final of 21-year Birgit Ente (NED). Moretti also beat Ente this year at the World Cup in Madrid, so her win was not a great surprisea, tlhou she wasn’t the biggest favourite. Moretti finished just third at Italy’s U23 championships, but she did win the Mediterranean Games in Pescara this year.
Turkey took a second medal on home soil, this time a bronze medal for Kubra Tekneci, showing that Turkey is growing in judo, taking into account that they won three bronze medals at the U20 World Championships recently in Paris.
Amelie Rosseneu won the second bronze medal for Belgium. Also Belgium experienced a positive development in international judo.

In the men’s category Paata Merebashvili won his second European title this year. He also won the U20 title in Yerevan in September. On Friday he beat Robert Mshvidobadze (RUS) in the final.

Rok Draksic (SLO) finally won a European title. He lost two U20 finals in 2004 and 2005 and already won a bronze medal at the U23 Championships in 2004, but never succeeded to win a European title. Today he managed to do so.
In the final he beat Pawel Zagrodnik (POL), in 2007 he won bronze.