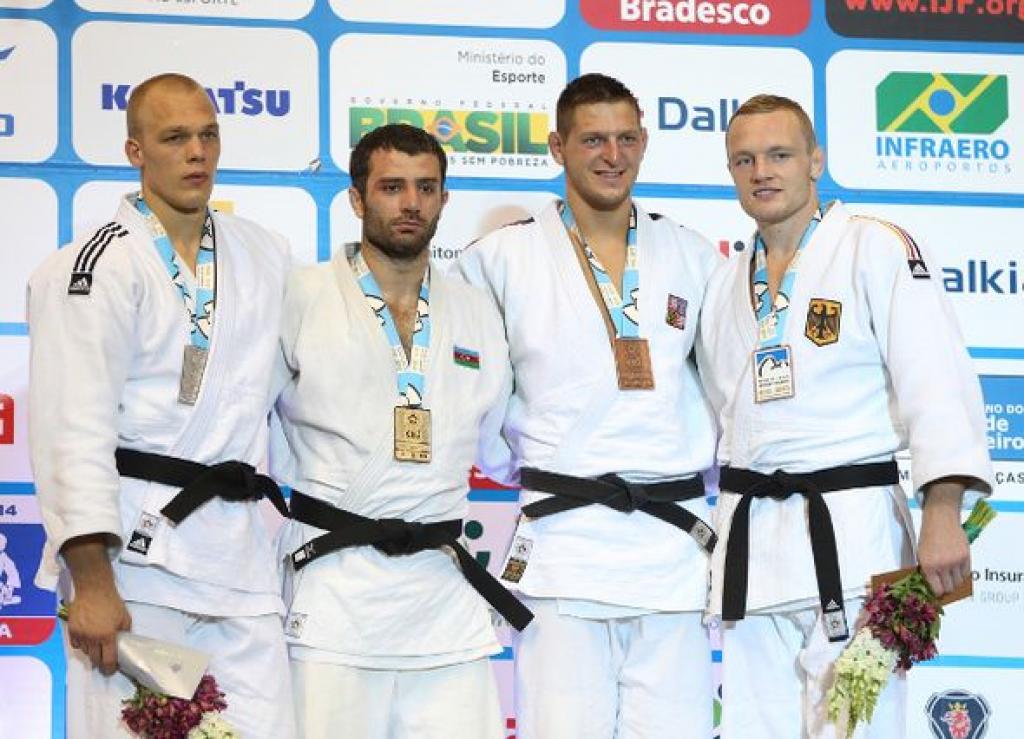 World number one and World Judo Masters winner Elkhan MAMMADOV (AZE) arrived in Rio with the favourite tag and duly delivered as he dismissed the -100kg elite including a win in the final against Olympic bronze medallist Henk GROL (NED). Former world bronze medallist MAMMADOV, 31, was more active from the outset against the popular Dutchman who would fail to shake off his unwanted reputation as the nearly man of judo as he was presented with his third world silver medal with two Olympic bronze medals already to his name. The contest was decided when MAMMADOV surged forward and threw GROL for a waza-ari and, despite being penalised for a shido for passivity, the Azerbaijan judoka savoured winning his country’s first senior world title. In the semi-final GROL had seen off the challenge of European champion Lukas KRPALEK (CZE) with a come-from-behind victory as he countered the Czech with a ko-soto-gake for ippon with just 43 seconds remaining. At the same stage MAMMADOV thwarted the efforts of FISU Universiade bronze medallist Soyib KURBANOV (UZB) as he countered a drop seoi-nage attempt by bundling over the Uzbek for a waza-ari. The emerging KURBANOV had stopped the fine run of Frenchman Cyrille MARET (FRA) as a ko-soto-gake earned wazaari-awasette-ippon after the Uzbek opened the scoring with a harai-makikomi. MARET, to his credit, had already taken the scalp of 2007 world champion CORREA by ippon in his first contest. The first bronze medal was won by Olympic bronze medallist Dimitri PETERS (GER) as KURBANOV ran out of steam after a gruelling and creditable World Championships debut. KURBANOV went ahead with a yuko from a seoi-nage but with two seconds left PETER pounced and threw his opponent for a waza-ari with a morote-eri-seoi-nage. The second bronze medal was won by the ever-impressive European champion Lukas KRPALEK (CZE) who defeated 33-year-old ONO Takashi (JPN). KRPALEK won the second senior world bronze medal of his career against two-time world bronze medallist ONO, who moved up from -90kg to -100kg this year, as a yuko from a ko-soto-gake proved the difference. +100kg: Unstoppable RINER wins senior world title number six France’s unstoppable heavyweight phenom Teddy RINER (FRA) won his sixth senior world title as he swept past Olympic bronze medallist and world number one Rafael SILVA (BRA). There is an air of inevitability when the Frenchman competes – it’s become a case of when and how he will win rather than if he will win. In the final RINER ominously went ahead with a waza-ari from a osoto-gari and moved straight into osaekomi-waza as he held down the Brazilian with a kesa-gatame to frustrate the home crowd and prove once more that he is a talent for the ages. In the semi-final RINER strolled past World Judo Masters winner Adam OKRUASHVILI (GEO) as an uchi-mata was awarded a waza-ari before he used yoko-shiho-gatame and then tate-shiho-gatame for the win. At the same stage SILVA conquered the retiring Olympic bronze medallist Andreas TOELZER (GER) on shido penalties as the German infringed on two occasions while the home judoka was only penalised once. RINER told the media: “I’m really happy because for me Rio has a special taste as my senior career really started here when I won my first world title at the age of 18 in 2007. Now I’m 24 and today I’ve won my sixth world title. “This is only the beginning of the story, I’m still really motivated. It’s been a difficult year because I’ve been injured for most part but thanks to the medical staff I could get ready and come back in time. I had a really good feeling today about my judo and I wanted to apply an o-soto-gari which I was successful with. I must remain focused for the team because I want to fight for my teammates and to give them the possibility of bringing back home a medal.” The first bronze medal was won by Moscow Grand Slam bronze medallist Faicel JABALLAH (TUN) who won Africa’s first medal of the World Championships against OKRUASHVILI after two minutes of action. After catching the Georgian for ippon with a ko-soto-gake, the highly-impressive Tunisian was open-mouthed with disbelief having finished in seventh-place at the 2011 World Championships in Paris. The second bronze medal was won by TOELZER against former three-time world champion Alexander MIKHAYLIN (RUS) in a battle of two judo stalwarts. With no attacks troubling the scoreboard the contest was decided by shido penalties and MIKHAYLIN lost out with three to his name (as he was penalised for passivity, a false attack and not taking a grip), one more than his long-time German rival. +78kg: Cuban ORTIZ adds world title to Olympic gold Olympic champion showed her superiority on the highest stage once again as she overcome Brazil’s world number one Maria Suelen ALTHEMAN (BRA) in the +78kg final.ORTIZ scored a waza-ari from a ko-soto-gari and immediately applied a kami-shiho-gatame to seal the win. The newly-crowned world champion booked her place in the final by defeating two-time world bronze medallist TACHIMOTO Megumi (JPN) by a shido penalty while runner-up ALTHEMAN saw off European silver medallist Emilie ANDEOL (FRA) at the same stage via a shido for passivity. The first bronze medal was won by TACHIMOTO in 18 seconds as she threw European u23 Championships winner Larisa CERIC (BIH) for ippon with a harai-goshi. The second bronze medal was won by Asian Championship winner LEE Jung Eun (KOR) as she ended the medal ambitions of ANDEOL. LEE opened the scoring with a yuko from a drop seoi-nage and turned to shime-waza to seal the win with a koshi-jime forcing the French judoka to succumb. After six days of pulsating action, Japan lead the medal table with seven medals including three gold ahead of France who have won the same amount of medals with two gold and Cuba who have won two gold medals. Review all the photos here: