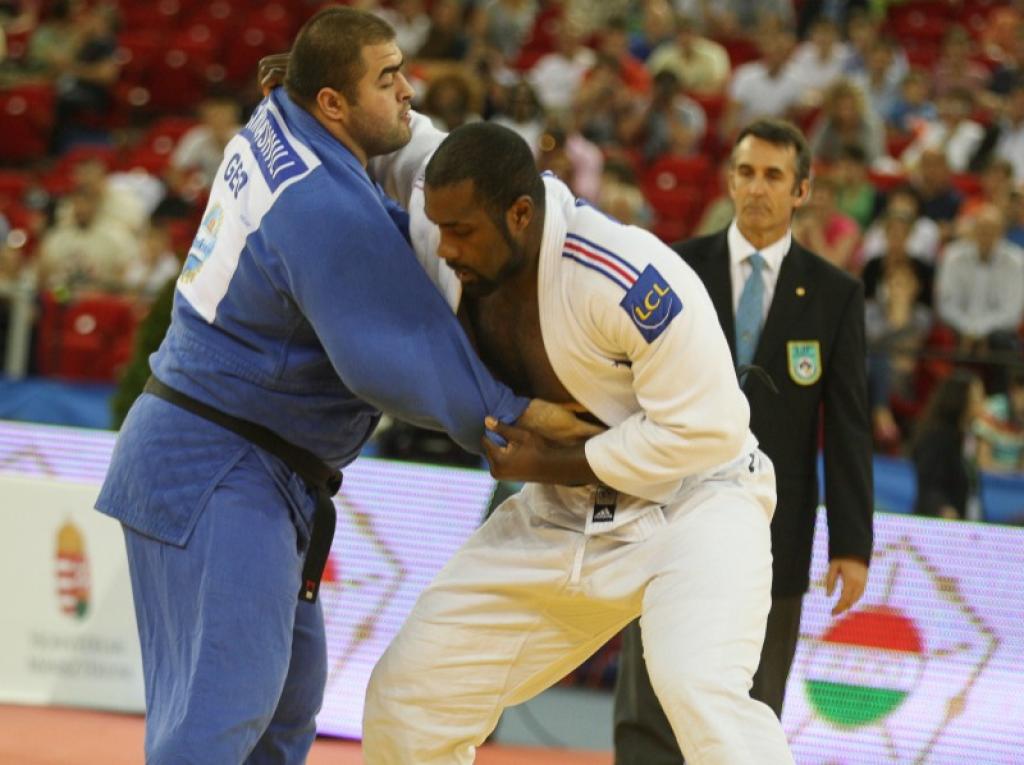 The two strongest European fighters of this year were the opponents in the final. Adam Okruashvili had to fight super star Teddy Riner. Okroashvili faced the reality many judoka are facing when fighting Teddy Riner. They can’t get too close and receive penalties. This was the view of the first three minutes when the Georgian got penalized three times. But Okruashvili didn’t gave up and tried to throw Riner who is so good that the public supports the surprise at any time. Not easy for Riner but he is simply too powerful with his reach and athletic body.

Riner won his third European European title: 2007, 2011 and 2013. For Okruashvili it was his best ever performance at the Europeans. In 2006 he won bronze at the open category and last year he was fifth. The Georgian had won the European Open in Tbilisi this year and finished second in Düsseldorf. The last time that both judoka  met was in their junior time in 2005.

Riner defeated Dutchman Grim Vuijsters in his first fight by hansokumake and overcame Robert Zimmermann (GER) and Renat Saidov on his way to the final.

Okruashvili was stronger than Aliaksandr Vakhaviak (BLR) and Jean-Sebastien Bonvoisin. In the final he beat Matjaz Ceraj. Georgia won the medal tally with three gold, two silver and bronze medal.

Okruashvili “I wanted to win in the final, obviously. I tried everything, but it was not enough. Riner was stronger than I was. So it is silver for me. Now I focus on the team event. We want to defend our title.”

Barna Bor set the hall on fire after winning a second bronze medal for Hungary today. The Hungarian heavyweight defeated Matjaz Ceraj (SLO) by oseikomi after 92 seconds in his last fight.

Last year Barna Bor won silver in Chelyabinsk but sharing such bronze medal with the crowd tasted much sweeter.

Bor: “It was hard to fight at home, but the crowd helped me. I can’t believe what I achieved. Before the last match my coach told me now you have to give it all and then you can relax after the European Championships.”

The tallest and smallest fighters fought eachother in the bronze final and the smallest won. “They are all taller than me, so I am already used to it. On his competition day: I was excited and impatient, because I really wanted to win a medal. I thought it was possible otherwise I wouldn’t have come here. It is my first (European) medal and this bodes well for the future.”

Jean-Sebastien Bonvoisin defeated Renat Saidov on the ground and completed a successful day for France in Budapest making a total of 11 medals, Riner’s medal was calculated in advance.

The champion said to us: “I didn’t feel my left leg today. I got a groin injury one week before the competition and it was tough to fight with one leg. Next time I’ll be on two legs again. But I am glad that I pushed through and gave it all. I got the medal at the end which is the most important thing. I prepared very well and it was frustrating to get injured. I was anxious all day, but I was able to overcome myself. On the team event: We’ll see if the pain will be better, but I think it will be hard (o do the team event.”