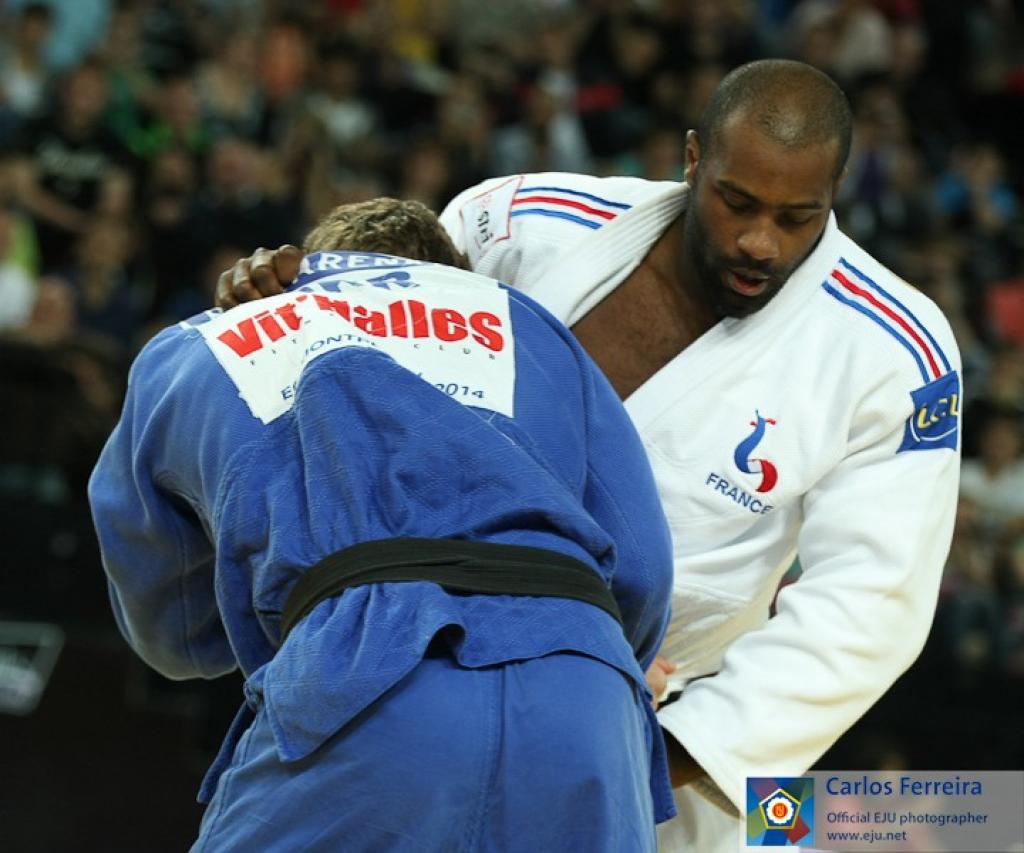 France’s top star Teddy Riner, Audrey Tchumeo (FRA), Lukas Krpalek (CZE) and Varlam Liparteliani (GEO) showed confidence in the preliminary rounds as the Judo European Championships continued in Montpellier, France. The last individual events are contested on Saturday in the women’s -78kg and +78kg as well as in the men’s -90kg, -100kg and +100kg.

Heavyweight Riner, cheered on by an enthusiastic crowd, quickly won his first match. His opponent in the semi-final, Stanislav Bondarenko (UKR) accumulated too many penalties and was disqualified. Olympic, World and European Champion Riner will face Marius Paskevicius (LTU) in the semi-final.

Top seed Adam Okruashvili (GEO) benefitted from his opponents being disqualified. There is one more hurdle to overcome on the way to the final for the European silver medalist: Andre Breitbarth (GER), who proceeded to the semis from pool B.

Audrey Tchumeo (FRA) looked like the one to beat in the -78kg. The current World bronze medalist needed less than one minute in both her matches to dispose of her opponents. Waiting for her in the semis is Luise Malzahn (GER).

In the -90kg, World silver medalist Varlam Liparteliani (GEO) did not have much trouble to advance to the semi-final where will face Krisztian Toth (HUN). The Hungarian advanced to the semis as his opponents were disqualified one after the other.

From the other side of the draw, a strong looking Kirill Voprosov (RUS) overcame second seed Zviad Gogotchuri (GEO) in the quarter-final. His next challenger in the semis is Alexandre Iddir (FRA).

In the -100kg, little known Adlan Bisultanov (RUS) upset World Champion Elkhan Mammadov (AZE) in the quarter-final by yuko. He has to deal with another Azeri in the semis, as Elmar Gasimov advanced from pool B. Mammadov still has a shot at the bronze medal.

Defending Champion Lukas Krpalek (CZE) looked in good shape and scored Ippon his two matches on the way to the semi-final. Cyrille Maret (FRA) will try to stop him there.

In the +78kg, European silver medalist Emilie Andeol (FRA) advanced easily to the semi-final and will face Franziska Konitz (GER) next.
From the other side of the draw, Larisa Ceric (BIH) prevailed over defending European Champion Lucija Polavder (SLO) in the Golden Score on penalties. Jasmin Kuelbs (GER) will join Ceric in the semi-final. Polavder can sill fight for the bronze.