RINER REMAINS AHEAD OF CHASING PACK 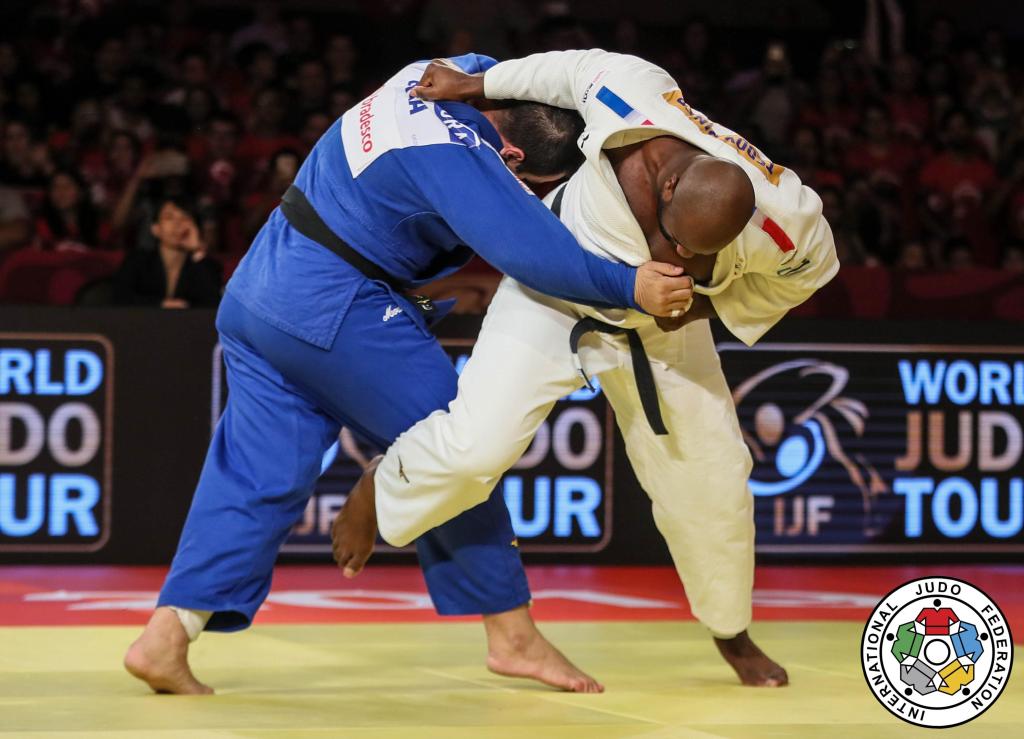 The third and final day of competition at the Brasilia Grand Slam saw Teddy RINER (FRA) take the gold medal in the +100kg category. This event marked a return to Brazil for Grand Slam judo, albeit in a move from Rio de Janeiro to Brasilia. Along with the packed, expectant crowd, there was a challenging line-up awaiting Riner who after his gold medal winning performance at the Montreal Grand Prix had decided to sit-out the world championships. Among the challengers and making his first appearance as newly crowned super heavyweight world champion was Lukas KRPALEK (CZE) whom Riner had defeated in Montreal in their only previous meeting. The unseeded Riner was drawn in the same half as Krpalek and so the scene was set for another show down.


Before Riner v Krpalek part two, there was the small matter of Riner having to get past the number two Japanese and Paris Grand Slam gold medal winner KAGEURA Kokoro (JPN). If not quite the best that Japan has to offer Kageura at the very least offered up an engaging contest and was certainly no push-over, the Japanese eventually going over to a huge harai goshi. In the quarter-final Riner came up arguably the best that Russia has to offer in the shape of Abu Dhabi Grand Slam gold 2018 Inal TASOEV (RUS). The 21-year old Russian came closest to scoring when he launched an o uchi gari attack that coincided with Riner’s own yoko sutemi waza effort. Upon review the referee commission decided that Riner’s landing could not be clearly attributed to the action initiated by Tasoev and no score was given. Riner had scored waza ari and held on to take his place in the semi-final.


And so, to the much-anticipated semi-final where Riner faced current world champion Krpalek. Regrettably this contest failed to live up to its billing and Krpalek, after committing three shidos, slunk away from the tatami to take his place in the bronze medal contest, leaving Riner to move to the final. There were hopes (not quite high) from the Brazilian fans that their man 2017 Ekaterinburg Grand Slam gold medal winner David MOURA (BRA) would be able put up a good show. But Riner was in no mood for hanging around and after only 15 seconds Moura found himself airborne on the receiving end of a stunning o soto maki komi for ippon.


Riner had seen off the challenge of if not all then most of the world’s most promising super heavyweights. All of the hopefuls were grand slam gold medal winners. Apart from Kageura (12) they were all top 10 fighters. And, as if to stamp the day with a seal of approval, Riner saw off the challenge of the current holder of the world title. It is difficult to see what else the “big man” can do to dispel the doubters and detractors. For the time being, however, the record speaks for itself; it matters little who they are or where they come, Riner remains the best, the greatest, crème de la crème.