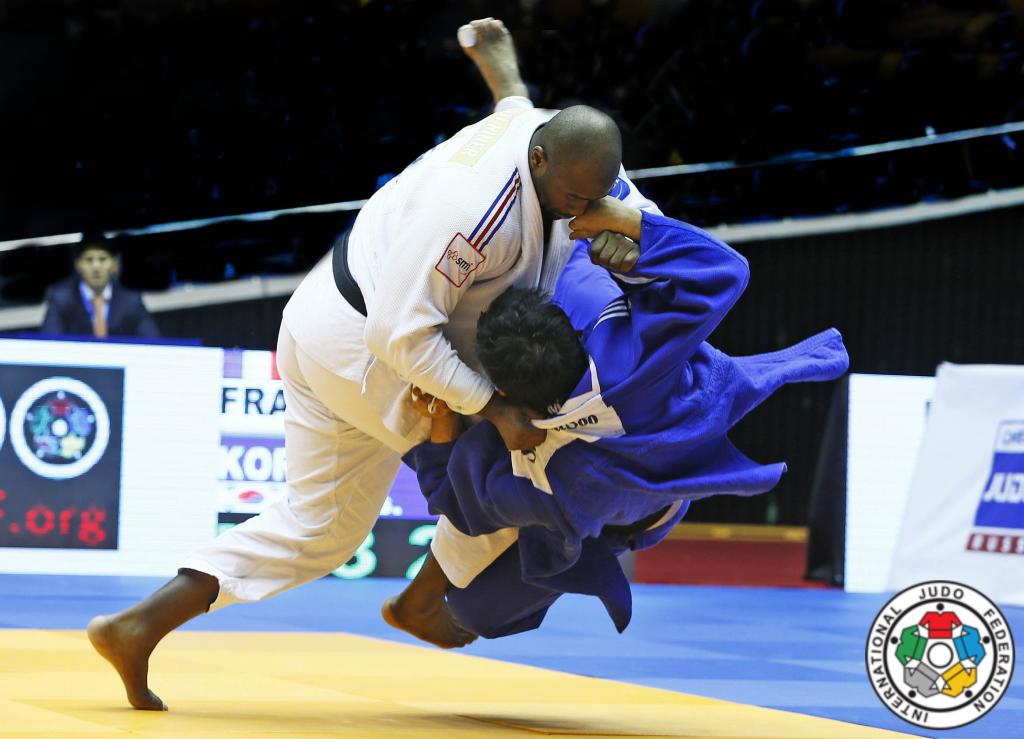 I doubt whether any superlatives remain unused by the media with regard to the winning performances of current Olympic champion Teddy RINER (FRA). It’s hardly surprising given the gulf at times between the French giant and the ever-increasing list of defeated opponents. Becoming a champion is in itself a notable achievement. But it is Riner’s complete and total domination of his category that marks his exploits as extraordinary. This assertion was given added weight today by the manner in which the eight times world champion secured victory in the +100kg category on the third and final day of competition at the IJF Grand Prix in Jeju.

Thormodur JONSSON (ISL) was Riner’s opening contest, the Frenchman as number one seed having had a bye in the first round. The pair came to grips easily when, after 30 seconds of manoeuvring, Riner launched a right-sided uchi mata that planted Jonsson squarely on his back for ippon. There was a degree of disappointment from the Icelander as he remained sitting on the tatami for a moment during which thoughts of what could have been flashed through his mind. But it was the first time that the pair had met and, perhaps next time, Jonsson may be able to offer up something more testing.

Riner’s next opponent was Jose CUEVAS (MEX). Once again Riner came to grips quickly, throwing the 20 year-old Mexican first with o soto gari for waza ari then, after two minutes, with o uchi gari for ippon. It must have been a daunting task for Cuevas the junior to face up to Riner the legend and, like Jonsson earlier, perhaps this first experience of competitive action against Riner may better prepare him for any future encounter.

The semi-final saw Riner up against more promising opposition in the shape of Roy MEYER (NED). Seeded number four at this tournament, the Dutchman has a fine contest record but, like Jonsson and Cuevas earlier, this too was Meyer’s first time up with Riner. Meyer made all of the early attacks albeit that they were merely probes as opposed to full out missile launches. Nevertheless, the net result was that Riner collected a shido for passivity and quite rightly so. This brought wry cheers from the crowd who appeared eager to engage in the David vs Goliath atmosphere. The advantage rested momentarily with Meyer, but that moment passed quickly and Riner moved with greater purpose to catch Meyer with uchi mata bringing the Dutchman down for yuko. Thereafter Meyer began to tire and it was a weary looking Meyer who, after a failed morote seoi nage attack, found himself having to tap out from a shime waza. So Meyer joined the line of first-time hopefuls with homework to do whilst Riner made his way to the final.

Homework for the defeated trio of Jonsson, Cuevas and Meyer was to sit and watch the final and see what insight home favourite KIM Sung Min (KOR) could offer up with regard to the benefit of previous experience. Kim knows Riner only too well having faced the Frenchman on eight previous occasions. After an uneventful minute and a half the contest suddenly exploded into action when Riner threw Kim with an exquisitely executed sasae tsurikomi ashi for ippon. Kim joined the aforementioned trio (figuratively speaking) to make up an unhappy quartet all of whose plans were dashed by an irrepressible and increasingly attractive force.