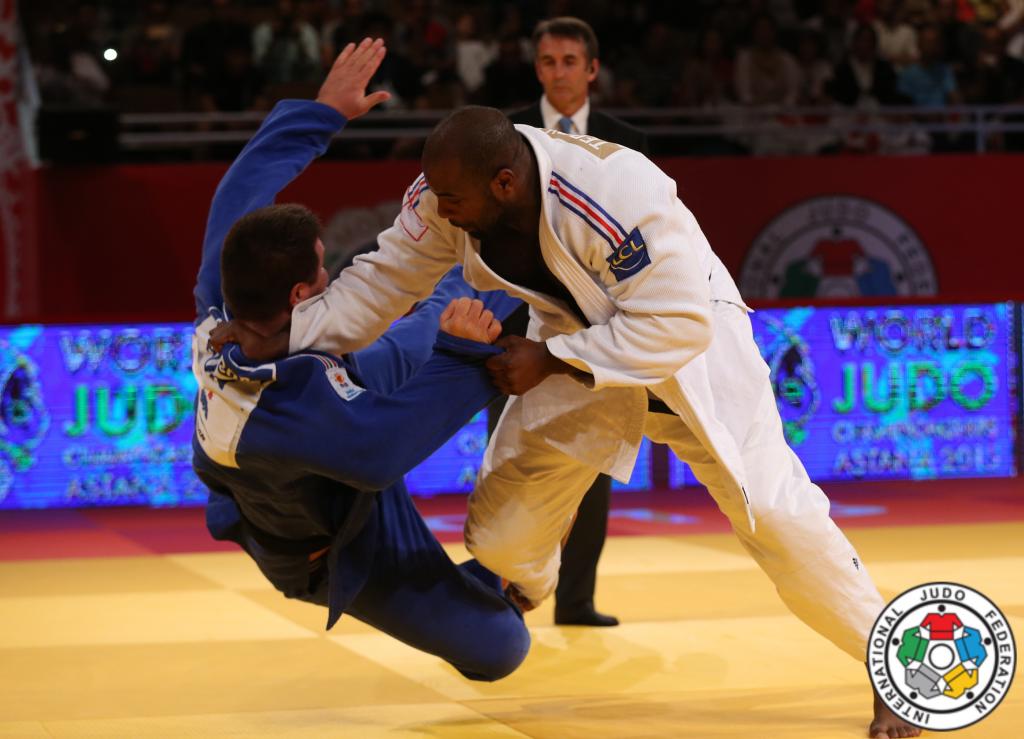 Normal service was resumed in the men’s +100kg category today when, after an injury lay-off of six months, Teddy Riner returned to international competition and top spot on the podium. Most mortals would not contemplate using the IJF World Masters as a first return to high performance competition. Riner however, decided to do just that and looked none the worse for wear. Riner defeated first Vladut Simonescu ROU whom he threw after only 17 seconds for ippon with a powerful right o uchi gari. In the quarter-final it was Levani Matiashvili who for the first time in his career had the task of facing the French giant. But when Riner launched a huge harai goshi the Georgian, despite getting a hand to the tatami, was unable to prevent himself from going over for yuko after which he was held with kesa gatame from which he submitted.

This brought about a semi final with arguably Riner’s most testing opponent on the current international circuit Shichinohe Ryu JPN. The Japanese heavyweight was unable to make any real impression on Riner and with 2:21 left in the contest Riner leapt into a titanic o soto gari that brought Shichinohe crashing to the tatami for ippon. The final saw Riner facing Hungary’s Bor Barna whom Riner had defeated on three previous occasions. There was little that Bor offered up that one could say truly tested the Olympic champion. It seemed as though the crowd (that included HRH Moulay Hassan, Crown Prince of Morocco) would have to settle for a tame win.

But Riner had other things on his mind and with only seven seconds left on the clock, he once again produced his trade mark, bone-crunching o soto gari, despatching Bor for ippon and in the process collected his third Masters title. The crowd leapt to their feet cheering their adopted champion wildly. Even His Royal Highness managed an approving smile of appreciation and polite applause before making his way to the podium to present the medals.

There were gold medal winning performances too from Beka Gviniashvili GEO in the -90kg category; from Elmar Gasimov AZE in the -100kg category, and Kim Polling NED in the -70kg category.