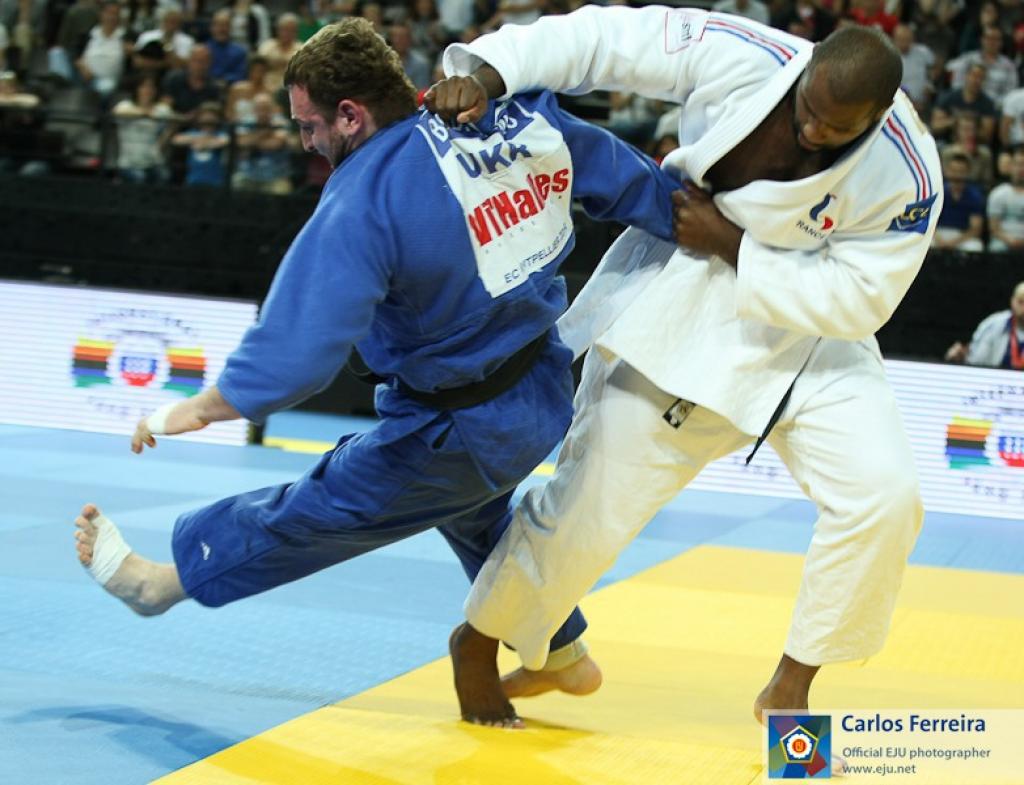 Heavyweight Teddy Riner (FRA) took his fourth European title in front of an ecstatic home crowd Saturday as the individual competition of the European Judo Championships wrapped up in Montpellier, France. Audrey Tchumeo (-78kg) and Emilie Andeol (+78kg) added more gold to the French medal haul. Varlam Liparteliani (GEO) recaptured the title in the -90kg and Lukas Krpalek (CZE) defended his title in the -100kg.

In what was a repeat of last year’s final, Riner met Adam Okruashvili (GEO). The Georgian had two shidos already when Riner threw him for Ippon with one minute to go in the match. In the semi-final, the French giant sent Marius Paskevicius (LTU) to the bronze medal match ahead of time as well. “It always a pleasure to compete at home and it is nice to come back after eight months of absence. But there is still a lot to do. I didn’t feel like I was so strong today, my judo is still lacking dynamic and my physical condition is still lacking”, the Olympic and World Champion noted.

Okruashvili narrowly defeated Andre Breitbarth (GER) in the semis. Breitbarth had to go into the Golden Score against Matjaz Ceraj (SLO) to secure the bronze medal. “I am extremely happy with bronze. This is my first European Championship at the senior level, I always missed it because of injury. I take from here that you always have to fight until the very end”, he said. Paskevicius claimed the other bronze medal. “It my second medal and I feel very good about it. The bronze medal match was the hardest. To fight Riner in the semi-final was interesting. You need to be very technical to beat him. Maybe next time I can do it”, the Lithuanian commented.

Tchumeo had a tough semi-final against Luise Malzahn (GER) and scored a yuko in the last seconds only. In the final against Marhinde Verkerk (NED), the 2011 World and European Champion achieved a waza-ari and held on to this lead until the end. “I like to compete at home, the French audience gives me a lot of power. For me, it was obvious that I wanted to come here and enjoy it”, Tchumeo said. “This is just the beginning, now I want to go on and do everything to win the world title again”, she added. Verkerk beat 2012 European Champion Abigel Joo (HUN) in the semis but could not overcome Tchumeo. “She was so strong and she was better than me today”, the Dutch judoka admitted. “This is the beginning of the Olympic (qualifying) season, so it is important to have a medal. I think I am on a good track”, Verkerk continued.

Joo and 2013 European Champion Lucie Louette (FRA) earned the bronze medals. “This medal means a lot to me, looking at how I started the season, getting disqualified all the time. Now I managed to adjust my judo to the new rules. The first two contests went well, in the semi-final I beat myself”, the Hungarian analyzed. Louette had hoped for more than bronze. “I am disappointed. I felt on fire today. But coming back after five months and with just one of training under my belt this is still a good result. I am just very demanding of myself”, the 2013 European Champion told the press.

Emilie Andeol beat Franziska Konitz (GER) in the semis by yuko and prevailed over Larisa Ceric (BIH) in the final by penalties to claim her first European title. “This is really the most beautiful day of my life and I’ll never forget it”, the 2013 European silver medalist said. “I always said that one day I want to be European Champion, and now I did it. It is especially wonderful to have done it here in front of my family and friends.” Ceric earned her first medal. “Of course, I would have liked the gold. However, the final was very hard, she (Andeol) is better now and I felt a bit tired, I had a some hard matches before the final, especially against the German (Kuelbs) who had beaten me before”, Ceric shared.

Kuelbs and Konitz went on to pick up the bronze medals. “It is my third bronze and it is satisfactory. But I could have done more today. I think that the French (Andeol) and I are pretty equal and just tiny mistakes make the difference”, Konitz said. “I feel great about my first bronze. I lost the semi-final due to my own mistake, but overall I felt good and it is nice to be rewarded with a medal. It was my goal to win a medal, but one day I want to be European Champion”, Kuelbs commented.

Varlam Liperteliani recaptured the title in the -90kg after losing last year in the final. This time, he defeated Krisztian Toth (HUN) in the semi-final by waza-ari and then threw his final opponent Kirill Vorprosov (RUS) for yuko. That was enough to take home the gold. “I am so happy to have won the second time. The quarter-final against Bauza (LTU) was hard, because he scored waza-ari, but then I managed to catch up. This win is good for my result and for my judo mentality. Now we have the team competition coming up and hopefully we’ll take another gold medal”, the World silver medalist said.

Voprosov relegated Alexandre Iddir (FRA) to the bronze medal match before losing to Liparteliani. Last year, he had won a bronze medal. “Getting a bronze is a victory, getting a silver is a defeat”, he noted. “It doesn’t really matter if you are second or third, you are not the champion. I had to lose seven or eight kilos of weight before I came here”, the Russian revealed.

Iddir and Toth shared the bronze medals. “I had to wait long for this and having a medal is a relief”, Iddir told the press. “I have worked very hard in training for this. In the semi-final, I think I was lacking experience a bit”, he continued. Toth was happy with his result as well. “Honestly I didn’t expect it. I felt really bad this morning and knowing that I can’t throw my opponents I had to focus on tactics, which worked out. I am really happy that was able to come out with a bronze”, the Hungarian judoka explained.

In the -100kg, defending champion Lukas Krpalek (CZE) needed to go into the Golden Score to overcome Cyrille Maret (FRA) in the semi-final. In the final, the Czech pinned his opponent Elmar Gasimov (AZE) to the ground to achieve ippon just second before the match ended. “I am so glad that I was able to keep the title. I had a shoulder injury and it was tough. To win last year was also tough, because I had to fight (Henk) Grol (NED). Now I am very motivated for the Olympic Games. I really want to get a medal there”, Krpalek said.

Gasimov beat up and coming Russian Adlan Bisultanov in the semis by shido. He added the silver to his bronze from 2012.

Maret and Bisultanov came back to claim the bronze medals. The Russian needed just 14 second to achieve ippon in the bronze medal contest against Toma Nikiforov (BEL). “I was a little upset about how I lost the semi-final, so I was angry. I was confident that I would get a medal today, I was ready for it”, Bisultanov said. He didn’t even let World Champion Elkhan Mammadov allow to stop him, beating him in the quarter-final. Mammadov then lost in the repechage match. Maret defeated Karl-Richard Frey (GER) for the other bronze medal. “Obviously I was going for the gold, but overall I am still pleased. It was a good day. The semi-final was a bit disappointing. I hope to get my revenge over Krpalek at the World Championships”, Maret commented.