Riner wins the triple in Paris 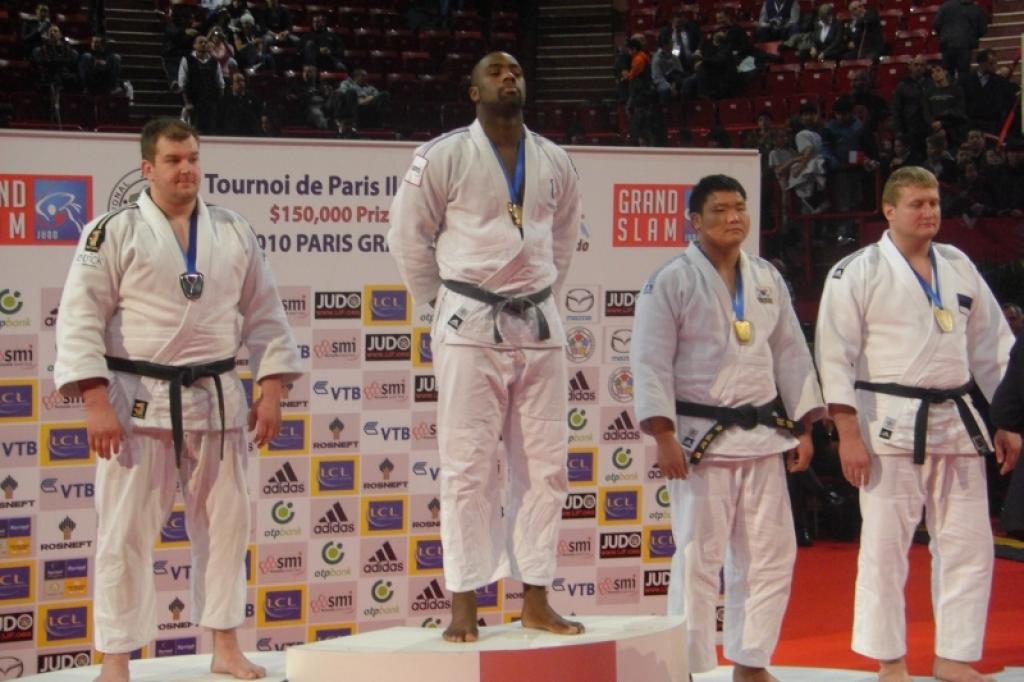 All eyes were focused at French heavyweight Teddy Riner who is incredibly popular in France. In the final he defeated European silver medalist Grim Vuijsters (NED). Riner lost to Vuijsters in 2008, but the triple world champion has developed quite a bit since than.
Despite his height advantage Riner couldn’t get grip on Vuijsters for a long period during the match, but was awarded a yuko after a penalty for Vuijsters halfway the match. Another penalty followed with one minute to go and Riner good defend his championships title.
Vuijsters never reach a final of a Grand Slam or Grand Prix and was satisfied with silver and the way he reached the medal.

U90kg
Takashi Ono (JPN) fought a tough match in the semi final against 2008 Olympic finalist Amar Benikhlef (ALG), but made the difference in the last 80 seconds with a take over and could easily work to the ippon on the ground.
Another Brazilian, 2007 World Champion Camillo Tiago (BRA) was strong today U90kg but couldn’t resist Dilshod Choriev (UZB) who keeps in collecting medals at the major IJF events in the world. He won in Abu Dhabi last year, and won bronze in Tokyo and Suwon more recently.

Ono finished second last year in Paris and collected four medals in total, but never won the gold medal. But this year it was different. Ono had a tough opponent in Dilshod Choriev but defeated him with a smashing uchimata. Perhaps the best ippon of today.

U100kg
The final U100 kilogram between Elco van der Geest (BEL) and 25-year old Sergey Samoylovich (RUS) started to become more interesting after two minutes when the Russian scored a yuko. Samoylovich defeated favourite Hee-Tae Hwang (KOR) in the second round and won the World Cup of Tblisi last week, so was definitely an outsider to win the title today.
But Van der Geest won the international tournament of Visé (BEL) last week and was also growing in the tournament. Halfway the final Van der Geest watched carefully and timed his attack thoroughly with an ippon as result.

Former European Champion Elco van der Geest is fighting for Belgium since the World Championships. He never won a medal in Paris despite competing for Holland for 15 years and in Paris since 2003.

But Van der Geest is back on track after seriously thinking about retiring with Henk Grol as competitor in The Netherlands. But Van der Geest had a good period last year and with a coach Louis Wijdenbosch he started to see new chances. While Grol is recovering from a knee injury since the World Championships, Van der Geest is as good as 8 years ago when the talent took the European title in 2002 together with his brother Dennis.
Maybe Van der Geest can start to dream about London. Van der Geest can become the oldest ever Olympic Champion, nothing is impossible.

27-Year old Tsirekidze also said earlier he was about to retire, and Paris would be his last event. But after seeing the World Cup as a spectator and with the good performances of his teammates, he thought differently. Good for his motivation that Tsirekidze can still measure with the best and took the bronze today.

World Champion Maxim Rakov (KAZ) was sent home by Cyrille Maret (FRA) who lost to Tsirekidze in the quarter final.

U70kg
The performances of Lucie Decosse are unbelievable. She won the Tournoi de Paris for the sixth time today and equals the overall record with Lebrun. Decosse defeated Anett Meszaros at home soil
Meszaros defeated Yoriko Kunihara in the semi final on decision. Good news for Decosse who had lost to Kunihara In January in Suwon at the IJF World Masters. But today the crowd supported Decosse against Meszaros with the complete capacity of the Bercy Stadium, again fully packed with 10,000 spectators. Decosse decided the match with a perfect barai against Meszaros and enjoyed the applause by the public.

U78kg
Céline Lebrun (FRA) and Paris, two characters, but totally in love. Lebrun had won the Tournoi de Paris six times, but was surprised after 16 seconds in the semi final against 23-year old Sayaka Anai. French icon Lebrun is currently 33 years but still fit enough to concur Anai. Lebrun defeated Anai last year at the Tournoi de Paris and this year in Suwon, but youngster Anai took revenge today. In the final Anai had to deal with Akari Ogata, the U20 World Champion. A repetition of the final of the IJF Grand Slam of Tokyo in 2009, where younger Anai won, but today Ogata was able to beat her opponent in the last 20 seconds.

O78kg
In the heavyweight class in the women’s category European Champion Elena Ivaschenko (RUS) beat the world’s bronze medalist Idalis Ortiz (CUB) in the semi final and defeated Nihel Chikhrouhou in the final. Chikhrouhou is the first woman of Tunisia to be able to reach the final at the Tournoi de Paris. Heavyweight Anis Chedly won the Tournoi de Paris in 2005 as first man.
Ivaschenko is only the second Russian woman to win in Paris, after Natalia Kuzyutina won in 2009.

Watch our photo gallery in our media section.