„It is my dream that my long lasting hard work and practice will be honoured with an Olympic medal. “ 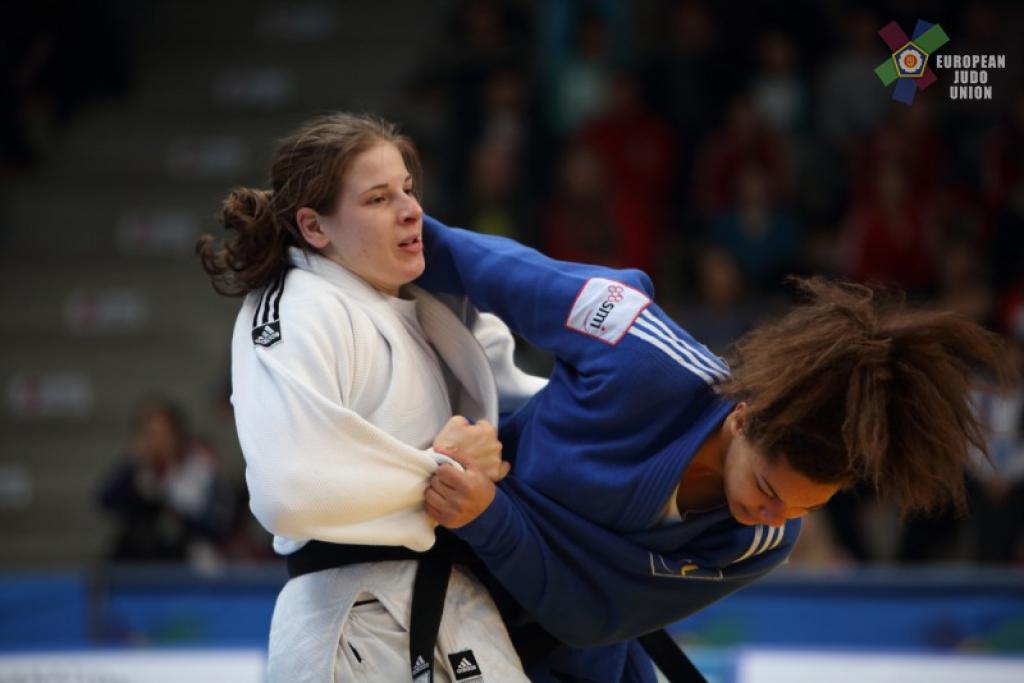 The qualification for the 2016 Rio Olympic Games slowly approaching half-time whilst our athletes are training hard on the daily basis to achieve their biggest and yet wildest dream. It was only few weeks ago when WRL 5, Bernadette Graf overcome two world medallists to take the victory at the European Open in Oberwart where she had the opportunity to show her dedication front of the home supporters. Graf is certainly alongside those players who set herself a precious dream… The Olympic Dream.

When and where did it all begin…?

Bernadette started Judo at the age of six at her local club in a small village, called Ampass in Austria. However, Judo wasn’t the only sport for her at the time. „For a short time, my parents wanted me to try ballet and gymnastics but after a few lessons they gave up… I would always come home crying because I hated it. Then I started judo and got stuck in.”

A year passed by when Bernadette first experienced what it’s like to be in a judo tournament and she returned home with a silver medal from the Christmas Cup which was held around the area. Yet, her debut in judo happened a few years later: „At the age of 14, I won my first bigger tournament. It was a test tournament for the national team in Leibnitz. That tournament was the ticket to my judo career. “

Young athletes don’t just wake up one day and decide to aim for an Olympic medal…the majority of the time there is something more behind it… or someone who lifts up the level of motivation. „I always have been taking a leaf out of my team mate Sabrina Filzmoser. She is an absolutely fascinating person and a great judoka. “– explained the winner of the 2014 Astana GP

What else can be more satisfying in a life of an elite athlete than accomplishing their dream? What would it mean to Bernadette to represent her country at the 2016 OG? „The Olympic Games is a very special event that only takes place every four years.  I am sure that getting to the games is every judoka’s dream but only the best can achieve it. It is my dream that my long lasting hard work and practice will be honored with an Olympic medal. “ …

…  „If I will take part at the 2016 Olympics, winning a medal will clearly be my main goal. I have been preparing for this event for a long time. I practice for one special moment and I want to stand on the podium at the end.“ – she added

We often hear people say ‘Judo is more than a sport’. Does she agree? BG: “It is a great statement and it is totally true. You don’t only need power and endurance but also speed, concentration, self-confidence, courage and discipline. All these things are also needed in everyday life. You don’t do judo: YOU LIVE IT!”

Bernadette began the New Year’s preparation on home soil with the Olympic Training Camp (OTC) in Mittersill whilst keeping in mind few of her key targets she set herself for this year. One of those goals is to repeat her result of the Europeans from last year or do even better; whilst she is also aiming for a spot on the podium at the World Championships.

Young athletes’ early success often gets carried away and some occasions it can result an early exit in their career. The Austrian judoka is one of those very few athletes who shined at the very young age and drawn her name into the history book after winning both, junior European and World titles. Junior and Senior levels are both very competitive; however a fairly big gap can still be seen. Double Senior European Bronze medalist also believes the difference is big between the two ages band: “In my opinion there is a big difference between Junior and Senior level. The biggest disparity is the power and the experience of the fighters. The Seniors can ‚read’ the fight easier and make less mistake. A younger fighter has to learn this step by step. “

To grow in from Junior to Senior takes sometimes…well, normally. However, Bernadette adapted to these changes within a short period of time. What is her secret? BG: „I don’t think that I have a real secret. I am lucky to have the best national coach and the best team mates by my side. My coach has always known the things I could do better to tie up to the elite.”

Grand Prix medals lining up next to each other on her shelf, however the most memorable moment of her career (so far) still remains from the days of being a junior fighter: “For me, the most memorable medal is the gold medal at the junior European Cup in Paks (Hungary) in 2009. It was my first great win at a big international tournament and at the same time I could beat my two greatest opponents at that tournament. On this day I realized that I have what it takes to achieve something huge. “

Each athlete has something what drives them to strive for success and wanting them to be the best in the World. What is the driving tool for Graf? „I want to be the best in my sport because I work very hard for it. In addition, it is the best feeling to get rewarded with a gold medal for all the sweat and effort I have put in.”

Recovery is also an important factor of becoming the best in your chosen sport. Some likes to just simple rest off the weekly hard work whilst others chosen to do different activities to take their mind off judo. BG: “I love to do other sports like skiing, hiking, swimming, playing basketball etc. Every now and then it is the best just to lie on the couch. I love going to the cinema, meeting my friends or just look after my sister’s dogs. “– recapped the 2014 Abu-Dhabi GS silver medalist

Holiday is not a regular word in a vocabulary of an elite judo player and due to the high demand of travels which the qualification schedule requires; Graf prefers to spend her free time and holidays at home with her family, friends, or just enjoying the beautiful view of the mountains from her apartment.

As always, we asked three wishes of our Olympic hopeful… Graf: “Olympic medal; to be as tied up with my family forever as I am now; having a holiday house at the beach.“