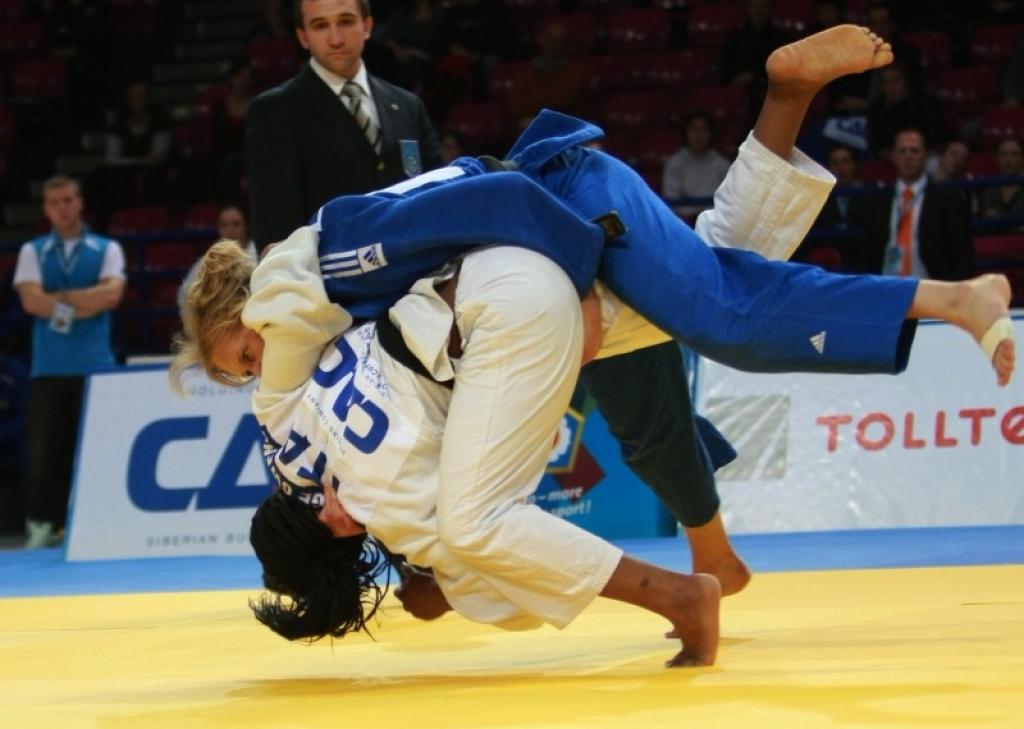 The 2016 Olympic qualification is about to begin in few days’ time at the European Open in Madrid. We will be witnessing some returners on the mat with great potential to be part of their national team for the next Olympic Games. Holland born, Georgian representative Esther Stam will be one to watch at the upcoming two years. Esther Stam started judo at the age of six in the east of the Nederland’s. Esther’s first major medal was when she won gold at the U17 European Championships by being only 15. Her inspiration to become an Olympic Champion hit her at the time of the Sydney Olympic Games. “The first Olympic Games I really followed was Sydney in 2000. Mark Huzinga became Olympic Champion and that was amazing to see.” – she remembered. “However, I was also impressed and encourage by the judo skills of Tani, Nomura and Inoue…, and when I visited the Athens Olympics in 2004 and the moment when saw Ayumi Tanimoto and Ilias Iliades became Olympic Champions…that moment really inspired me to train harder and try and became a top level fighter.” – she added. After all the inspiring stories the need to ask what does judo means to her felt necessary. Esther: “Judo for me means a lot of things. It means a game and fun but also discipline and respect. Judo means a lot to me because it gave me a lot of joy and opportunities in life which I wouldn’t have without it.” How she feels about the world’s biggest mega-event? “The Olympic Games is something special, it is the highest podium to perform because it is only once every four years and only the best of the world can go to the Olympics. I think a dream of many judoka to fight at this stage.” – Esther expressed her view. Besides building back her judo career, Esther also works at the ING Bank in her country at the marketing and communications department, so free time is not much she has in her hand. However, if and when she has sometimes off, she likes to spend it with her friends and family…and if happens to have even more time than just a quick coffee with the friends, she also likes to travel to different festivals. Esther has a passion for art and creative things, but to explore that at her full interest she might have to wait until the end of 2016. As it is known, to be eligible to take on the challenges to qualify for the Olympic Games you must have a representative country. As many athletes lately, Esther also had to change her representative country to be able to begin the qualification for the 2016 Olympics. Sometimes some athletes are strong internationally but struggle to get out of their country to prove themselves which can be a real heartbroken situation for many. Esther Stem has been representing her birth country until now, and she is ready to make her debut besides the already exceptionally successful Georgian male team. ES: “With Georgia I have a real chance to reach my full potential, whatever it may be. The changes mean that I get a chance to prove myself at the U70kg category. For me it is still going to be a big challenge since I haven’t been competing at big tournaments for a while. However, I have a real chance which makes me very happy and thankful.” Esther is now part of an incredibly successful male judo team and surely she is ready to handle the female part of the team by herself and carry the already often seen Georgian flag. Throughout the qualification she will be training at the Nederland as well as in Georgia. Besides getting used to competing at such a high level Esther shared her main target for the upcoming two years: “My main goal is to become a top level fighter once again. This means getting medals at the IJF tour and my dream of course is to qualify for the 2016 Olympic Games.” And at last, Esther’s three wishes: Be able to do judo at a high level for a few years with the target of becoming Olympic Champion. Have enough time to spend with my close friends and family in a warm and sunny place. Create and accomplish cool ideas/things within the marketing and communication area.