"As a child I always watched the Olympic Games... I remember that I wanted to be like those Olympic athletes and represent Finland..." 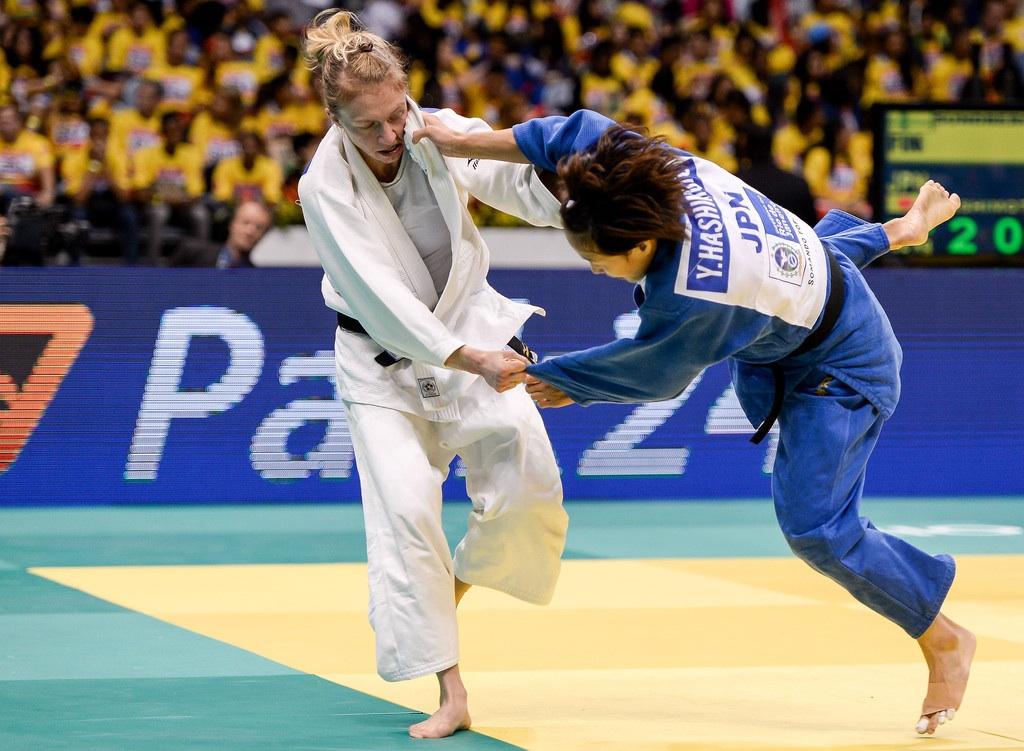 Finland’s female judo Olympic hopeful, Jaana Sundberg, began the year by winning a silver medal at the African Open in Tunis to earn additional qualification points on her way to the 2016 Rio Olympic Games. London 2012 Olympian is a proud owner of 11 senior national titles. Currently sitting on 13th position of the world ranking, Jaana is ready to take on the next challenge this weekend at the Grand Prix in Tbilis, Georgia.

It wasn’t until the age of 11 when Jaana first heard about the sport judo. She started judo in her home town called, Riihimaki, where her friends influenced her to put on the ‘pyjamas’ which she hasn’t left since. “I didn’t know much about judo. I had only seen the Karate Kid movies and thought that it is similar. As from the start, I liked the trainings a lot and the atmosphere at the club was good. All in all, it was nice to train and I enjoyed it so it was easy to get hooked in.” Jaana was in good hands from day one, as two third of the London 2012 team was from the judo club in Riihimaki.

Shortly after Jaana get used to the training regime, she was ready to compete at a white belt rumble where she won her first ever gold medal. This was enough for her to realise that she wanted to do more competitions, yet she admitted that competitiveness appears on her day to day life. “I never like to loose, not even for my niece in board games…”

Two years after winning her first medal it was time to begin to see the world. The first international tournament she attended was in Sweden where she was competing mainly against Nordic countries, however, as she explains, her real first international event was the World Youth Games in Moscow 1998. “That was my first connection to my fellow competitors world wide. I lost in the first round and I was very disappointed. But it made me realise that I needed to work more to be better.” – admits the 2013 Moscow GS winner.

World Youth Games… was it enough to decide she wants judo for life? Not quiet. At the time of her Cadet years, Finland has not held any Cadet national championships, therefore at age of 14, Jaana left with no choice but to compete at the U20 age group where she won. During these years judo wasn’t the only sport she excelled at. Football and Judo trainings had to be juggled throughout the week to make the most out of both. However, after she won the national title an age band above, gave her the green light on what she wanted to do.

“I chose judo because I wanted to win something big.” – states the bronze medallist of the 2013 World Military Championships. ‘Military?’ That’s right, besides her hectic training schedule, Jaana is also part of the Finnish Defence Forces and Sport School, so when off the tatami, she has other tasks to complete. Due to her hectic life-style, free-time doesn’t come around often. If it does so, she likes to have a time out with her dog, and yet if her free-time extends to a longer period, she would go for a short trip somewhere. For holiday, in her words, its anywhere where its hot, but if she had a choice the Caribbean sea or Southeast Asia would be on the top of her list.

Going back to Jaana’s child-hood and THE Olympic Dream… Jaana always been a big fun of the Olympic Games, whether it was a winter or summer Games she would be glued to the television. Finnish Olympic champions skier, Mika Myllylä and ski jumper, Matti Nykänen both played an important role in Jaana’s childhood. “As a child I always watched the Olympic Games even when the Games was on during the night, like Nagano (1998) or Sydney (2000). I remember that I wanted to be like those Olympic athletes and represent Finland.” – recalls the 2014 Paris GS silver medallist.

Mentioning Paris, winning the silver medal at the Paris Grand Slam remains her most memorable tournament so far and not only due to the incredible atmosphere that Bercy Stadium can provide but also due to the fact that amongst the very few Finnish Judo players who medalled at Paris tournament the last one happened to be 20 years ago. Besides that the Finnish judoka likes to have a bit of a competitiveness in everything she also treasures judo, as she explains, for the challenge she can set herself to do her best during each training session.

London 2012 was Jaana’s first Olympic experience which she described as “a great experience and I will remember it for the rest of my life… although the result wasn’t good, still it was an honour to be part of the Finnish Olympic team and also the international judo family.”

Heading towards Rio 2016 there are quiet a few obstacles to overcome. For Jaana, there was a long-lasting injury set her back to meet her full potential last year, which she managed to overcome by now. Staying healthy and injury free will surely be one of the priorities for her, but what else is on board for this year? JS: “My main goal this year is to compete on a good level at the Olympic qualifications and to collect some points for Rio. Of course, I focus also on the major championships but more important than for example the Worlds is to stay healthy and to compete well all year around.”

Over 20 years of judo… what was the most difficult situation she had to face throughout the decades? JS:“Big injuries are always difficult to deal. You might just be in your best shape and then you have some trauma that can only be fixed by surgery. Rehabilitation and coming back to competitions demands determination, hard work and lots of positive thoughts, especially when you feel down about what happened. Having said that, when you are back on the tatami and able to perform even better than before, it feels really great.”

Three wishes of our Finnish Olympian: “I only wish many healthy days for the rest of my life!”