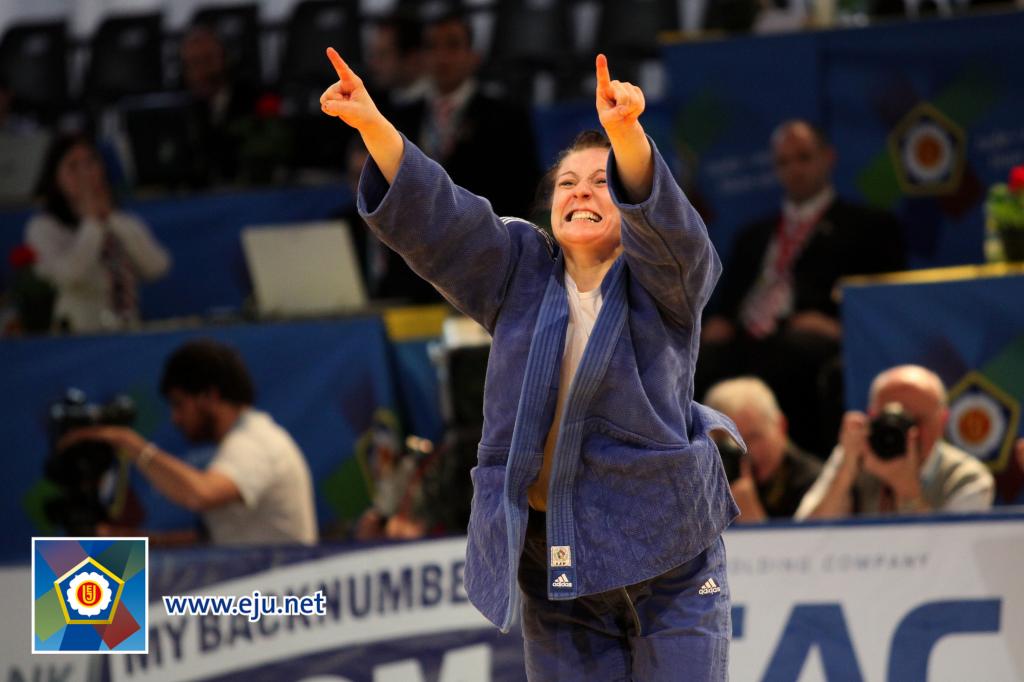 Olympic Champion from Romania Alina Dumitru took the gold medal in the Hamburg Sporthall. In the final Dumitru defeated Aida Sarmiento from Spain. Germany celebrated the bronze for Michaela Baschin who defeated Belgian Amelie Rosseneu who had won the European Cups in Sarajevo and London this year.

Viola Waechter won bronze by an ippon after two minutes against Ben Liraz. The fourth bronze this year for Waechter after Rio, Sao Paulo and Moscow.
The German spectators clapped for Sandy Nisser who defeated Dutch Carla Grol.
The final however was a complete Romanian battle. European Champion Corina Caprioriu took the gold medal against he compatriot Andrea Chitu who was very strong today as well. The small Chitu (22 years) is European Champion as well, but in the military division. Last year at the German Open in Sindelfingen both women fought each other for bronze which Caprioriu won as well.
Today Caprioriu was leading with a beautiful waza-ari which could have been ippon halfway the match, although the speedy Chitu is hard to topple and kept Caprioriu busy for the remaining minutes.

In the men’s category U60kg Briton Ashley McKenzie took the gold medal. McKenzie defeated Swiss Ludovic Chammartin in the final in a strong list of participants. McKenzie defeated Ludwig Paischer in the prerounds, but he was ill today but wanted to make a match today to feel some tension in his preparation for the World Championships.
McKenzie is one of the great high potentials of Great Britain. Last year he won the bronze medal at the European U23 Championships. But in all honesty the Brits definitely need a talent and need more medals towards London 2012. 21-Year old McKenzie gave the good example.
Two German judoka won bronze: Tobias Englmaier and Robert Kopiske.

In the final U73kg strong Rasul Bokiev from Tajikistan couldn’t show his usual skills due to an injury at his leg, but Christopher Voelk fought a tactical good match against Bokiev who won the bronze medal at the Olympics in Beijing and bronze at the worlds in Rio in 2007.
Bokiev who’s 6 years older than his German opponent was penalized three times, but couldn’t stand the ambitions of the Abensberger who won the gold.
Swiss Nietlispach and Israeli Palelashvili won a bronze medal.

The final U63kg could have been a fantastic fight between Slovenian Urska Zolnir and German favorite Claudia Malzahn.
Zolnir who didn’t had to fight the semi final against Dutch Anicka van Emden, who came here to gain more handling speed, was fresh for the final, but was thrown in a great ippon by Malzahn after 51 seconds. Malzahn is one of the major favourites for the World title in September gained a lot of strength and came back very strong after an injury.
Malzahn defeated Zolnir for the 6th time in seven matches, but lost in 2008 in Tokyo, so she is warned as well.

54 German women were present in Hamburg against 25 Dutch women. The women’s heavy weight category was a Germany – Holland match.
The Dutch brought their national team to ‘train’ at this European Cup. Carola Uilenhoed didn’t fight at many events and was happy to reach the final in Hamburg.
Against Franziska Konitz Uilenhoed took the advance to feel another top match. Uilenhoed defeated her twice, but today it was the taller Konitz who defeated the double world medalist by a great uchimata.
European Champion Lucija Polavder (SLO) won the bronze medal defeating the leader in the European Cup ranking Sarah Adlington (GBR). The other bronze went to 19-year old Larisa Ceric (BIH).

The men U90kg had a strong quality field of participants.
Swiss Dominique Hischier defeated double Olympic medalist in 2004 and 2008 Roman Gontyuk for bronze. European Champion Marcus Nyman from Sweden was fighting Andrei Kazusionak (BLR), the previous European Champion for the other bronze. It was Nyman who made the difference by waza-ari after Kazusionak led the match by yuko.

Today’s final however was quite a surprise. Dutch Robby van Laarhoven took the gold medal by beating Milan Randl.
The 28-year old Dutchman, a four-times Dutch finalist who’s nemesis Guillaume Elmont is Holland’s first choice, was amazingly strong today. Van Laarhoven is back after an injury in his new category U90kg and showed perfect judo today. In June he surprised winning silver at the European Cup in Celje where he lost to Winston Gordon, but today 23-year old Milan Randl of Slovakia was defeated with two waza-ari.
For Van Laarhoven his best ever victory in his career at the age of 28. Maybe not his most valuable, as taking the silver in Celje just after he was operated for a back injury was just as special. Van Laarhoven now has 4 pins in his back and in fact got a new back. Quite a performance.

The men’s heavyweight category Andreas Toelzer and Matthias Schmunk gave the home crowd at least a German final, although they may have expected Robert Zimmermann in the final, who won the IJF World Cup Brazil on Sao Paulo.
Andreas Toelzer showed everybody that he’s the undisputed first choice of his country defeating Matthais Schmunk in 19 seconds by a great point. Zimmermann was already selected as well for the Worlds.
Bronze medals went Dutch Luuk Verbij and Thomas Pille (GER).