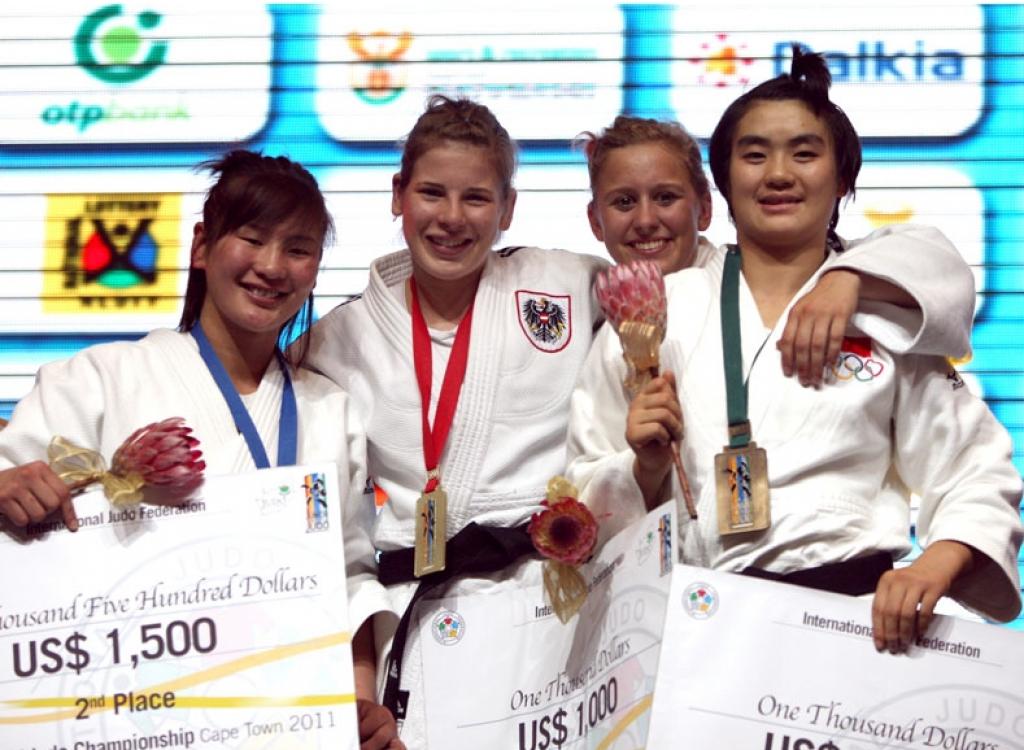 Russia was today’s European outperformer at the third day of the World Junior Championships in Capetown with an all Russian final U90kg where Kazbek Zhankishiev won the world title. Remarkable however was Austria’s gold medal by Bernadette Graf. She is now the third ever Austrian world champion after Robert Köstenberger in1976 and Patrick Reiter in 1992.

Graf became European Champion U70kg in September in Lommel and today she needed to defeat four opponents. A tough draw led to her first match against Lola Mansour, Belgium’s hope for future medals. But the 18-year old Graf was stronger than Mansour who won bronze at the Europeans in Lommel. Graf defeated French champion Posvite and Chinese Chen in her road to the final. Naranjargal Tsend-Ayush is 6 month older than Graf and more experienced in senior championship. Graf however was in a superb shape and defeated her opponent by ippon after she took advantage of a big mistake of the Mongolian and immobilized her on the edge of the tatami, giving the first Junior world title to Austria, in Cape Town. It’s the most successful junior championships for Austria.

In the category U63kg Japanese Haruna Ota won the final against Polish Halima Mohamed-Seghir. From the beginning of the final, the match seemed to be a one-way ticket to the gold for the Japanese, who largely dominated her opponent and scored ippon one minute before the end.
European judoka won the bronze medals: Kateryna Lyanlina (UKR) and Clarisse Agbegnenou (FRA).
European Cadet Champion Jemima Yeats-Brown (GBR) finished fifth after her loss to Agbegnenou. Clarisse Agbegnenou was one of the favourites in advance as she had won the senior Grand Prix in Abu Dhabi in October but she lost to Ota in the quarter final.

In the men’s category Russia ruled today. Especially U90kg where two Russian athletes were qualified after having defeated all opponents. Knowing one-another very well, the match seemed to be very tight, when suddenly Kazbek
Zankishiev launched an amazing and terrific shoulder movement, that sent into the air Khusen Khalmurzaev, who landed on his back for ippon.
Khusen Khalmurzaev entered final after defeating the National Junior Champion of the Netherlands, Michael Korrel in the semi final. Zankishiev defeated Ben Fletcher (GBR) in the semi final and in total he was victorious over six opponents today. Fletcher won bronze as well as Stanislav Retynskyy from the Ukraine. A fully European stage with Russian national anthem.

As all previous days Japan won the most gold medals after all. Goki Maruyama won gold U81kg after he defeated Russian Albert Kostoev, the bronze medallist of the last two European junior Championships.
Before the first minute in the final, the Japanese launched his first acrobatic left-handed uchi-mata, that Kostoev could avoid. The match then continued in a very high rhythm, the Russian trying to score with his right handed sumi-gaeshi, event if just before the last 30 seconds, both fighters were penalised with a shido. The end of the fight was approaching, when Goki Maruyama tried a very last spectacular uchi-mata and scored the so awaited ippon synonym of the ninth victory for Japan.
One of the favourites and Hungarian hope for a medal today was Krisztian Toth. In the semi-final he was opposed to the 19 year-old Kostoev who won.
16-Year old Beka Gviniashvili won the bronze medal against Toth. Gviniashvili is also a big talent who already won the Cadet European title, the EYOF title and World Cadet title in Kiev, what a year!

Japan is leading by 9 gold medals followed by Russia with two gold medals and four silver. Austria can be proud on gold and bronze being the second ranked nation in Europe.

Follow the last day of the World Juniors and review all results and pics here: