Russia and France show their potential at last day in Talllinn 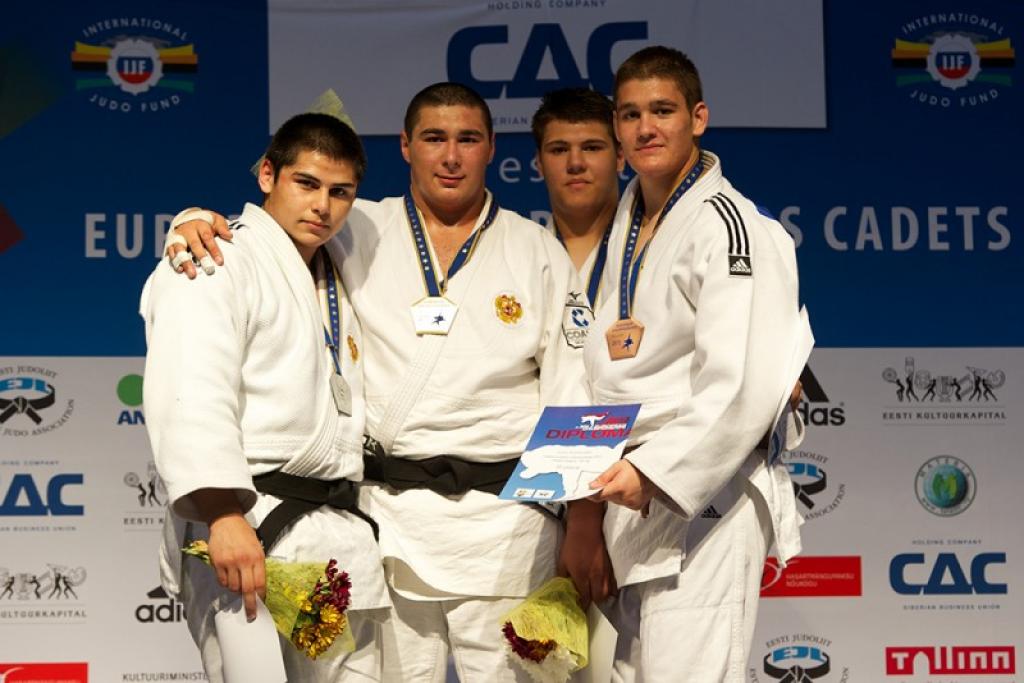 What a great day of fighting at the last day of the European Championships for cadets in Tallinn. A large number of super ippons were showcased by the youth under 18 years. An absolute joy to see so many good fights where me might think that the heavier categories are more boring, not at all!

The final in the category U81kg was between Mikhail Igolnikov of Russia and Dutch Frank de Wit. The Russia is undefeatable today and for the last three years at the European Championships for Cadets. Also in the final against De Wit he gave the Dutch a warning with his skills resulting in yuko and showed good groundwork in the first minute. Some moments later he threw De wit for ippon.

Igolnikov is the first ever to win three consecutive European titles and he is just 16 years young.

Mikhail Igolnikov amended: “It was very good today. The secret behind my success is the great work of our coaches. I want to thank them, the whole team and the doctors. (On which of his three victories at the European Cadet Championships is the most important to him) I can’t even tell. It is like if you ask a mother which of her three children is her favorite. You cannot choose. They all mean a lot to me.”

Frank de Wit had a great day and defeated four opponents and two strong Austrian among them. “I am happy with silver but I lost the final. I did not feel any pressure going into the final, but I still wanted to win.”

In the first bronze medal U81kg Estonia cheered for its first European medal of the tournament. Mattias Kuusik defeated number three seeded Marko Bubanja of Austria. Kuusik was very happy: “It is a super result for me and it is a surprise. I still can’t believe it. (On being a blue belt) The belt is not important. I have been practicing judo for ten years and I’m training a lot but I don’t have time to pass the exams. My next event it the European Olympic Youth Festival and my medal from here is a big motivation for me.”

The second bronze medal was the first medal for Austria by Max Schneider. He threw Dominik Druzeta for ippon in his last fight.

In the women’s final U70kg French Marie-Eve Gahie was heayvily supported by her teammates in her match against tough Aleksandra Samardzic of Bosnia Herzegovina. Gahie made the difference with a waza-ari and received the applause for the second gold medal for her team this event, both for the women. She cheered herself for her teammate and now she received the awarding of her friends on the stands. Compliments for the French support in general.

Gahie: “This final was not easy but the great support of our French team helped me. I want to thank everybody on the team. I am extremely happy now. My hardest match of the day definitely was the quarterfinal against Brigita Matic (CRO), it was much harder than the final.”

Samardzic who was the number eihgt of the European CadetRanking list surprised today and showed good judo. She was the first woman of her nation to win a medal at European Cadet Championships ever. “I am very pleased to have won this medal for Bosnia. It is a very good result for me as I am new to this category. I feel comfortable in this category and will continue in it.”

The bronze medal was for Ekatarina Tokareva of Russia who overcame Sara Tintor in ne-waza by an armlock.

Big favourite Brigita Matic was defeated in the quarter final against the French European Champion, bt she came back with two victories in the repechage and for bronze against Alina Langweiler. The colour of the medal could not inspire her for a celebration, today’s clear winner was Marie-Eve Gahie who danced her gold joy away after her match full of victory adrenaline.

The final U90kg was won by Russia. Another Russian magician, Karen Palian who was the European Ranking leader in advance. In the final Rokas Nenartavicius was his opponent, the number three of the ranking, and the winner of the first European Cup this season in Zagreb. Palian won the cups in Antalya (TUR) and Bielsko Biala (POL) and showed he was the best today when he threw the Lithunian for ippon after almost three minutes in the match. Palian prolonged his title of last year in Montenegro. Palian said: “Winning last year was harder, because there were many more competitors. The competition was much tougher. Although I injured my rib in the first fight, it still was easier to win this time. It was hard to push through with the injury, but I did it. I will be fine. Now I hope to do well at the European Olympic Youth Festival and at the Cadet World Championships.

Nenartavicius (LTU): “Karen (Palian) certainly was the favorite. I feel happy with silver, but I am bit sad that I lost in the final. But it was a great fight.”

Ukrainian Zelim Kotsoev took the bronze medal after his victory against in a tough match against British John Jayne. Kotsoev was the youngest medal winner of the last day aged 14. Over 64 Ukrainian medals in European Cadet History this was just the second won in this category U90kg. The second bronze medal was decided by ippon for Daviti Ramazashvili from Georgia against Adam Rudzinszky of Hungary.

In this category the top fighters of the European Ranking found their way to the final stage for the medals.

An exciting match between Polish title defender Kamila Pasternak of Poland and French Morgane Duchene. They know eachother well and Duchene won the European Cup in Bielsko Biala in May where Pasternak finished third. In this field of just 14 participants anything was possible today with great ippons during the day. Also in the first three minutes both fighters didn’t give anything away but Pasternak received the first shido by the referee which delivered Duchene the victory half a minute later.  After three participations she finally came to the final stage and even took the gold, the third for the French women this event. Probably good for a big party in the French equipe.

Duchene reacted: “I competed in my third European Championships (Cadets), in different categories, and it is my first medal. It is great that it is gold. Last year Marie (Gahie, FRA) and I competed in the same category, the -70kg, and we were rivals. This year we are rooming together and we said to each other that we both have to take the gold.”

Silver medallist Pasternak said: “I have an injury to my leg and my arm. I injured my leg last year at the European Cadets Championships in Bar, so I am happy to have finished second today. The French girl was very strong. Maybe next year I can beat her. I will continue in the cadets.”

The bronze medals went to Italy and Turkey. The whole team of Turkey gave everything in their souls to support Sebile Akbulut to the bronze against Kristina Usova, but the Russian struck back 23 seconds before the end with a devastating ippon. Eleonora Geri defeated Dutch Ilona Lucassen for bronze, the Italian was responsible for the only female Italian medal. Last year the women scored three medals and gold for Alessandra Prosdocimo.

France was the clear winner of the medal table among women with three gold medals and one silver. Russia, Georgia, Romania, Hungary and Azerbaijan won the other five gold medals.

The men’s heavyweight final O90 was interesting between two Russian fighters. Two strong men with Ruslan Shakhbazov and Tamerlan Bazaev. Both men had a great and correct kumi-kata but played a static match which seemed to be decided in shidos. The first was for Shakhbazov. He hit back after three minutes when he scored waza-ari. Now was the initiative for Bashaev who impressed most today, but could not deal with the superb tactics of Shakhbazov who timed his attacks and match better. Shakhbazov defeated all medal winners today and booked a controlled victory.

Ruslan Shakhbazov (RUS), gold +90kg: “The final was a bit hard today, especially because I fought my teammate. I want to thank everybody, including Tamerlan (Bashaev) (On winning this time after finishing second last year) I don’t even know what helped me to win today. It just happened that way.”

Tamerlan Bashaev (RUS), silver +90kg: “It is mentally much harder to fight your teammate. I have been training with him in training camps, we prepared together. He is my friend and when you go out for the match it is hard to see him as your opponent. I competed in my first Cadets European Championships and overall I felt I performed okay.”

Romania struck in the last moment with two bronze medals in the heavyweight category.  In the bronze medal match Mircea Croitoru of Romania defeated Messie Katanga of France. Katanga though deserves the special award for best supporter during the event. Croitoru, the number three of the ranking list had one yuko on the scoreboard.

Another Romanian also won the fourth medal for his nation; Luca Kunszabo, he defeated his opponent Jur Spijkers of the Netherlands.

In total 23 medal winning nations, exactly the same as last year’s record. On the last day Russia and France claimed their status as the traditionally strong judo nations. Russian was the final winner with five gold medals, four for men and one for women. France won the women’s tally with three gold medals. Historic first gold medals for Kosovo represented by the IJF and the first ever winner for a Georgian woman Mariam Janashvili, a story on its own.

Watch all photos of the event here