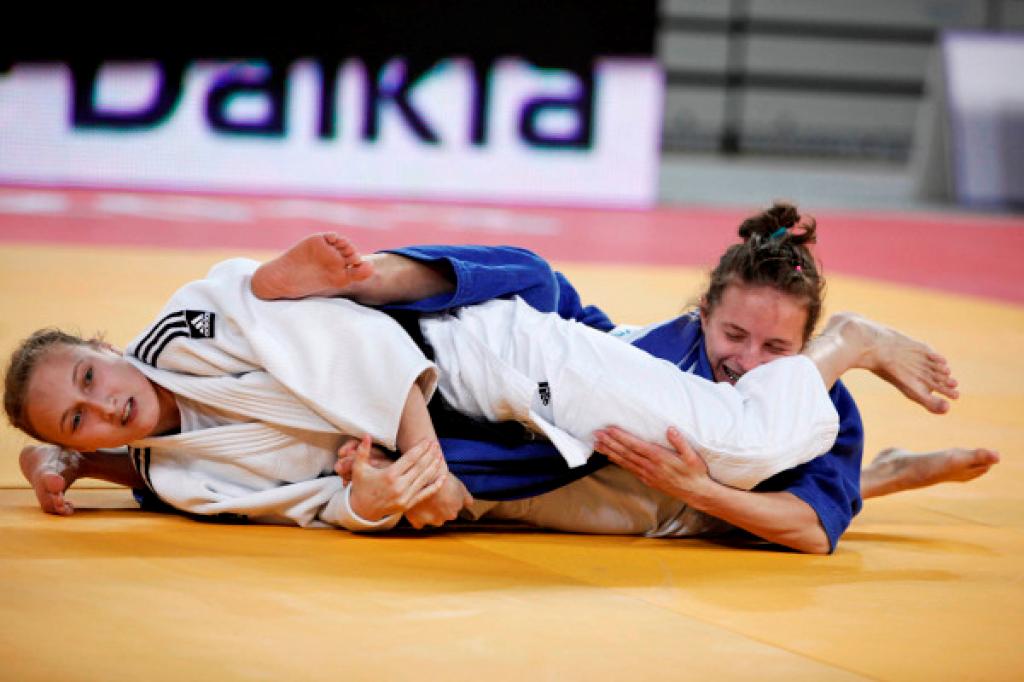 Russia topped the tally with two titles, both for the women. France won gold by Vincent Manquest. Both Russian victories were impressive. For a long time Andreea Stefanescu of Romania gave the impression she would win the world title U44kg, but latterly a few seconds before the end it was her opponent Anastasia Pavlenko who hot back in the dying second with an excellent ippon. Stefanescu gave the world title away and Pavlenko peaked at the highlight of the year by snatching the gold. At the European Championships in Sarajevo Stefanescu won bronze, Borislava Damyanova (BUL) the gold who finished fifth today. Pavlenko defeated four opponents in Ljubljana, in the semi final Honoka Yamauchi who floored Damyanova earlier today. Stefanescu upset Julijana Savic, the number two of the Europeans in her first bout. Dolgova is actually the successor of Irina Dolgova in this category. The amazing judoka from Russia won the world title more expected U48kg. However the way of winning was fantastic. The final was decided in twenty seconds when Alexandra Pop had to tap for an armlock, quickly and efficiently executed by Dolgova. The 18-year young phenomenon recently won her second Junior European title and added the world title without blinking. She blasted everyone away with her superb ground technique. She won her five fight and defeated Gabriela Chibana in the semi final, a well know opponent who already has senior experiences. Dolgova though is brought slowly in the seniors although her own speed is unmeasured. In Sarajevo in September Dolgova beat compatriot Anna Dmitrieva who was today beaten by Pop, the number five of the Europeans. Dmitrieva now cheered twice for her teammates. Amandine Buchard took the bronze medal for France. She also has a wealth of experience at high level and even made her debut at senior level at the Grand Slam of Paris this year. However at this top level a bronze medal isn’t so bad for Buchard. Not so much later France cheered for the gold medal of Vincent Manquest who defeated Venezolan surprise Armando Maita in the final U55kg. Manquest lost the European final against Davud Mammadov and didn’t want to experience a silver again. The European Champion finished seventh today, Manquest defeated all his five opponents, all very strong. Battulga Ganbaatar (MGL), strong Armenia Garik Harutyuyan, the hard fighter Mehman Sadigov who had paid his dues at the Europeans, but again couldn’t impress against Manquest. And in the semi final Ryuju Nagayama (JPN), the world U17 Champion of 2011. Manquest was crowned as the 16th French World Junior Champion. David Larose was the only lightweight U60kg, Manquest is even lighter and seeking for the senior success of his examples Larose, Legrand, Pietri and double World Junior Champion Teddy Riner. Leri Chelidze (GEO) showed he is still among the top players of Europe in this category, now taking a bronze medal. He defeated Ryuju Nagayama for bronze. Asia won gold U60kg by An Baul, who didn’t want to repeat his silver of two years ago in Cape Town. Now 19 years young he did take the world title although his Uzbek opponent Diyorbek Urozboev gave him a hard time in the final with a great grip, but his attacks weren’t as efficient as the Korean. An steps into the footlight of Kim Yae-Jup who was a fantastic lightweight World Junior Champion in 1983. He won the world title in 1987 and Olympic title in 1988. Such career is teasing Baul to work a few years more and perhaps we will be seeing him back in Rio in 2016. Another greatness, Choi Min-Ho was also world and Olympic Champion U60kg but never world junior champion. Europe is proud for the bronze medal of Ahmet Sahin Kaba of Turkey who again won a medal at world junior level. Kaba won silver in Sarajevo’s Europeans in this competitive category. He reached the final by beating former European Champion Adrien Quertinmont but lost to Urozboev in the semi final. Europe is clearly leading the medal table with the three world titles, the two silver medals by Romania that again shows how talented it is in the lighter categories. On Thursday more action from Ljubljana. Watch all photos in our media gallery.