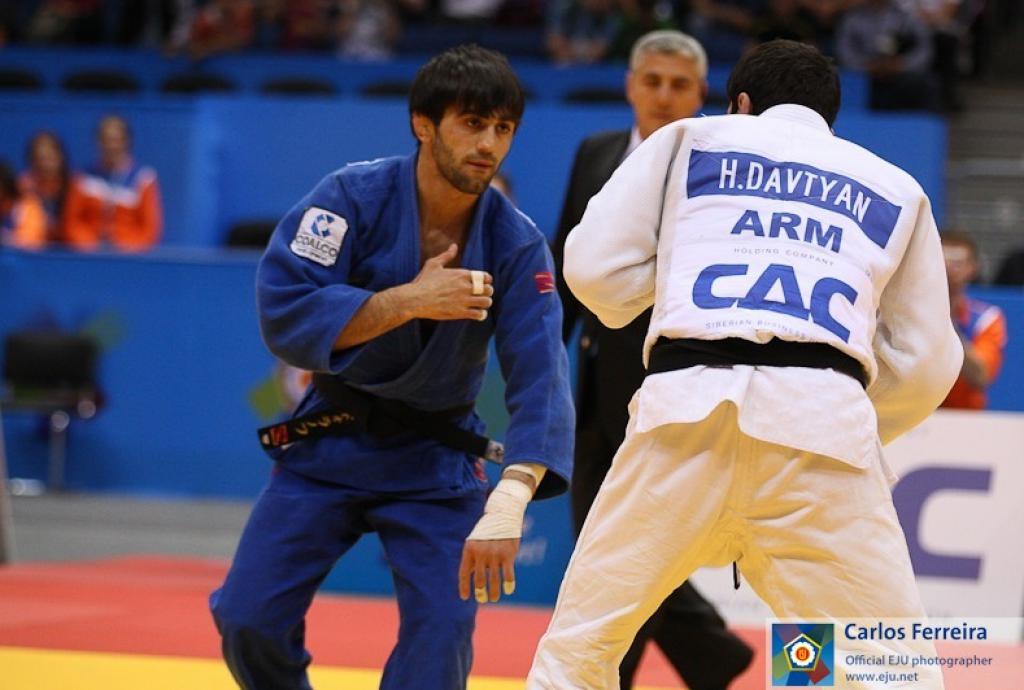 Russia celebrated the first European title U60kg since 2009 when Arsen Galstyan won in Tbilisi. On the first day of the European Championships Beslan Mudranov was able to beat Hovhannes Davtyan of Armenia in the final after he had defeated the strong Amiran Papinashvili in the semi final.

Sad for Davtyan who lost his second chance for a European title, In 2007 he won silver in Belgrade losing to Ruslan Kishmakov, the previous Russian winner. Since the revolution in the Soviet Union this category is a mixture of nations who won the lightweight title. France, Georgia, Azerbaijan and now Russia all won at least three titles. Mudranov takes over the gold medal of Georgiy Zantaraia (UKR) who wasn’t good enough to stand Davtyan in the semi final and Jeroen Mooren (NED) in the bronze medal bout. Mooren won by hantei staying cool against the active but not efficient Zantaraia who suffered conditional problems in the golden score.
Amiran Papinashvili had a good day but couldn’t stand Mudranov in the semi final. In the bronze medal fight he was able to defeat Ludwig Paischer the 2004 and 2008 European Champion of Austria.
Mudranov was very happy with his victory: “This is my first ever medal at the European Championships and I am very happy to have come first today. I prepared seriously for this event. I took it fight after fight today. I didn’t think of the gold medal straight away, but I prepared mentally for each match” the winner said.

Davtyan was not so sad afterall: „I am disappointed. I wanted to win. But it is my first medal in five years.“
Bronze medalist Jeroen Mooren needed a success after a period full of injuries: “ I am very tired right now. At the beginning, I didn’t do so well and I needed to go into the golden score match twice earlier on. Then I improved. Now in the bronze medal match we went into golden score again and finally I won by referees’ decision. Now I am very happy.“