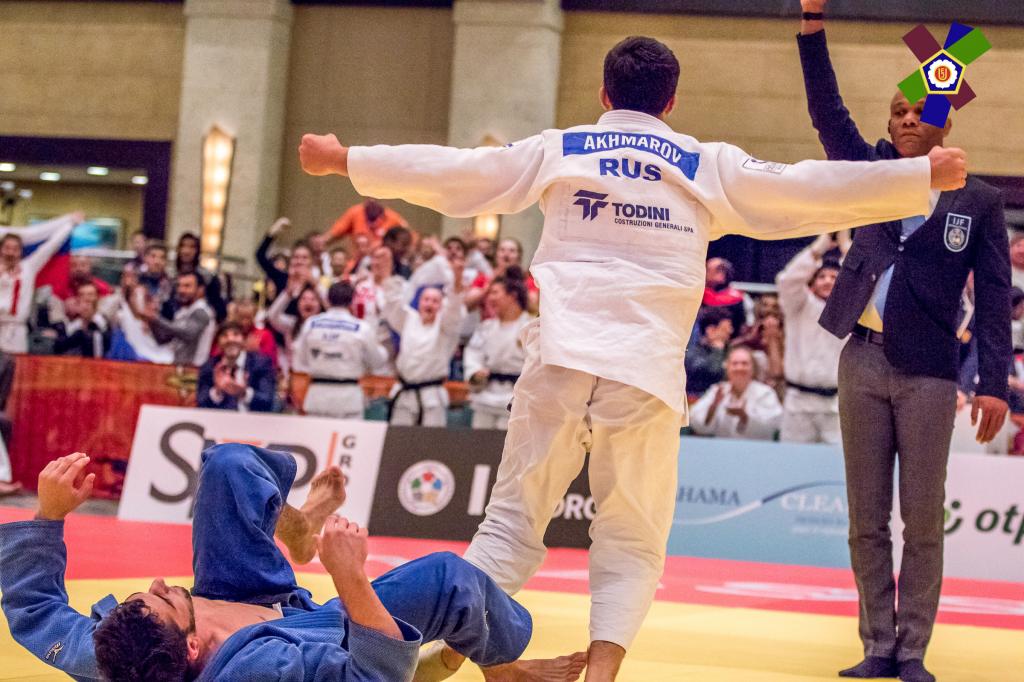 The Russian team began the day by a defeat from Brazil. The match finished with a 4:4 outcome at first. According to the rules, this resulted a draw of one weigh division that had to re-contest. It was athletes of the -48kg category that had to meet again. Namely, Diana TUNIAN (RUS) and Laura FERREIRA (BRA). The latter took glory and led Brazil into the semi-finals. Strangely, the current junior European Champion of the -48kg category, Ekaterina DOLGIKH  (RUS) was not selected for this match up against Brazil. We asked women’s Junior coach, Batraz Kaitmazov for the reason:

“Yes, she is [Ekaterina DOLGIKH] the better of the two, however, she struggles against the Brazilian judoka with the grip, which we knew before, so we put a younger one in, Diana TUNIAN, instead. We tried our luck.”

This resulted Russia to settle for reprechage against Germany. The match up rolled head to head until the last contest of the bout, when Russia’s David BABAYAN overcome Erik ABRAMOV to pull the team through for the Bronze medal chance. Georgia was waiting on the other end with only seven athletes as Mariam TCHANTURIA was unable to compete due to an injury. The RUS vs GEO match was once again a really tight battle and the pressure left for the last athletes in the +70kg category. Specifically, Veronika ARTAMONOVA of Russia and Sophio SOMKHISHVILI of Georgia. Towards the last minute of the contest Artamonova used her te-waza skills to roll the Georgian into an osei-komi-waza and collect a crucial win for Russia to declare the bronze medal. Women’s Team coach, , Batraz Kaitmazov said,

“The plan was clear to bring Artamonova against Somkhishvili as we knew that the style of judo from our athlete wont suit the Georgian judoka.”

Russian junior men’s coach, Kamil MAGOMEDOV added; “We expected more medals in the individuals and this team bronze medal is certainly not a compensation for that. The team is always completely different to the individual event and this is when we give chance to the younger judoka to represent themselves and Russia at a World Championships. I am pleased with the performance of the team today. I was really looking forward to the bronze medal contest against Georgia as they are a great team and a Russia vs Georgian match up always includes talented judoka and exciting contests, at any level.”