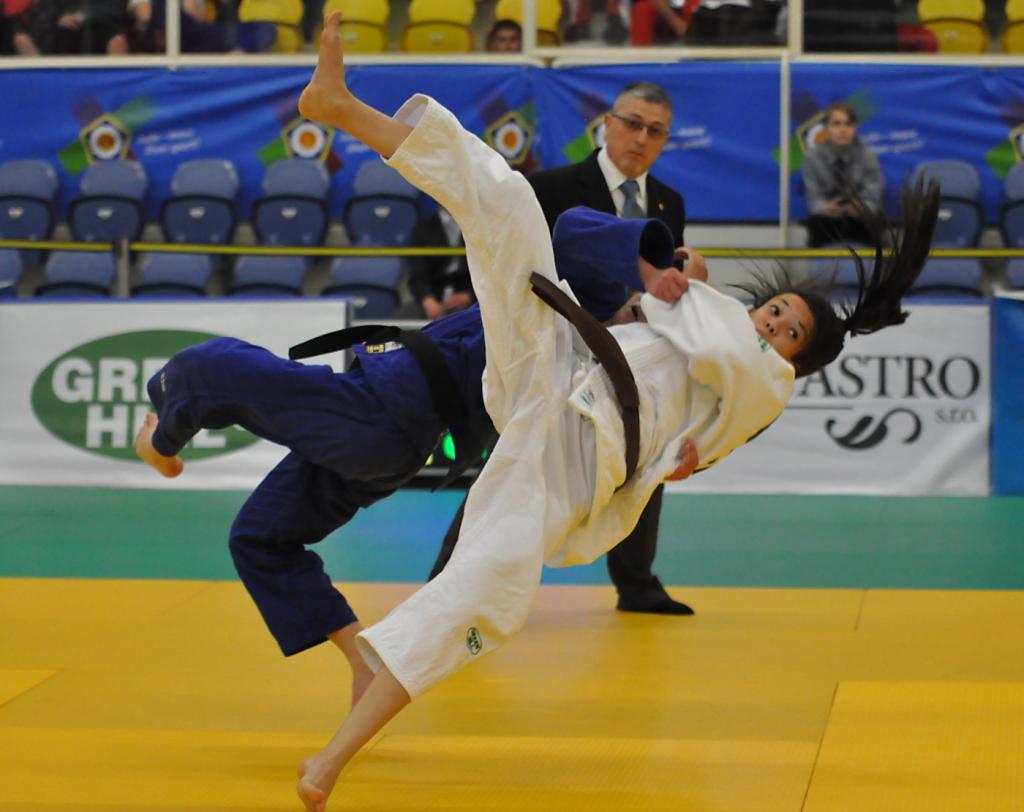 The first day of the European Cup Cadets in Teplice was dominated by the Russian team. The young Russian athletes took 3 gold 3 silver and 2 bronze medals.
“I am very much satisfied so far”, Mr. Gladchenko, the Russian head coach said, “and hope we will win some more medals tomorrow. This is our last tournament before the European Championships. I am glad that both in Berlin and Teplice our young athletes performed well and hope that we will continue winning medals in Athens.”
However the first gold of the day won Nauatbek of Kazakhstan in -40 kg category in which the round-robin system was used.
The first final in the final block was the repetition of Tver and Berlin – 50kg finals. Konstantin defeated Zabolotnyi for the third time in a row by throwing him for ippon with a beautiful seoi-nage in the very last second of the fight. “It is quite difficult to fight Zbolotnyi”, Konstantin said. “He knows my style and my techniques and it is almost impossible to surprise him with anything new. This final was the most difficult fight against him although I won it by ippon. I have not lost any fight abroad this year and hope to win a medal also in Athens”.
The -44 kg final was also decided before the time limit. Florini of Italy threw Shmal of Ukraine with a spectacular harai-goshi some 30 seconds before the end of the fight.
Two twin brothers met in -55 kg final. Kazbek Achmizov countered his brother Azamat for ippon and won the second gold for Russia. He has very likely secured his place in the Russian team for Athens.
Slovenian girls won 2 gold medals in Teplice. Both Stangar in -48 kg and Leski in -52 kg won their final fights before the time limit. “We have shown today that we work hard in Slovenia”, Leski said. “We hope that we will prove our qualities also in Athens”, Stangar added.
The Russian dominance was broken only in -60 kg where Ciloglu of Turkey threw Papikian of Russia for ippon with seoi-nage.
However the last gold of the day in – 66 kg went again to Russia. Bulatov defeated Papa of Switzerland in probably the most beautiful match of the day. Despite being 2 shido down Bulatov continued attacking and eventually threw Papa for waza-ari with a nice uchi-mata before finishing the fight with an uki-waza. “I knew I could throw him with uchi-mata because I am taller than him”, Bulatov said. “But in the first three minutes he did not give me any chance. After the throw I started to think how to maintain the lead but then I threw him again for ippon with uki-waza. I am happy that I pleased my grandfather who travelled with me here to Teplice. This is my first European Cup gold and it is one of the happiest day of my life”, Bulatov said.
The tournament continues tomorrow at 10:00.