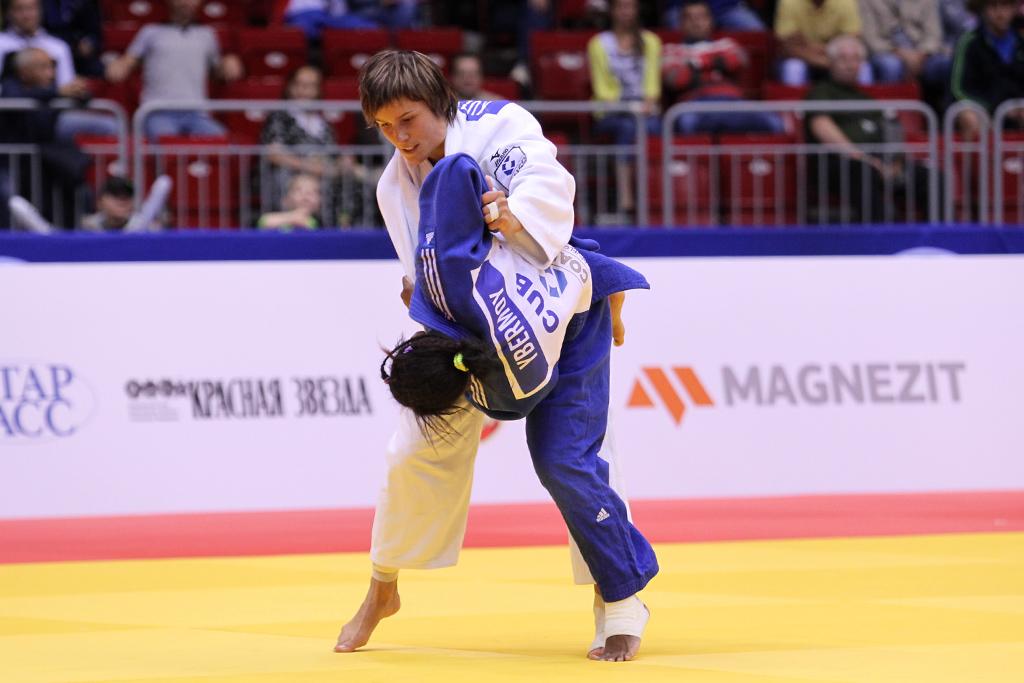 More often than not team events provide incredible entertainment and today’s World Team Championships in Chelyabinsk provided more than its fair share. In addition to the usual questions of who would face whom and who would defeat whom, there was also the matter of whether President Vladimir Putin would make an appearance. This last question was answered when, part way through the women’s bronze medal match between Poland and Germany, Mr. Putin to thunderous applause entered the arena. The German women’s team went on to defeat the Polish team for a bronze medal whilst Mr. Putin settled down to enjoy his favourite sport and wait for the men’s team final between Russia and Japan. Earlier in the day in the women’s team event the audience at the Traktor Arena had seen the Japanese (reigning world champions) lose out to France in the first semi-final and (in the second semi final) Mongolia defeat Poland. The French triumphed in the gold medal match by a score of 3-2 with wins for Priscilla Gneto, Clarisse Agbegnenou and Audrey Tcheumeo making it a third world team title win for the French women, the Japanese having to settle for bronze after defeating Russia. It was slightly ironic that the men’s final should also be contested between Japan and hosts Russia. Kamal Khan Magomedov began strongly by throwing current world champion Ebinuma Masashi for ippon. The Russian team then claimed a massive boost when Denis Iartcev defeated Ono Shohei. The crowd were in fever pitch and even Mr. Putin was joining in the celebratory handshakes. From being 0-2 down the Japanese team then clawed their way back first with Nagase Takanori defeating Murat Khabachirov, then the 19 year old Baker Mashu winning over Magomed Magomedov leaving the match finely balanced at 2-2 for the last and deciding contest. Despite a screaming home crowd it was Shichinoe Ryu of Japan who had the force with him and he held Aslan Kambiev with tate shiogatame for ippon to give Japan the gold medal. There were bronze medals for defending champions Georgia and Germany.

For the details of the results from day seven click on: http://www.ippon.org/wc_teams2014.php
Watch all the photos in our photo gallery: http://www.eju.net/media/?galleryId=109&mode=showEvent&id=1833