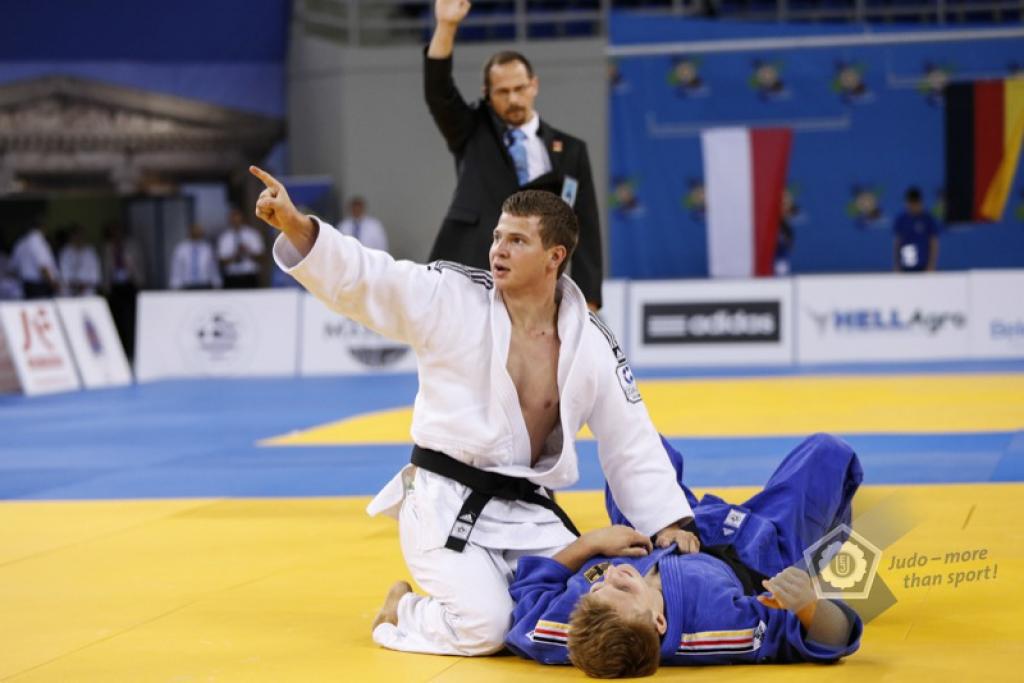 Heydarov (AZE) strikes gold again
Top favorite and -60kg European Cadet Champion Hidayat Heydarov (AZE) struck gold again, this time in the -66kg. The Azeri faced Ismail Chasygov (RUS) in the final. They had met twice before, with each one winning one match. The final was pretty even with nobody scoring at the beginning, but then Heydarov first scored a yuko and then demonstrated his newaza skills, holding Chasygov. The Russian tapped out.
“After winning the -60kg last year I decided I want to win the -66kg this year”, Heydarat commented. “I was nervous in my first fight. I knew the Portuguese (David Reis). Then it went well. My next goal is to compete in the European Games 2015 in Baku.” Coach Tarlan Hasanov added: “I am 72 years old and I coach him since he is six years old. I came especially for him to Athens. He made me very proud by winning this year and now again.”
Chasygov was not completely satisfied with his performance. “I think I showed 50 percent. I could have won, but I made a mistake. I prepared well and collected experience in other competitions, but he (Heydarov) is not an easy opponent. He fought like a man. I hope to take my revenge next time.
Second place is still good, as this is my first time to compete at the European Championships.”

With 40 players, the -66kg had the most competitors in any of the categories.

Kolsenik (RUS) dominates -73kg
Top seed Alexander Kolesnik (RUS) was not to be beaten and demonstrated his strength also in the -73kg final against Tim Gramkow (GER). Both players showed some good actions, but nobody scored. Then Gramkow marked a yuko with 1.58 minutes to go. Unfazed, Kolesnik reacted and threw the German for waza-ari just seconds later. Just ten seconds after that, Kolesnik achieved Ippon with another throw.
“I am very happy and proud for my country”, Kolesnik said. “The last match was the hardest, because it was the final and I was very nervous. I competed in my first European Championship after all. But Judo is my thing and I do it quite well”, he explained. Kolesnik named Russian Olympic Champions Arsen Galstyan and Tagir Khabulaev as his idols. “Winning here gave me a lot of experience and it bodes well for the future. One day, I also want to become Olympic Champion”, the Russian concluded.
Gramkow was satisfied to come off with the silver medal. “I was fifth last year and the year before, so I am very pleased to finally have a medal. Up to the final the day was ideal. I think overall I had fought five minutes, I ended all matches ahead of time. But Kolesnik in the final made it really hard for me and he deserved to win today”, the German commented.

34 athletes competed in this category.

Leski (SLO) golden in -52kg
Andreja Leski (SLO) took gold in the -52kg after winning silver in 2013 at the European Cadet Championship in the -48kg. In the final, the Slovenian overcame a challenge by Betina Temelkova (BUL), a bronze medalist at the World Cadet Championships 2013 in the -48kg.
At the beginning, Leski and Temelkova were evenly matched. Leski then scored a yuko 50 seconds before the end and was able to hold on to this lead to win the title.

“To be honest, I came here for the gold. So I met my expectations. I wasn’t sure, though, if the -52kg will be for me, but then the year went well for me. This was my last competition in the cadets, I will move up to juniors now. Last year I had a knee injury, this year everything was fine. Winning was very important to me, but next year I’ll start from scratch”, Leski shared.

Gercken (GER), Dabrowska (POL) in -57kg
Thea Gercken (GER) continued her streak from the preliminaries and defeated Anna Dabrowska (POL) in the -57kg final to win the first gold medal for Germany at these European Cadet Championships.
Gercken was quick to score a yuko within 35 seconds into the match and then followed up with a throw to achieve Ippon. The match ended after 57 seconds.

“I can’t believe it, I am overwhelmed”, Gercken commented. “The first fight was the most difficult for me, because it decides in what shape you are and how far you can go. You always have to believe in your dreams”, the German noted. She now wants to heal injuries and move up to the junior level.

“I feel amazing”, Dobrowska said. “Last year in Tallinn I lost my second fight, but I have been working really hard and I have fantastic coaches that helped me to improve.” Dombrowska was also excited about her teammate Julia Kowalczyk (POL) taking bronze, defeating second-seeded Mariia Gryzlova (RUS). “She (Kowalczyk) is my friend and I am very happy for her”.

28 judoka competed in this category.

Reimann (GER) claims fastest gold of the day
Top seed Lara Reimann (GER) did not waste any time on her way to victory in the -63kg final against
Michaela Polleres (AUT). The German attacked right away, taking down Polleres to score waza-ari after five seconds. The opponent hardly had time to get up, when Reimann threw her again, earning a second waza-ari, winning the title after just 25 seconds. The result reflected the confidence Reimann had shown all day. “I felt a little pressure coming in as the top seed, but my coaches kept telling me that the season has been going really well and that I just need to trust in what I can do”, the German judoka explained. “I felt fit today. My goal was to win each fight right away, to throw right away. This is what we trained.” Reimann now will move up to the next age category. “This victory motivates me a lot. Last year it didn’t go well at the European Olympic Youth Festival, but when you continue to train you can come back”, she added.

Polleres was excited about her day and the silver medal. “It is incredible. I am pleased with my performance. I could have fought longer in the final, but she (Reimann) surprised me. She knocked me down right away. Now I’m headed for the Youth Olympic Games and I want to give my best there as well. Before I didn’t think I would come so far, but now I saw that I can go far and this is a big motivation for me”, the Austrian said.