RUSSIA ON TOP AT EUROPEAN CADET CHAMPIONSHIPS 2014 IN ATHENS 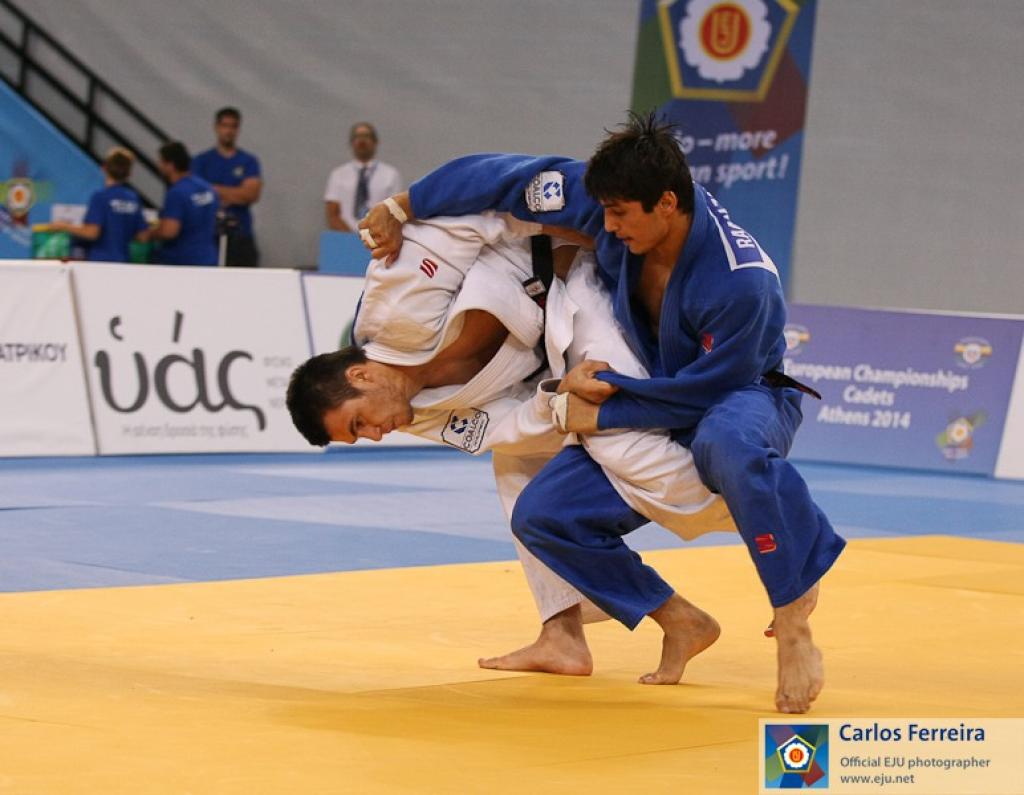 Russia, Germany, Ukraine and the Netherlands collected the last five gold medals as the European Cadet Championships in Athens, Greece, wrapped up Sunday in the Olympic Center of Ano Liossia with the men’s -81kg, -90kg and +90 kg as well as with the women’s -70kg and +70 kg.
Russia was the most successful nation with four gold, five silver and two bronze medals overall. Germany overtook France in the medal standings with a total of three gold, one silver and four bronze medals. France ranked third with two gold, one silver and three bronze medals. Overall 20 countries took medals at the Championships.

Tepkaev takes gold in Russian final in -81kg
The final of the -81kg was a Russian affair with top seeded Turpal Tepkaev defeating his teammate Zaur Ramzanov for the gold. The two Russians were evenly matched, but Tepkaev received two shidos and Ramzanov had one. With 22 seconds to go, Tepkaev threw Ramzanov for waza-ari and defended this lead to the end.
“All opponents are difficult, but a Russian opponent is the most difficult”, Tepkaev commented. “We’ve met six times before, with me winning four times. So I was confident I would win this time. Now I will move up to the junior level”, the newly minted European Cadet Champion added.

“Obviously I wanted the gold medal. I was a little unlucky, I didn’t construct the fight the right way and I made a mistake at the end”, Ramzanov admitted. “We know each other very well and we’ve been competing against each other the whole year and that makes it difficult to fight each other. My next goal is to compete in the under 21 and to improve”, the 2013 World Cadet Champion (-73kg) concluded.

Kotsoev takes gold for Ukraine in -90kg
Under the eyes of his compatriot and Athens 2004 Olympic silver medalist Roman Gontyuk, Zelim Kotsoev (UKR) struck gold in the -90kg. Giorgi Gvelesiani (GEO) settled for the silver medal.
Kotsoev took the lead with a throw that earned him a waza-ari 47 seconds into the match. Both players showed some action then, but there was no score until Gvelesiani marked a yuko with a little over a minute to go. The match was intense and both judoka visibly tired, but then Kotsoev was able to perform another throw to achieve Ippon just a few seconds before the end.

“I prepared a lot for this event and I really wanted to win here. Everything worked out for me”, Kotsoev said. “The final was the hardest fight today. I didn’t expect that I would be so tired, I never was that tired. But I was able to pull myself together, I told myself that I have to win and I threw him.” Kotsoev plans to continue to compete in the cadets. “Zelim Kotsoev is our biggest hope in Ukrainian judo”, coach Kazbek Tsagaraev pointed out. “He is from northern Caucasus, from Vladikavkaz. He will step by step join the junior team. Now we will prepare for the World Junior Championship that will take place in the USA”, the coach added.
“To be the champion would have been better obviously, but second place is also not bad. It was my third time at this event and last year I was fifth”, Gvelesiani noted. “It would have been nice to win the gold here in Athens, where Zurab Zviadauri of Georgia won the gold in the -90kg”, he added.

Aaron Fara (AUT) beat Martti Puumalainen (FIN) to take the bronze medal. “I am very satisfied. During my preparation I was injured, I got stung by a bee and I am allergic to that, but everything went well here. To win a medal is a dream come true”, the Austrian shared.
Daviti Ramazashvili (GEO) secured his third consecutive medal at the European Cadet Championships after silver in 2012 and bronze in 2013 when he beat Musa Shakarmaliyev (AZE) in the other bronze medal match.

26 judoka competed in this category.

Spijkers (NED) grabs gold in +90 kg
In the heavyweight, Jur Spijkers (NED) came from behind to take the only gold medal for the Netherlands at these European Championships over top seed Vakhid Daurbekov (RUS).
Daurbekov was in the lead with a waza-ari, but he also had three shidos. With just 27 seconds remaining, Spijkers threw the Russian for waza-ari and then followed up with a second waza-ari to win the title.
“He had a waza-ari, but I came back and got two waza-ari”, the Dutchman summed up. “I had two bad tournaments before coming here, so my ranking was low, but I knew that I can be European Champion. The first match today was very difficult for me, because I had lost to him (Bartlomiej Zawadzki, POL) in Poland, but I was very motivated to beat him this time. The final was hard, too.” Another motivation for Spijkers came from the Dutch football team that qualified for the semifinal at the World Cup, although he couldn’t watch the match as it was too late in the evening on Saturday. “I am European Champion and they will become World Champions”, Spijkers said, laughing.
Daurbekov was visibly distraught after his loss.

Second seeded Alessandro Graziano (ITA) came back from his loss to Spijkers in the quarterfinal and
earned the bronze over Ahmet Yildirim (TUR). Stephan Heygi (AUT), who had lost to Spijkers in the semifinal, took home the other bronze medal. He defeated Romas Petkus (LTU).

Another contender, Kemal Kaitov (RUS), ranked fourth in the world in this category, was out after losing his first contest.

Scoccimarro (GER) shines in -70kg
Number one seed Giovanna Scoccimarro (GER) shone again in the final to win the title against Ekaterina Tokareva (RUS). The German approached the match with confidence and used the first opportunity to throw her opponent for Ippon after less than two minutes.
“She (Tokareva) had well prepared for me, but I was able to get her and throw her”, Scoccimarro noted. “I put some pressure on myself, because I came here as the top seed, but after the first match this was all gone. I needed the first fight to get into it”, the German added. The semifinal against teammate Sarah Maekelburg was not easy for her, though. “It is a shame when you have to fight a teammate to get into the final, but eventually it worked out for both of us”, she noted, referring to the fact that Maekelburg won the bronze medal against Juliette Tarting (FRA).

“I did not perform well today. It is my third time at this event, I had bronze last year and silver the year before that and this time I really should have won the gold”, Tokareva said. “I competed for the second time against her (Scoccimarro) and she had beaten me before. She has the height advantage over me.” Tokareva now wants to prepare for the under 21 European and World Championships.

Second seeded Semanur Erdogan (TUR) had lost to Samardzic in her first contest.

There were 22 entries in this category.

Bukareeva (RUS) golden in +70 kg
Second-seeded Marina Bukreeva (RUS) celebrated victory in the +70kg over Anita Formela (POL).
Formela collected three shidos in the first two minutes of the final, then Bukreeva received two penalties before she threw her opponent to get a waza-ari. Bukreeva kept Formela down on the mat and the Polish competitor touched out.

“I am very happy, I have worked the past three years towards this victory and finally it happened”, Bukreeva shared. “I came here for the gold, I worked so much for it. The semifinal (against Barbara Cikic, NED) was the toughest contest today, because I had lost to her before. Obviously, you feel a lot of responsibility in the final as well. I never fought her (Formela) before. My coach discussed her with me and we found the right strategy.”
Formela was pleased with her silver medal. “It was my first time at the European Championships and I have been practicing judo for ten years”, she said. Her next plans include a competition in Poland.

Formela’s teammate Kamila Pasternak (POL) added the bronze to her medal collection of the European Cadet Championships and now as a complete set when she beat Raz Rozalya Hershko (ISR).
The other bronze medal went to Mercedesz Szigetvari (HUN), who defeated Cikic.

Top seed Katarina Lucija Vukovic (CRO) lost in the quarterfinal and in the repechage.

16 girls competed in the heavyweight.