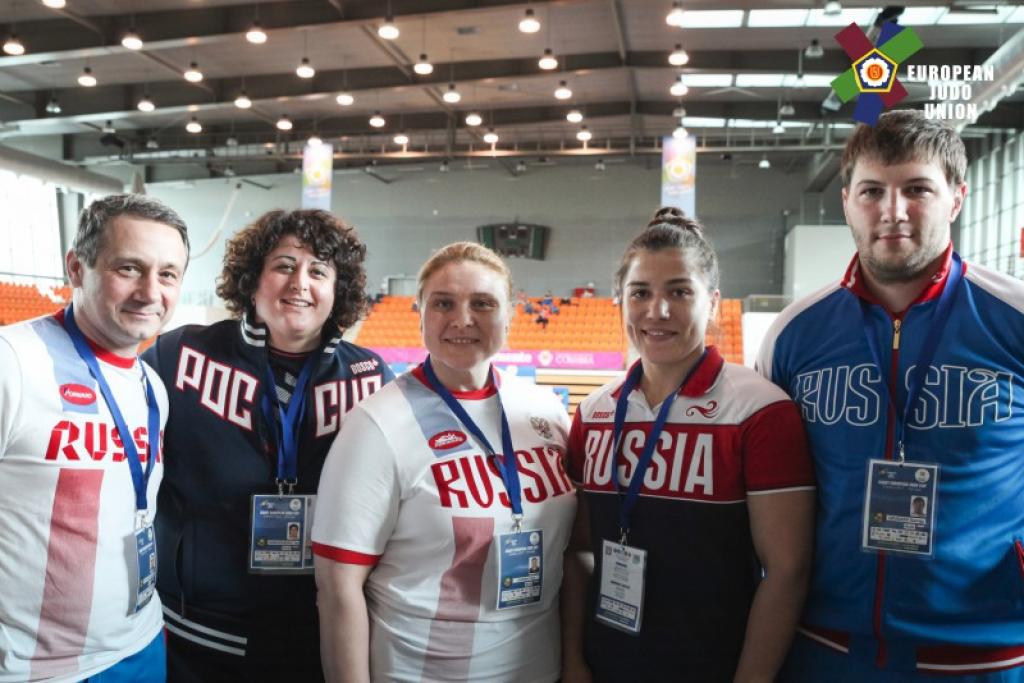 The Russian anthem was played at most of the occasions in Coimbra over the weekend as the team conquered the total number of 6 gold medals, 5 silver and 2 bronzes thus dominating the medal table of the Cadet European Judo Cup, similarly to recent years.

When asked about the level of the tournament, Russian Women coach, Irina Rodina thought “It was very good, not all our athletes won”, and in regards to the overall team performance, Rodina continued; “This team is preparing for the European Youth Olympic Festival in the end of July and European Championships Teams in Kaunas so it is great to have had these results.” Russian Men team coach, Vladimir Gladchenko, also commented on this weekend’s performance; “Nine athletes, and nine of them in the final so it was very good! Our results are great, we made some mistakes but we will try to improve.” Concerning the level of the organization, coach Irina Rodina concluded; “The organization was very good, lovely people, excellent transfers, great sports hall”; so we shall can expect to welcome the Russian squad back again next year.

Portugal finished the day with two silver medals, won by Beatriz Barata in the -57kg and Carolina Paiva in the -70kg category; and a bronze medal achievement was delivered by Mafalda Ezequiel in the -57kg category. The -57kg was disputed between one of the Portuguese athlete [Barata] and Maya Goshen (ISR) who had already won the gold at another edition [Fuengirola] of the Cadet European Judo Cup 2017. The -70kg final match was an Iberian dispute between local hero Carolina Paiva and Begona Sotillo Gomez of Spain. This was one of the most exciting final matches that got all Portuguese judo fans shouting at the top of their lungs as it ended up being a very close contest. The Portuguese team´s performance was very satisfying according to the Portuguese Judo Federation´s High Performance and National Team Director, Luís Monteiro;

“Apart from the excellent organization of the event, the national team deserves a special mention as they achieved 8 medals in total and several finalists. Facing these great results and, in particular, the performance of the female team, we are considering to participate, for the first time ever, in the Cadet European Judo Championships by Teams other than just the individual competition.”

In the heavier categories, there were some interesting fights that deserves to be highlighted. In particular, in the -90kg category, where the favourite was Emils Gerkens (LAT), number 1 in the cadet world ranking list. Gerkens effortlessly reached the final where he faced Valeriy Endovitskiy of Russia. Narrowly, almost at the end of the fight, Endovitskiy managed to make the decisive score. In the +90Kg category, Filip Miljevic (CRO) number 4 on the cadet world ranking, ended up confirming his superiority after winning against worthy opponent Mikhail Makhinia (RUS), by 3 waza ari scores. A three days training camp yet remains to be completed in Coimbra and the next challenege to follow after, will be the 2017 Cadet European Judo Championships which will take place in Kaunas, Lithuania, between the 30th of June to the 2nd of July.