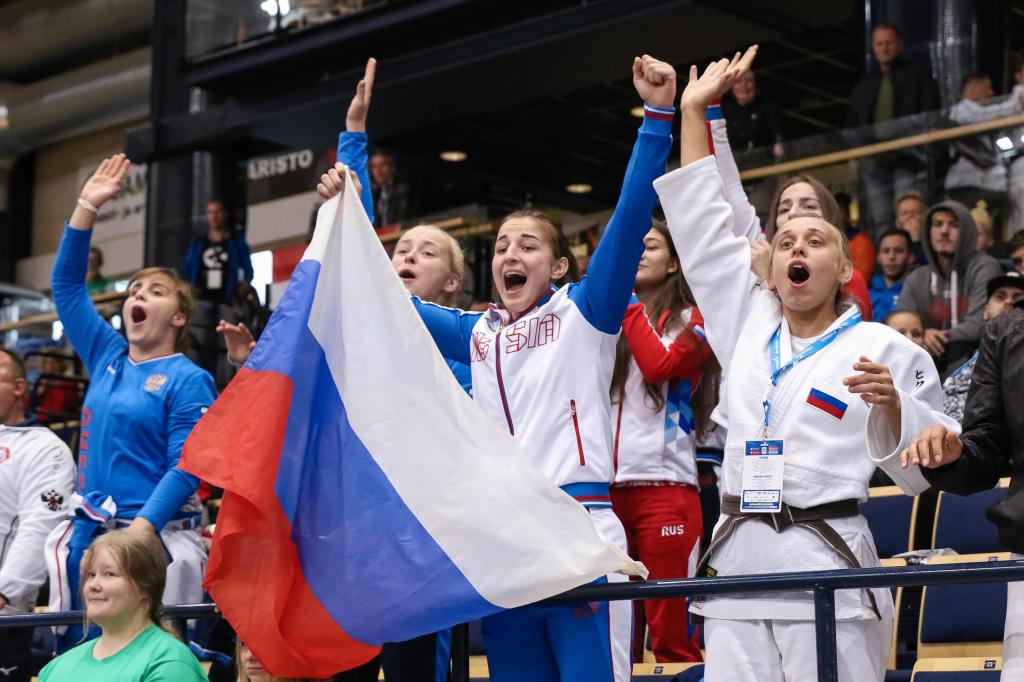 The 2019 Junior European Championships in Vantaa, Finland came to a close today whilst celebrating the results of the Mixed Teams event with reigning Champions, Russia, taking the gold.

While the Russian team hadn’t been as successful as they’d predicted in the individual competition, the team certainly made up for it on day four of the Junior European Championships.

The #1 seeds had a first round bye, only to meet the medal table toppers, Georgia, in the quarter final. Despite the Georgian’s success this week, they didn’t get off to the best start this morning and really struggled against the Russian side and found themselves down 0-3. Georgia fought back hard and managed to even the score but the random draw picked the -73kg category and so Georgii ELBAKIEV of Russia, who had lost his first attempt, came back on to take his revenge and ultimately take his team to the semi final.

Next up for Russia was the German side, yet another difficult round for the top seeds, however, they had some serious making up to do for this week, this was the case especially for the -81kg #1 seed, Mirzo SHUKORIEV. A maki komi from SHUKORIEV was the final nail in the coffin for Germany as they were sent in to the bronze medal contest and Russia took their place in the final.

Italy didn’t start the day expecting to find themselves in the final against Russia but the team spirit and confident judo had brought them to this point and they did not let the win go easily. Despite being 3-0 down, Martina ESPOSITO (ITA) came out to put Italy back in the game,

I was the first point for Italy and I had a lot of belief that we could win the final, it didn’t happen that way, but I am still happy. I felt pressure before my last contest but I was hopeful about it and now we have a fantastic result, a great result for Italy.

This was a great achievement for Italy, but of course, the gold went to Russia and were beyond happy to be taking the first place position on the podium. The deciding contest was the +70kg between Daria VLADIMIROVA (RUS) and Valentina MIELE (ITA). Though Italy had put two wins on the board, MIELE didn’t get the chance to as VLADIMIROVA went straight on the attack and finally claimed the gold medal.

It’s hard to explain how it feels, this feeling is something every athletes should feel in their life and it feels like I won the inidividual gold. I am proud, it is a big honour, not just for me or my team but for our country so it feels amazing but too much to put in to words.

It’s a pity that in the individual event we didn’t take as many titles as we expected but I am really happy with the performance, everyone was ready and showed their best, there are still mistakes to be improved upon for next time but I believe in the future we will take more titles and places on the podium. I am really very happy with the performance during the mixed team, they did a great job and I’m really satisfied with the result so it feels great.

Italy lost out in the final but not before proving themselves during the preliminaries. They beat the #2 seeds, France, in their second round after defeating Azerbaijan, but to get to Russia, Italy had to see out a strong Dutch team first.

It was a to and fro situation between Italy and the Netherlands until Lorenzo AGRO SYLVAIN (ITA) came back in the draw match to secure yet another win for the Italians.

Georgia performed better than ever throughout the week with incredible feats, setting records and ruling the mens weight classes on the final day, but the Champions may have been too exhausted to beat out the #1 seeds after a win against Croatia in the first round.

After losing out to the eventual winners, Georgia came back to defeat Portugal quite convincingly, ceding only one contest to the current and two-time Junior European Champion, Patricia SAMPAIO. The bronze match up was against the Dutch, and this time, Georgia refused to give up a single contest, the line up of Saba INANEISHVILI, Eteri LIPARTELIANI, Luka KAPANADZE and Mariam TCHANTURIA made it a 4-0 success and a bronze medal triumph.

The second bronze went to Germany who impressively beat the #2 seeds, France,4-0 in the last contest to secure their podium positon. On their merry way to the bronze medals, they lost out only to the eventual winners but conquered the Finnish and Portuguese in style. Marlene GALANDI and her ne waza skills were especially enviable today, with her final bout securing the team win.