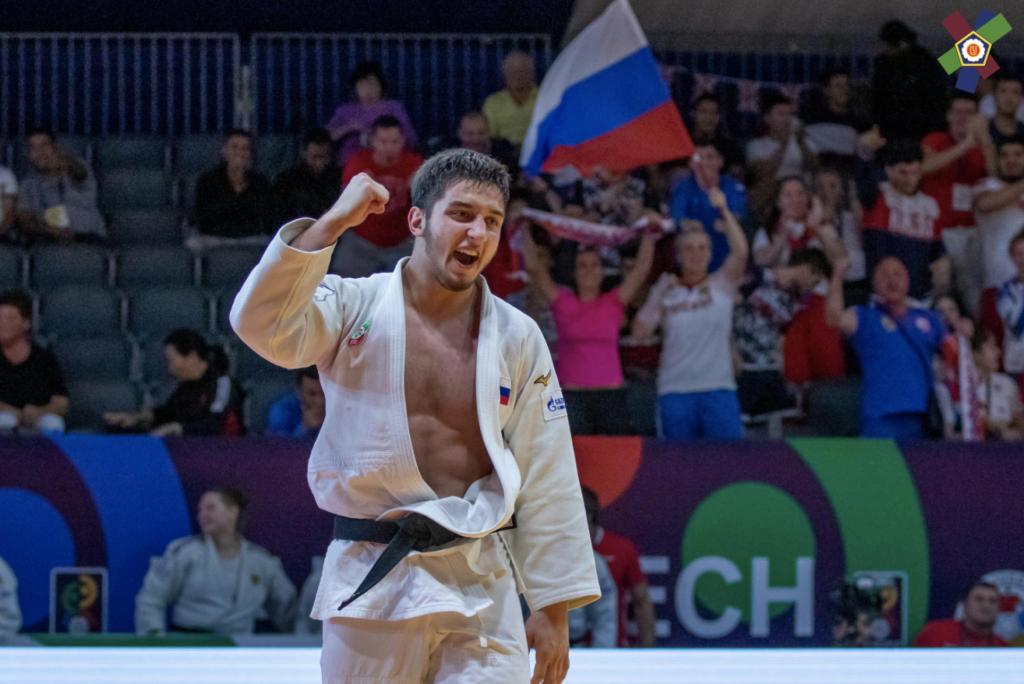 The final block saw the arena packed for the last afternoon of judo in this Junior World Championships 2019. This morning proved to be a great success for Europe, taking four of the teams to the medal contests.

First up was Georgia and Germany, both bronze medallists from the Junior European Championships in Vantaa and was sure to be a tough fight.

The initial contest of the final block was between Vladimir STARK for Germany and Luka KAPANADZE of Georgia, and though it felt like an even contest, the German was first to put a score on the board. As a win was quickly slipping from his grasp, KAPANADZE fought hard and evened the score with only five seconds left on the clock. With STARK having picked up what looked like a foot injury, KAPANADZE countered to take the win. Mariam TCHANTURIA showed her superior strength in the contest against Marlene GALANDI with a huge counter for ippon which only raised the spirits of the Georgians more. Mikheili BEKAURI scored twice against the -90kg bronze medallist Louis MAI, making the score 3:0 to Georgia.

Christina FABER fought hard against Salome MAKISHVILI, with multiple harai and o soto attempts before one finally landed for a waza ari score which she quickly transitioned in to osaekomi, the first win for Germany! Given Erik ABRAMOV’s success the past couple of days, there was hope placed back in to the next round, however, he couldn’t get past Gela ZAALISHVILI, in fact finding himself on the wrong side of an ippon seoi nage, which resulted in an overall win for Georgia and a bronze medal.

Brazil took on France for the second bronze medal, France getting off to a convincing start with Israil DAKAYEV winning his contes with a submission from Jeferson SANTOS JUNIOR. Morgane FEREOL continued the winning streak, controlling much of her contest, her opponent, Ryanne LIMA barely having a chance to get grips before a well controlled uchi mata gave France their second win. The third contest was a different story between Francis DAMIER (FRA) and Guilherme SCHIMIDT. The tall athletes were able to escape each others attacks and and it seemed the fight could end up in golden score but after a clinch, SCHIMIDT was countered and unfortunately fell badly on his neck, causing serious injury and an immediate withdrawal as he was stretchered off the tatami.

Tahina DURAND of France was evenly matched with Anna SANTOS in the +70kg category but the Brazilian was determined to pull her team back in for the win and scored ippon with harai goshi and made it 3:1. Next up was Lucas LIMA to fight for Brazil and despite it being a rocky start, the Frenchman, Tanou KEITA couldn’t seem to combat LIMA and was thrown in to ne waza, adding another win to the scoreboard for Brazil. Ophelie VELLOZZI was France’s deciding athlete, and a tough fight was held against Vitoria ANDRADE, eventually Brazil picked up a third shido and France took the second bronze medal.

The much anticipated final of the Junior World Mixed Teams Championships saw Russia and Japan face to face, exactly as in the Senior World Championships in Tokyo this year. The two nations consistently making it to the top.

It was all off to a great start for Russia as Makhmadbek MAKHMADBEKOV led a barrage of attacks against TSUKAMOTO Ryo, but it was a fight for the grips for the Japanese which forced him to pick up three shidos for passivity, the timing just would never have been perfect.

Dali LILUASHVILI took on ASAHI Mami in the next fight, it was a close call on the ground but LILUASHVILI managed to escape, but further in to the contest, ASAHI pulled out an explosive uchi mata for ippon. Mansur LORSANOV had been very strong throughout the day, defeating the current Junior European and World Champion, Lasha BEKAURI (GEO) in the semi final,

In the semi final against Bekauri, well we know each other very well, I lost against him in the semi final contest in the European Championship and I was much more committed this time and I won.

Then another challenge was thrown at him in the shape of MASHIYAMA Kosuke, the pair entered golden score with a shido a piece but only 24 seconds in, LORSANOV put in an attack that wasn’t his strongest and was countered, making the score 2:1 to Japan.

Daria VLADIMIROVA was put under great pressure by TAKAHASHI Ruri in the +70kg category, and found herself narrowly escaping osaekomi twice, but it was three times lucky for the Japanese. Valeriy ENDOVITSKIY walked on next for Russia, with a decider on his shoulders, only one more win for Japan would hand them the gold. It turned out the extra pressure did him a huge favour, he moved quickly, attacked with some ashi waza taking his opponent MATSUMURA Sosuke off balance before coming in with the ippon scoring technique, taking him backwards. The Russian team cheered with delight, it was now 3:2.

KAWADA Ayumi and Daria KASHINA put on an acrobatic performance in the final contest in the -57kg category, avoiding each others techniques and escaping scores. An initial score from KAWADA upped the tempo of the match and a second score was awarded before being removed, offering Russia a second chance, alas it was short lived. A seoi nage ended the contest and the final score was 4:2 in favour of the Japanese, but regardless of the outcome, the crowd were on their feet and applauding the efforts of both finalists.

Once again the mixed team event proved to be a fantastic addition to the Championships and will be a greatly anticipated event in the Olympic Games next year. Congratulations to all of the participants here in Marrakech, 243 of which were from 41 nations across Europe. Japan topped the medal table followed by Georgia and Russia in #2 and #3 position.