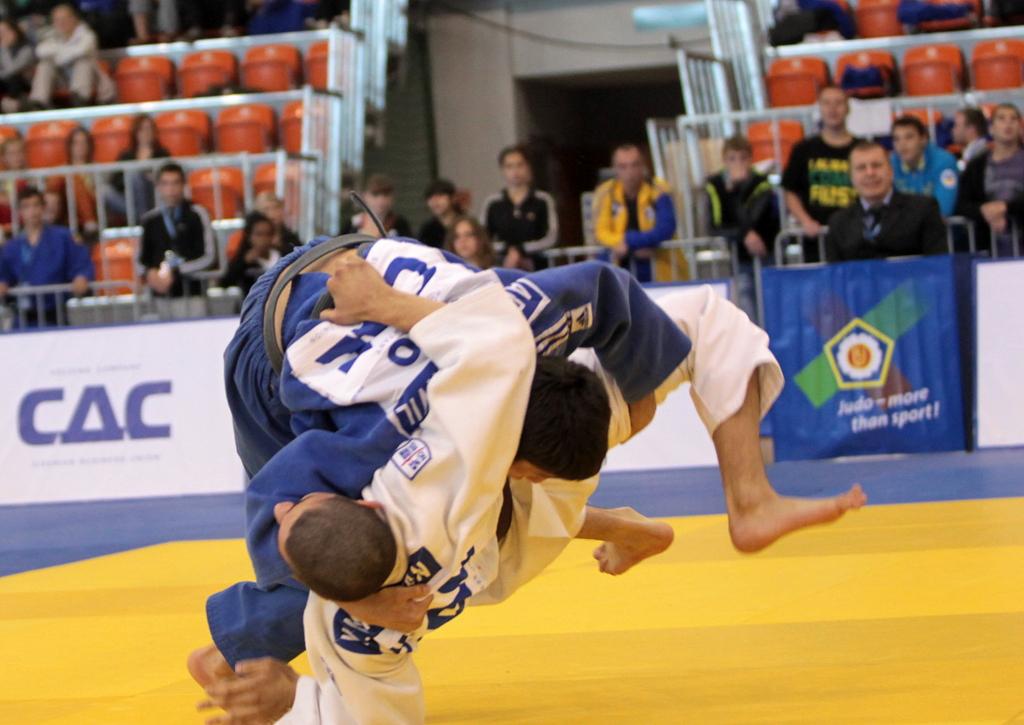 At the second day of the Cadet European Cup the Russian team has won the most medals. Not only in terms fo gold, but also the number of ten medals was impressive. Host Poland added a lot of medals but could not celebrate a gold medal and stranded with two silver medals and 3 bronze.
The tournament in Bielsko Biała, the capitol of Podbeskidzie, showed a good distribution of medals among various countries. 18 Different countries won a medal this weekend.

At the second day of the EJU Cadets European Cup the best judoka were representatives of Russia, France and Germany. They were standing on the highest steps of the podium most often.

In the category up to 57kg final the fight was between Marie Klose (GER) and Veronica Ivanova (RUS). The better cadet in this match was Russian Veronica Ivanova.
Bronze medals went to Gaby de By (NED) and Stefania Adelina Dobre (ROU).

In the next category U63 the gold medal was for Aleksandra Samardzic from Bosnia and Herzegovina, who won against current silver medalist of the last Cadet European Championships, Patricija Brolih (SLO).
The third positions were taken by Adrianna Antczak from host Poland and Szabina Gercsak from Hungary.

In the category U70kg the first place was reserved for Brigita Matic from Croatia. She won final match against Anna-Maria Wagner from Germany.
A bronze medal was awarded to Marie-Eve Gahie from France and Kasandra Hanelt from Poland who took the second medal.

In the last category the best was Greta Neuschwander from Germany, who won against Kamila Pasternak from Poland. Bronze medals went to Paula Kulaga from Poland and Olaso Lidia Yarza of Spain.

In the men’s division a very interesting was fight the first category until 73kg. It was no wonder that we could see the fight between representatives of Russia, Zaur Ramazanov and Gamzat Zurgaraev. The winner was Ramazanov. Bronze medals went to Dominik Druzeta from Croatia and Christ Gengoul from France.

The final fights of the category U81kg was between Russian judoka Magomedrasul Kuzgov and Georgiam Nikoloz Sherazadishvili. The Russian Kuzgov was the winner of the bout. Bronze on the stage for Yoshiaki Shirakawa from Japan and Oleksandr Logvinenko from the Ukraine.

In the weight category U90kg Karen Palian from Russia won the gold. He fought Ionut Vasian from Romania in the final. Bronze medals was for Leonhard Schuetz from Germany and Rokas Nenartavicius of Lithuania.

In the heavyweight category +90kg Aaron Phillip Wolf defeated Fedir Panko from the Ukraine and bronze medals went to Ruslan Shakhbazov from Russia and Messie Katanga from France.

The French team ended with seven bronze medals. French coach Amina Abdellatif said: “The level was really higher than last year. We could watch a lot of good matches. There were girls from over 28 countries and competitors from Japan. We have watched great fights.”

Abdellatif was happy with the organisation: “Everything is prepared well. The sports hall is spacious enough and the views of the tatami are beautiful.”

Watch the photos and review the results here: