Russia takes it all in 2012; World Team Champion 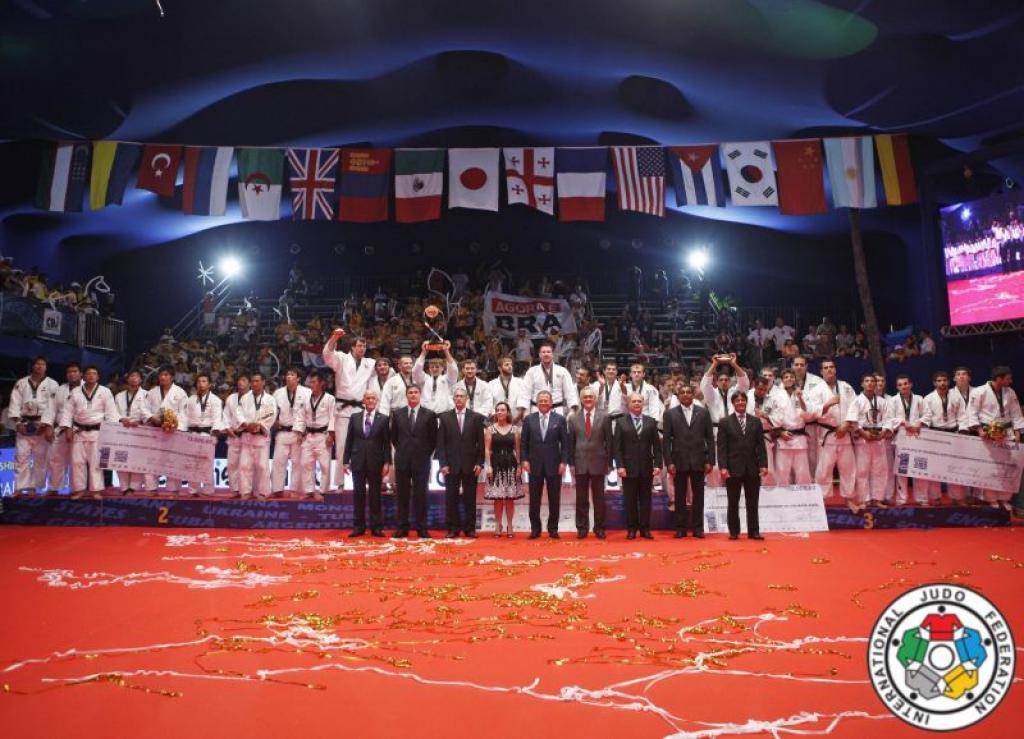 Russia is the new World Team Champion. What a year for Russia after taking five Olympic medals and three Olympic titles at the Olympic Games and now in Salvador de Bahia (BRA) the team of coach Vitaly Makarov won the world title for the first time in history.
In the final Russia met with the team of Japan.
The first fight of the final of the day opposed Ebinuma (JPN) and Pulyaev (RUS) in the men’s -66kg. The world Champion from Japan threw Pulyaev for ippon in the first match.
The second fight opposed Awano (JPN) and Kaytmazov (RUS) U73kg. A small yuko for Awano, and a second point for Japan.

The third fight of the final of the men’s competition, saw Nagashima (JPN) and Khabachirov (RUS). At the end of a very tactical fight, the decision was made by 2 penalties against the Japanese, and one against the Russian. The fourth match of the final opposed Masashi Nishiyama (JPN) and Magomed Magomedov (RUS). Dominated by the high gripping of the Russian and totally exhausted Nishiyama was rapidly penalized with a first shido, followed by a second one, a few seconds later for the same reason.

Triple world Champion and Olympic silver medalist, Mikhaylin (RUS) fought against Shichinohe (JPN). After three minutes, four penalties were already distributed (2 for Shichinohe and 2 for Mikhaylin). But Mikhaylin found the necessary energy to score a yuko just on the edge of the tatami. Totally exhausted, the Russian literally finished on his knees, but victorious, offering the ultimate tittle to Russia. After the three Olympic titles won in London, this team victory sounds like the domination of Russia over the judo planet.

Bronze Medals Fights: Bronze for Brazil and Georgia
The first bronze medal fight opposed, Georgia and South Korea
European Champion Varlam Liparteliani finished the bout after the fourth fight of the team match against Kwak (KOR). After two editions without medals, the 2006 and 2008 World Champion Georgia now claimed the bronze medal.
The second bronze medal match was particularly awaited as it sounded like the final of last year’s championship in Paris, when France won the title. A perfume of revenge was flying in the air of the packed arena and the temperature dramatically raised. Revite (BRA) won the first match against Dragin (FRA). In the second Allardon (FRA) ruined the hopes of the public for an immediate second point for Brazil with an excellent point. In men’s -81kg, it was the turn of Penalber (BRA) and Pietri (FRA) to enter the mat. In the golden score Pietri gave the second point to France. Ludovic Gobert led comfortably in his match against Silva (BRA). He only needed to keep the lead in the last 30 seconds. But Silva continued and scored with a counter attack in the last second, giving Brazil the opportunity again for a medal. What an incredible scenario! Rafael Silva won his last match after hansokumake against Matthieu Thorel and gave the bronze medal to Brazil. The revenge was sweet but narrow.

Photo and text by IJF Media