RUSSIA TAKES IT ALL 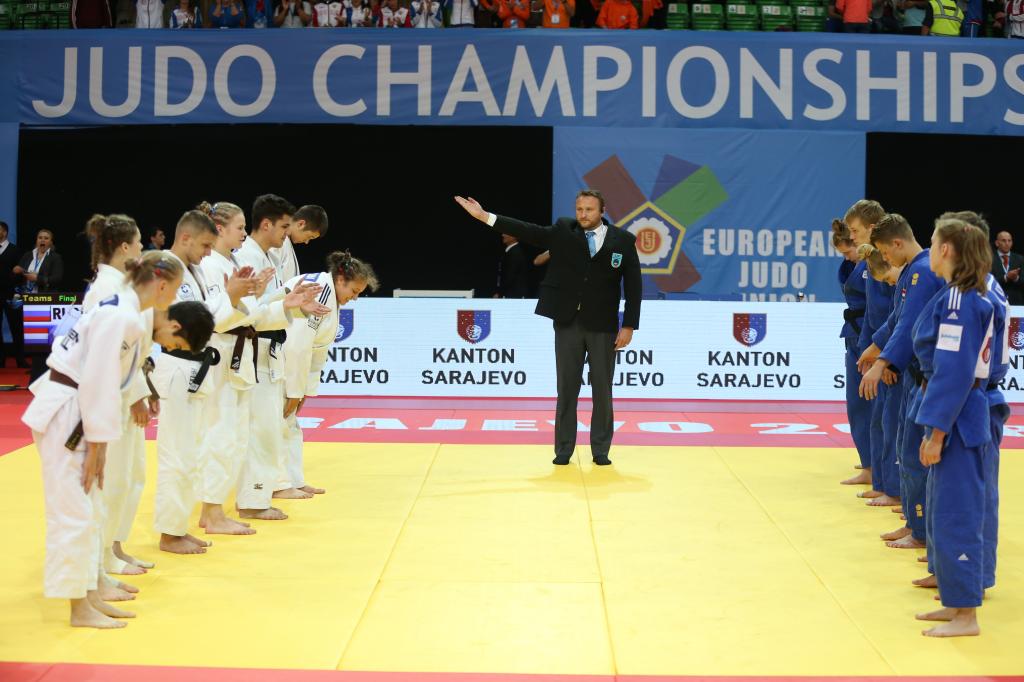 Russia, by now already the top country in the individual medal tally, takes it all again today with the first place in the mixed team championship. Russia went through the day by defeating Hungary 5:1, followed by Romania in the semi-final 5:3 to meet the Netherlands in the final.

On the other side, the Dutch team beat France in the first round 5:1 and then Georgia in the second round 5:4. At the end of the regular contest it was 4:4 and the draw to select the deciding fight chose the +63 kg competitors to refight. Georgia did not have a heavy-weight girl because she was injured in a previous fight. So the last point went directly to the Netherlands. They secured the ticket for the final with a victory 5:3 in the semi-final against Turkey.

In the final, Russia began strong with Glafira BORISOVA defeating Indy GODSCHALK in the first match of -44 kg by ippon. After the competition, she said:

“I had never before fought my final opponent, GODCHALK Indy (NED). I managed to watch some of her fights prior to the contest, so I had a good idea how to fight her. With my coach and also through my own planning during the contest I changed the fight plan to help towards my win. I also had great support from my team.”

The Russian team continued to win the next two matches for a 3:0 win until the match between Dylan VAN DER KOLK and Shamil UMAEV. Both players fought fiercely all the way into golden score. After 7 minutes of overall contest time, Umaev attempted a ura-nage and Van der Kolk was able to react quickly and counter him in mid-air for ippon, winning the first match for the Netherlands.

The next match was -63kg, Russia’s Tatiana GUZUN fought strongly against the current European Champion, Marin VISSER until golden score. Guzun surprised Visser with a strong o-uchi-gari off the grip just 15 seconds into golden score time for a waza-ari to secure the fourth win for Russia.

In the next match it was a re-match between the -81kg individual champion Daniil UMAROV and silver medalist Mark VAN DIJK. Umarov was leading with a waza-ari until two and half minutes. Umarov attempted a ko-soto-gari and was countered by Van Dijk with uchi-mata, over-rotating onto his side and gave Van Dijk a waza-ari. The match was very crucial for the Netherlands if they wanted to stay in the game, with one minute left on the clock, Umarov came for a drop seoi-nage and Van Dijk countered it with a daki-wakari for ippon.

With a score of 4:2, Russia needed one more win to finish this team contest, but Netherlands had to try their best to stay in the match. It all came down to the girl’s +63kg category between Anastasiia KHOLODILINA and Marit KAMPS. The Dutch girl seemd to be the favored one to win coming as the silver medalist in the +70kg individual competition. However Kamps was not able to score on Kholodilina and the match went to golden score, where Kholodilina managed to secure a waza-ari from a counter. This secured the Russian team’s first place in the mixed team event.

“We have two girls who complete in the in the heavyweight division. We asked them who would like to compete in the final and Anastasiia immediately said “I am ready”. We trusted her and she did not disappoint.

We are one team and we work together. In some fights the boys struggled and we lost some points and in other matches the girls had problems, but then our boys did well in their next fights. That is the good thing about the mixed team event. It worked at the last World Championships and again this year. We are very happy we have won this title today.”

Vladimir Gladchenko, the boy’s coach revealed his thoughts after the medal ceremony:

“I was not afraid to lose the final because we already had our secret weapon ready – the current European Champion KANIKOVSKIY. He was chosen for the last fight and I was sure that he would get the last point.”

The two bronze medals went to Turkey and Romania. Both teams won their places on the podium in spectacular style. The decision of both fights at the end came from the draw for a deciding contest, because both teams finished winning four contests. The players from the -66kg (TUR vs HUN) and -81 kg (FRA vs ROU) were drawn. Umalt DEMIREL for Turkey and Adrian SULCA for Romania won their rematches by spectacular ippon throws and were celebrated by their teams.