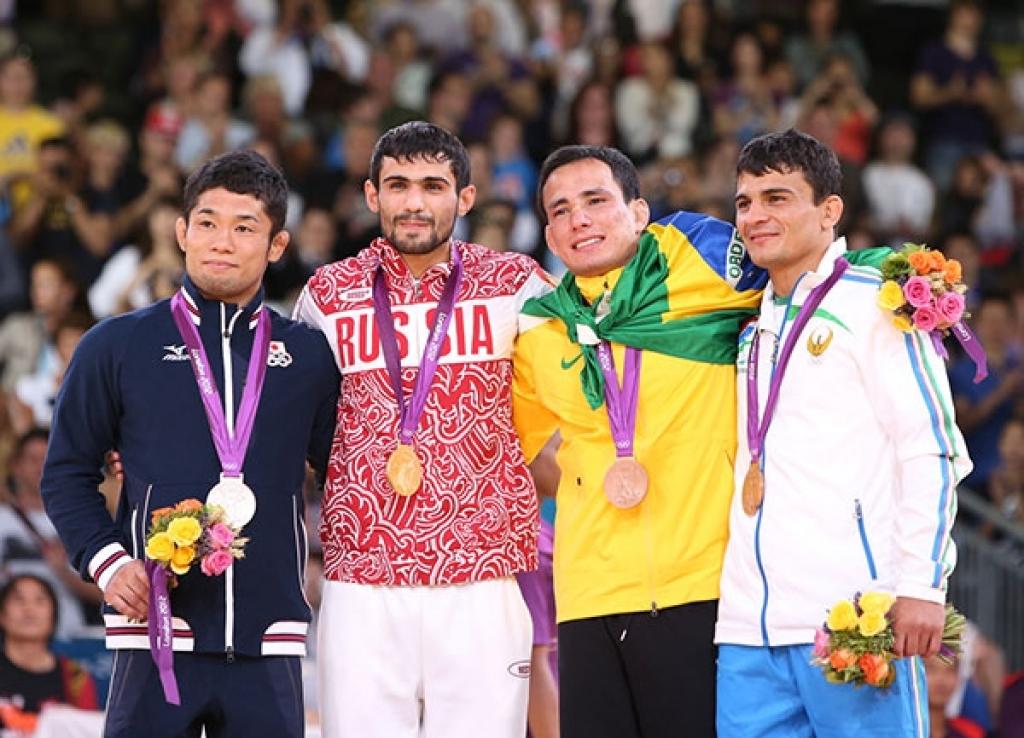 Arsen Galstyan has done it. As first European at the 2012 Olympic Games he collected the gold medal. For Russia and all its potential medallists it is a gigantic stimulance for more medals.

The biggest sensation was his win over double world champion Rishod Sobirov, who he had beaten earlier this year at the Masters. Again he made hhis nemesis status come true and defeated the Uzbek.
In the final Galstyan defeated Hiroaki Hiraoka from Japan. The Japanese had a great semi final against Ezio Verde and seemed to be a tough opponent. Galstyan however hit the Japanese with a full ippon and won the first Olympic gold for Europe.

A mega success for coach Vitaly Makarov and technical director Ezio Gamba. Exactly 11 years ago Makarov won the world title in Munich. Now Galstyan is crowned as new Olympic Champion.
He is the first Olympic champion in the history of the Russian Federation. In the time of the Soviet Union, the last two Olympic Champions were Sergey Soloduchine (65kg) and Shota Khabareli (U78) in 1980 in Moscow.

In the women’s division the success was almost as big. In the final Alina Dumitru couldn’t hold the 22-year old Sarah Menezes from gold. However Dumitru again reached the final. In the semi final she defeated Tomoko Fukumi, the favourite for the title. But Fukumi also lost the bronze medal fight against Eva Csernoviczki of Hungary. Her greatest ever success.
Another great medal for the third European on stage Charline van Snick who took a bronze medal after her win over Paula Pareto (ARG) who won bronze four years ago. For Van Snick it was her debut.
She lost the semi final against Menezes who was crowned as first ever female Olympic Champion for Brazil.

The new Olympic Champion Arsen Galstyan said:
“I am very happy that I am the one who brought Russia this medal we have waited for for such a long time. I do not have words for my feelings.”

“This medal proves that a Russian judoka can and should be the number one.”

On whether he thought he would win:
“I thought it was possible. I have trained hard for the best medal. I always had hope.”

On his match against CHOI Gwang-Hyeon (KOR) in the quarterfinal, won by hantei (judges’ decision):
“It was a tough match. Probably I did more and that is why the judges decided that I should win. It was one more step on the way to the gold medal.”

Hiroaki HIRAOKA (JPN) – silver medallist
“Four years ago I lost in the first match after I was selected for the Japanese team instead of my older colleague. That’s why I have trained hard to compete here again and win the gold medal. I am not satisfied with the colour of my medal, but I did the best I could do.”
“I was able to come back to the Olympic Games, supported by many people. I got this silver medal because they have cheered me on.”

Rishod SOBIROV (UZB) – bronze
“I got my first bronze medal at the Olympic Games in Beijing. I tried very hard to fight here (for gold), but it was difficult.”

In the women’s category Europe was successful with three medals, but couldn’t prolong the Olympic title:

Alina DUMITRU (ROU)said she will now retire:
“This is my last Olympic Games. I want to go and have a family.”

Charline VAN SNICK (BEL) had mixed feelings:
“We all work a lot to get the gold – we all want to win. I’m a bit disappointed but did a great fight and gave all I had. Next time I will work on it and get the gold.”

Eva CSERNOVICZKI (HUN) was extremely satisfied:
“I still can’t believe I made it. I wanted to win a medal since my childhood and I made it.”

“It was a very hard time for me losing against Van Snick. The beginning were very difficult for me and I didn’t feel good. But I made the reparcharge and I was relaxed in the bronze medal match. I wanted to show great judo. Now I am happy that for the first time I could beat the world No.1 Tomoko FUKUMI”

Good success for Europe. Congratulate your favourites in our facebook.
http://www.facebook.com/pages/European-Judo-Union/256475946911