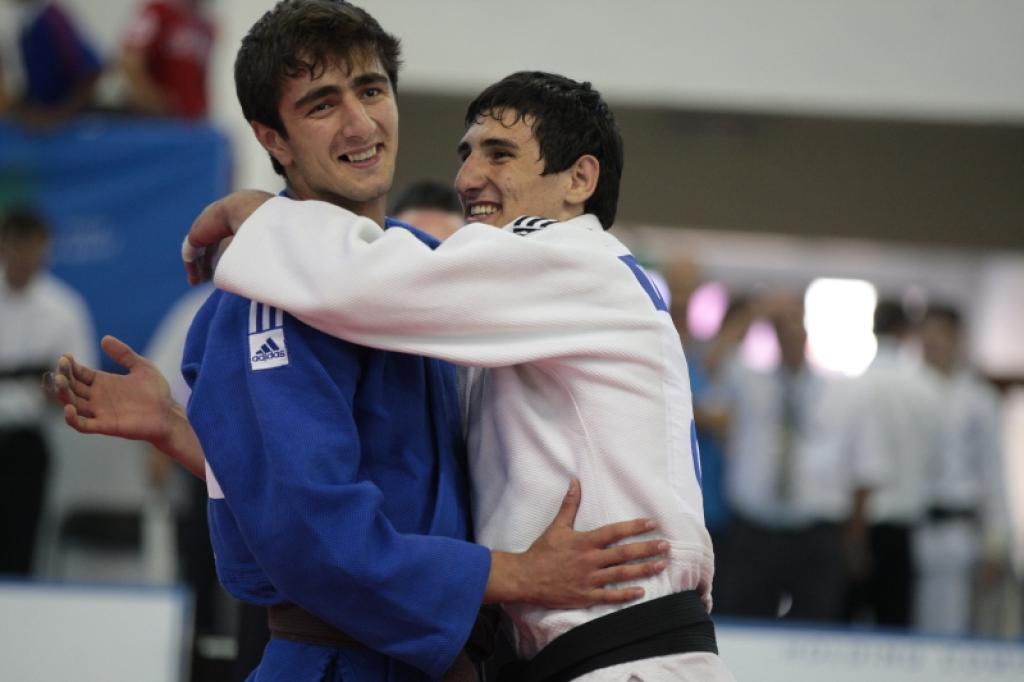 The Russian men completely dominated the European U17 Championships with two finallist in both categories.
The final U66kg was an all Russian occasion and was watched closely by European President Sergey Solovyechik who opened the Championships 20 minutes ago. The President took the time for EJU’s Judo streaming Judo TV channel to tell his thoughts about this championships.

In that Russian final Mikhail Igolnikov countered Ramazan Kodzhakov on his back when he tried for an uchimata and was brought down in the last minute.
Petar Zadro (BIH) and Turkish Murat Bektas kept a clean board for 2.5 minutes but Zadro was given two penalties and Bektas took the lead in the match and hold it for the last minute and added a second yuko 10 seconds before the end to make the difference.
Huseyn Rahimli (AZE) won bronze in his fight against Dmytro Raskin from the Ukraine. He led the match by a good waza-ari but Raskin gave good opposition and scored two yukos. Rahimli (AZE) hold his advantage and won bronze.

Suleyman Vyshegurov dominates in U73 category
In the men’s event U73kg amazingly strong judo today by Suleyman Vyshehurov of Russia. In his final he defeated his teammate Rustam Gerekov.
In Russia there is so much choice that it was expected that this category was dominated by the Russians. Last year Vyshegurov already won silver last year and grew further at that level. This year he showed his skills in Zagreb and Berlin when he won these European Cups.
After 2.5 minutes Russian U17 Champion Vyshegurov exploded with one action and scored the ippon despite good opposition by Gerekov.
Georgian Levan Gugava fought an great fight in his semi final against Vyshehurov but won bronze afterall in his bronze medal fight against Vitalii Derevianko of the Ukraine.
Firudin Dadashov (AZE) didn’t need too much time in his bronze final against Beka Donghvani of Georgia and won a second bronze medal for his country today. In total Azerbaijan collected four bronze medals and a silver, all in the men’s division.

Enjoy the pictures in our website and video footage in our You Tube Channel later. Follow the video stream tomorrow again with a start at 11.00 o’clock.