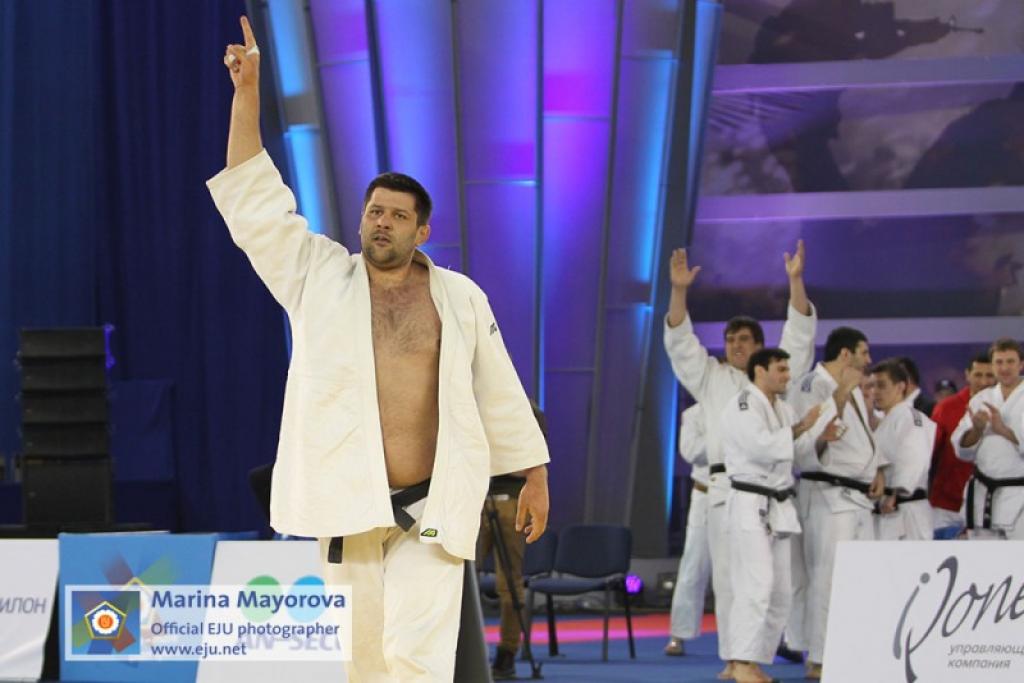 At the brand new «Judo Academy» in Zvenigorod the traditional International Judo Tournament for police, army and other forces was held, dedicated to the 90th anniversary of the «Dynamo» Society. Team of MIA of Russia has achieved glorious success, leading in the finals over the team of Japan by 3:2. The Russian policemen have proved the champion title for the seventh time already and have devoted their competition to the «Dynamo» Society – national leader in the field of officers training. The bronze medals were awarded to the police team of Belarus Republic and Internal Troops of the MIA of Russia. The tournament was co-organised by the European Judo Union, led by President Sergey Soloveychik.

The path to the gold of the MIA of Russia started with the tense fights with the teams of Ukraine and Belarus, the outcome was to be decided in the +90 kg category. In both cases Russian heavyweights Timur Buchukuri and Rustem Arslanov performed their best and managed to get the required score for the team. In the semi-finals Russian policemen did not leave any chance for their colleagues from Internal Troops, having gained 4 victories out of 5 possible ones.

The finals of the Tournament became a real gift for all sports fans. Two police teams appeared to be fighting for the champion title: Russia and Japan. The pioneers of judo that had left the previous year event without medals brought their strongest team to Zvenigorod. Athletes from the Land of the Rising Sun have shown great judo techniques and won over the police of Tajikistan (4:1), then easily gained victory over General Procuracy of the Russian Federation and Tax Service of Azerbaijan (5:0). Japanese team has reached the finals with a strong intention to finish the glorious sequence.

In 2 initial fights Kengo Mimura (66 kg) and Yuki Yoshida (73 kg) followed their plan: they have won over Denis Pavlov and Marat Kasumov, and made Russian spectators hold their breath. Azamat Sidakov became the centre person of the third fight, when he won over Yudji Sonoda and brought the Russian team the first score. Despite the finger  micro-trauma Vladislav Filin (90 kg) overcame Nobukhis Nojima and equaled the score. The lucky end to the finals was put by the master of sports of the international class Timur Buchukuri (90+ kg), who has defeated Yuta Kanzawa.

At the anniversary year (for the «Dynamo Society) the team of MIA of Russia has become a champion for the 7th time in a row. According to the police lieutenant Azamat Sidakov, who has drastically changed the way of the fight, the finals turned out to be complicated:  «We usually train especially hard for these competitions, because great responsibility is laid upon us – we are to stand up for Russia. We did not expect that the Japanese will immediately lead 2:0, so we could not make a mistake, we had to handle our emotions and trust in our victory. Our team has a strong spirit, all together we pulled baker, waited, gave all to it – and we are the champions once again!»

Police teams of  Belarus and Internal Troops of MIA of Russian confidently won the bronze medals, having left the teams of General Procuracy of Russian Federation and Tax Service of Azerbaijan in one step from the victory.

The finals of the Tournament were preceded by the Opening Ceremony. The Chairman of the Guardian Council of the «Dynamo Society», Vice-Chairman of the Security Council of Russian Federation R. Nurgaliev delivered the greeting on behalf of the President of Russian Federation – V. Putin. The greeting highlighted the great significance of the charity initiative, taken by the Organizing Committee.  Thousands of spectators and the participants of the competitions paid tribute to the memory of the officers killed in the line of duty with the minute of silence. Russian stage stars – Irina Dubtsova, Ekaterina Guseva, Tamara Gverdziteli – dedicated their songs to the passed heroes.

This year the annual tradition of targeted assistance provision for the families of the officers killed in the line of duty was supported as well. Due to the decision of the Chairman of the Tournament, President of the International Judo Fund Arkady Rotenberg, and with support of the partners of the competitions, keys of the apartment and 8 brand new Hyundai cars  and an SMP Bank plastic card were handed over to the relatives of the heroes. The awarding ceremony was held by the Vice-Chairman of the Tournament Organising Committee, President of the National Veteran Judo Union Pavel Balsky.