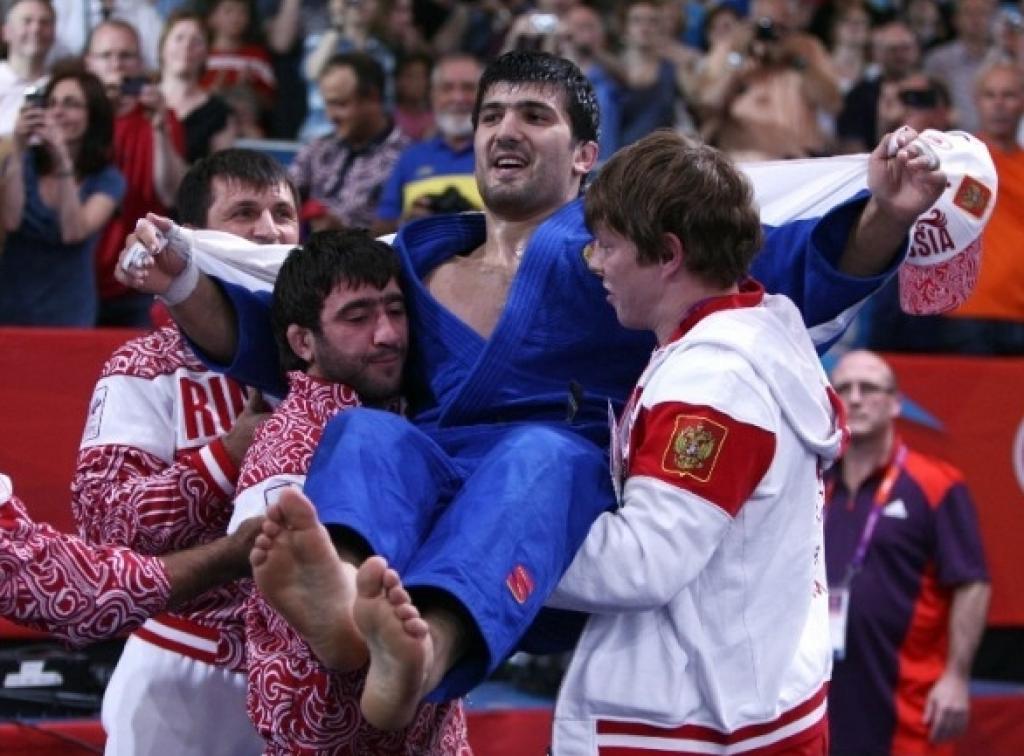 For the first time the Russian Federation was able to win gold, and three gold seemed like a compensation of past years when Russia was able to take a few final spots, but without a golden results in the end. Only in the Soviet time there was gold. The 2012 Olympic Games make you forget everything.

Tagir Khaibulaev (U100kg), Mansur Isaev (U73kg) and Arsen Galstyan (U60kg) won the gold last week.
Tagir Khaibulaev (RUS) took Russia’s third judo gold medal in the London 2012 Olympic Games in the men’s -100kg, even witnessed by President of the Russian Federation Vladimir Putin.
Khaibulaev: “I tried not to think about it because I did not want to
disappoint. It was very nice that he congratulated me personally. He was very happy about the result. He was with our team and helped us. He trained with us. Maybe you know that he is a judoka himself, a master of the sport. I am glad we were able to show this result.”

What is the secret of Russian judo these Olympic Games?
Khaibulaev: “These past four years we conducted a very productive work with our coach Ezio Gamba (ITA) and our other coaches. We expected to win some medals here, but we did not want to predict anything. The fact that we won several medals show that not just one of us was ready but the whole team was well prepared. This is thanks to all our coaches. Before Gamba, we had good coaches as well, but when he came from Europe he got all the conditions for his work he needed. He used them to a hundred percent. His training programme brought us success right at the Olympic Games. Hats off to him.”

Ezio Gamba was Olympic Champion as Italian judoka in 1980 in Moscow and collected silver at the 1984 Olympic Games in LA and won two silver medals at World Championships.

The victory of Arsen Galstyan, the winner of the gold U60kg, was important for the team. His amazing performance, beating Sobirov in the first place and secondly winning his final against Hiraoka (JPN) was a great motivation for the team.
“I am very happy that I am the one who brought Russia this medal we have waited for such a long time. I do not have words for my feelings. The medal proved that a Russian judoka can and should be the number one” and it proved to be a great motivation.

Although the second day brought bad luck with the first match lost by Musa Mogushkov, who was a true favourite, but the team kept going at day three.

Mansur Isaev was the winner of the men’s category U73kg on Monday. The Russian defeated Riki Nakaya in a fantastic competitive final. Isaev kept calm in the final and stroke at the right moment taking a yuko difference that he never gave away. It was also a great success for coach Vitaly Makarov who himself lost the final U73kg at the 2004 Athens Olympic Games. Now he could close his judoka in his hands and share the second Russian victory. EJU President Sergey Soloveychik presented Isaev the flowers in this second golden day.

Isaev: “I feel great. I am so happy for Russia and that our country can be proud of the medals. I want people to understand that we have worked so hard these past four years not just like this but to fulfill this dream. The medals are a cumulation of all your efforts, all your training, all your preparation.”

At the fourth day, Ivan Nifontov took a bronze medal U81kg, another great medal, not impossible in advance, but definitely surprising. Nifontov couldn’t stop smiling and was emotional after also Khaibulaev won the fight for gold. Also for hi these Games were a relief:
“To me, it has a golden tint. I am still not fully recovered, but my injury does not bother me anymore.”
“Vladimir Vladimirovich (President Putin) often comes to our competitions and it is a great honour for us. We didn’t not want to let him down. The way our team is performing he just had to come. All our guys fought to please him with medals.”

The fifth day didn’t deliver a medal in the end when Kirill Denisov lost his bronze bout in U90kg. ” I was not dominating the match. I simply could not do this and use my special techniques. I did not expect such a result.”

Alexander Mikhailin won a silver medal. Although he was not satisfied with the result, he also gave credits to headcoach Gamba: “He is the magician who achieved what nobody did before. We won five medals, three of them gold and we have two other guys in medal position. Maybe he gave us a new belief in ourselves. He believed in our strength and he prepared us very well.”

Watch the moments the team celebrated the third gold medal of Tagir Khaibulaev in our media gallery: