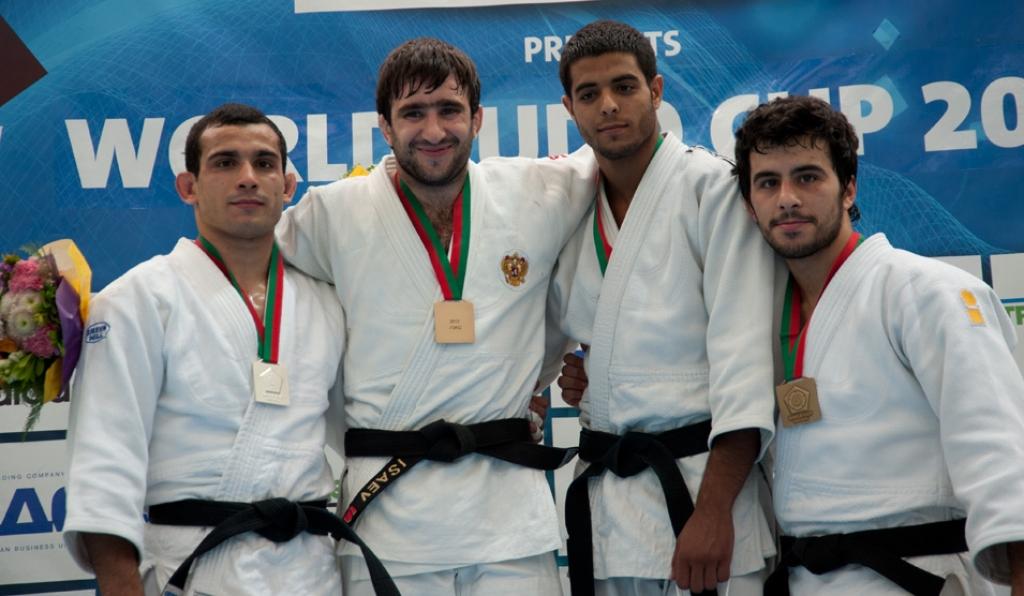 At the world cup for men in Portugal, the Russian team has again collected all possible gold medals of the first day. Similar to last week in Madrid, this team is completely different but very competitive to last week’s line-up.
Headcoach Ezio Gamba is sometimes in a difficult but luxurious position choosing from the number one or three of the World Ranking, such as in the category U66kg between Mogushkov and Gadanov. Today it was European Champion Alim Gadanov who took the victory U66kg. Another European Champion, Beslan Mudranov did the same U60kg and Mansur Isaev was the expected winner U73kg.

The Russians can fill up two full teams for each weight category and all with medal candidates at Olympic level.

At -60kg, as predicted the final was between the Current European Champion from Russia Beslan MUDRANOV (6) and the French Sofiane MILOUS (14), the European Champion of 2010 in Vienna.
The first semi-final was incredible and opposed the Russian and the Israelian Artiom ARSHANSKY (37). From the Russian many one sided O-Goshi attempts and from ARSHANSKY many Ko-Soto-Gake attempts. None scored until 100 seconds to go. MUDRANOV scored ippon with an amazing Ura-Nage, but it was awarded as WAZARI and the show kept on going. Another Ko-Soto-Gake this time countered with O-Uchi-Gari and MUDRANOV scored Yuko. Fifteen seconds left on the clock and a marvelous Israelite Koshi-Guruma almost turned the tables, no score but a great moment.
The second semi-final was between the French Sofiane MILOUS and the Javier GUEDEZ of Venezuerla. With a Shido to GUEDEZ the fight went to the Golden Score and finished with 7 seconds to go with another Shido. MILOUS was into the final.
This final started with a great gesture of fair play, it was not the quick shake hands was one shared between two great fighters. It was a very disputed final that finished after a disputed grabbing that ended with a Sumi-Gaeshi by the Russian when it was one minute to go, Ippon scored.
Last week in Madrid Arsen Galstyan (RUS) claimed the victory in the Spanish capital.

The fight for bronze between the Portuguese Nuno CARVALHO and the Artiom ARSHANSKY (ISR) was tight and had to go to golden score. Twenty second before the end, with a classic Morote-Seio-Nage the ARSHANSKY scored ippon and took the bronze medal.
The other bronze medal went to the Czech Pavel PETRIKOV, until the end neither PETRIKOV nor GUEDEZ had scored and the decision went to the CZECH, 2-1.

The semi-final U66kg between Alim GADANOV and the Ukrainian Hevorg HEVORHYAN was a great example of GADANOV diversified judo, started by scoring Yuko with a right sided Sode with left handed grips, then scored WAZARI twice, first with one handed Morote-Seio-Nage, and then with an O-Uchi-Gari, a countered to an attempt of Ko-Soto-Gake.
The Second semi-final opposed the Portuguese Sergio OLEINIC and the Israelian Golan POLLACK, a rematch of last weekend semi-final in Madrid. This time OLEINIC won by Ippon in the golden score, taking the crowd wild with him to the final.

The fight for bronze between the Portuguese Pedro JACINTO and ‘pickup’ Golan POLLACK started with an amazing pick-up but no scored was given, but POLLACK was on fire. As in his previews fights it seemed a question of time. With 3 minutes to go another incredible pick up, this time Ippon was given.
The other bronze medal fight went to golden score but till the end no one scored, although decision seemed clear, 3-0 the Ukrainian Hevorth HEVORHYAN. The Belgian Kenneth VAN GANSBEKE was fifth.

The final between GADANOV and OLEINIC had its moments, with good ashi-waza work from both sides, but just one score, WAZARI a countered by the Russian. Very secured, GADANOV managed the advantage until the end.
Last week Mogushkov defeated Golan Pollack (ISR) in the final, who took the bronze medal this weekend.

Mansur Isaev didn’t show himself too much in 2012, he won bronze at the Masters in Almaty and wasn’t too convincing at the European
Championship in April in Chelyabinsk taking a seventh place. However he is still ranked fourth in the world. Murat Kodzokov is his rival for an Olympic spot but hasn’t won impressive medals this year, so 25-year Isaev is kind of sure about his position.

In Lisbon the U73kg final was between the two best fighters, ISAEV and the Portuguese André ALVES. The first went to the final after winning by Yuko to the Portuguese Jorge FERNANDES, with an O-Uchi-Gari, and ALVES had to go to the golden scored to win also by Yuko to the Israelian Yair SVIDERSKY with a Tai-Otoshi.

Both Jorge FERNANDES and Yair SVIDERSKY went to dispute the bronze medals fights with two Spanish fighters Luis ALCARAZ DEL REY and Joaquin RUIZ ZAJAC, respectively. The Portuguese and the Spanish had to go to the golden score where FERNANDES took the bronze medal and the crowd with an amazing Sasae, Ippon scored. MUKI also scored Ippon with an Tani-Otoshi and took the other bronze medal. The third for his country and the 16th this year so far, 12 of them for the men who are really claiming their domain in Israel. Last year in the same period 10, in 2010 just one, by Ariel Zeevi, so a new wind is blowing.

ISAEV won the gold and ALVES took the silver in the final. With an O-Uchi-Gari just after one minute, ISAEV scored Yuko and it was enough, until the end, no threat at all.

For Russia just luxury, which will be continued on Sunday expecting Magomedov, Panasenkov and Samoilovich.

You can find the pictures here and review the results: