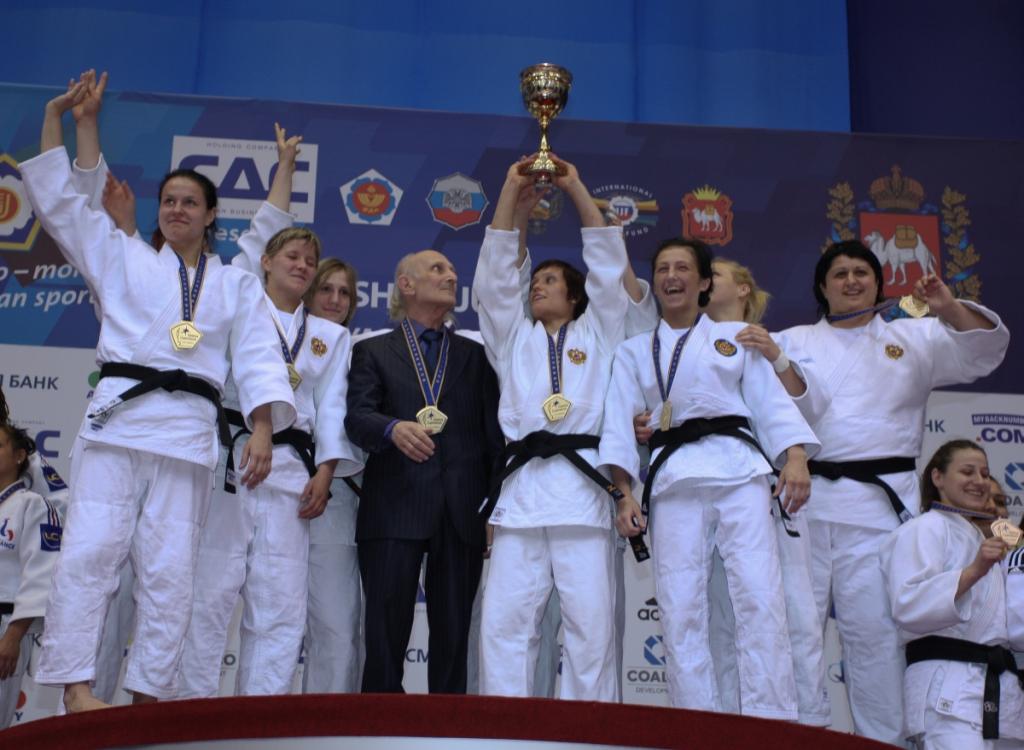 The women’s team of Russia has won the European team title in the final against France. The final started off with Natalya Kuzyutina who was heavily supported by the home crowd at the fully packed tribunes. Kuzyutina scored a waza-ari against Gneto who thought it was her score.

Automne Pavia had to win knowing Russia have their new European Champion Ivashchenko as last match’s security. The tall Pavia did against Irina Zabludina and equaled with a straight Ippon after two minutes.

Without Emane, Tcheumeo or Decosse the team reduces the chance for two wins. Agbegnenou though defeated Marta Labazina within 18 seconds and gave France the lead. Marie Pasquet could finish it but struggled with the tough Daria Davydova who scored a waza-ari 50 seconds before the end giving the Russians and the fanatic crowd a chance again.

Both nations fought eachother more often in finals. Five times in total they met before and completely in balance. For the last time in 2009 when Russia defeated France in Miskolc (HUN). In 2007 France won in the final in Minsk. Mondiere both had already won three European titles. Pasquet in 2003 and 2004, Mondiere in 2004, 2005 and 2011. It tells something about their experience. Gneto, Pavia and Mondiere won the title last year with Emane and Decosse in the team.

It was up to Elena Ivashchenko to win the double this weekend, both the individual as team title. The Russian had won the last four individual encounters against Mondiere, and needed three minutes to get Mondiere the ground for a hold down. Twenty seconds for the crowd to celebrate a possible double, although that didn’t happen in the end.

Tea Donguzashvili (RUS) didn’t have to fight and could watch the final from a distance: “Words cannot describe my feelings. I’ve won against the French once before, and to do it again and to win at home so beautifully is great. The atmosphere in the hall was overwhelming. The French team is very strong and has a lot of successful athletes. In the team each player has her pluses and minuses but that is what the team is for to cover up for each other.“

Elena Ivashchenko (RUS) said: “The last fight was really hard as it was the decisive match. A victory is a victory. The European Championships were the last ranking tournament before the Olympic Games and it was important.“

Clarisse Agbegnenou (FRA): “It was hard to fight the Russians at home. Russia is the strongest nation in Europe and their team is very solid. I think all these girls will go to the Olympic Games that speaks for itself. We wanted to win but it didn’t happen this time. We are a good team, we are the World Champions and were European Champions last year, we felt some pressure. The individual championship was tough and some of us were tired today.“

Bronze medal fights
The women of Germany captured the bronze medal in their fight against Great Britain. The German’s defeated the Brits by 4-1 and led comfortably to a 3-0 intermediate score securing the bronze. However they didn’t let go the match and fought until the end.

Miryam Roper (GER): “It was great. We are really a closely knit team, not just the people on the tatami, but also the others on the tribune. Our boys supported us so much. It is fun to fight in the team. We are there for each other. You win together and you lose together. You can’t really compare it to the individual competition.“

“Romy Tarangul had a strong fight in the semi final against Natalia Kuzyutina (RUS), I lost my fight, maybe it was my fault that we lost. I got nervous when my opponent was leading. The matches were all very close, it could have gone either way. The Russians had the crowd behind them. Now they are in the final,I wish we would have spoiled their party” Roper said.

The Turkish women collected the bronze medal in their match against the Ukraine. Aynur Samat opened the match and won against Buyok. Ozerler scored 2-0 against Levytska. Busra Katipoglu scored waza-ari against Olena Sayko. Seda Karadag was the fourth to win her match and Kindzerska won only match for the Ukraine against the injured Kaya. For Turkey their second consecutive bronze at the Europeans. Last year in Istanbul they won their first ever medal in a team event.

Belkis Zehra Kaya (TUR) said: “This is our second bronze medal since the European Championships in Istanbul last year and we are very happy about it. I had a back problem but today I felt good.“

Look at the pictures in our media gallery and enjoy the vibrations in pictures by Carlos Ferreira.