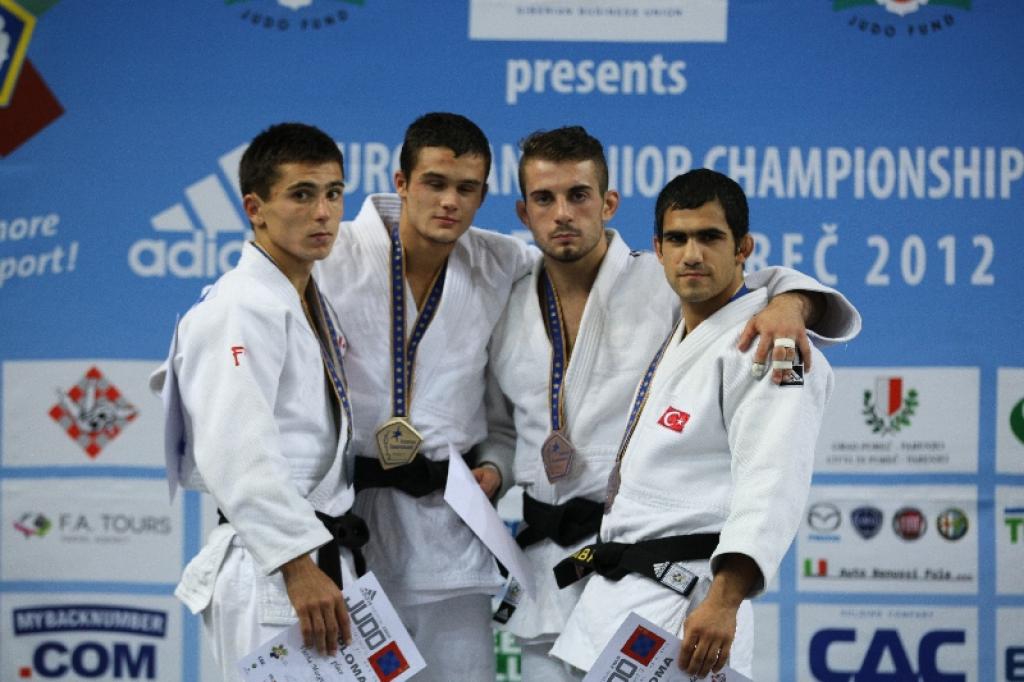 Georgia and Russia are strong nations if it comes to juniors. Lasha Shavdatuashvili is the example of a successful junior last year who won the Olympic title in 2012.
At this year’s adidas European Championships for juniors, Vazha Margvelashvili (GEO) wanted to make start to repeat at least the European title but Zaur Kalashaov (RUS) wasn’t too cooperative in the category U60kg. The Russian won the match with offensive and dominant judo. Last year he couldn’t impress in Lommel but now the Russian was much stronger. He led by waza-ari after one minute and kept his lead despite a yuko for both men. Although Margvelashvili became stronger and the Russian dominance faded away during the match, the clock was in the advantage of Kalashaov who won the gold.

Ahmet Sahin Kaba of Turkey had some impressive fights today that he finished with destroying points. He lost in the semi final against Zaur Kalashaov (RUS).
In his final match for bronze Kaba agains showed he has a few tools to defeat his opponents. Francisco Garrigos (ESP) witnessed it and couldn’t make a difference in it.

The other bronze medal was won by Italian Carmine Di Loreto. His opponent was Andreas Tiefgraber who got the cheers of his teammates when he beat Italian Fabio Basile, but Di Loretto took the lead immediately and almost scored ippon but was recalled to waza-ari. He didn’t gave the match away in the remaining three minutes. Di Loretto: “I beat him before (in Coimbra) by hantei, but today for the second time, so I am happy with bronze.”

The winner Zaur Kalashaov said: “The final was definitely the hardest match of today. He was incredibly hard to throw and I felt that any minute he could throw me. But what was really hard about this competition that I had six fights! All were really high quality fighters!”