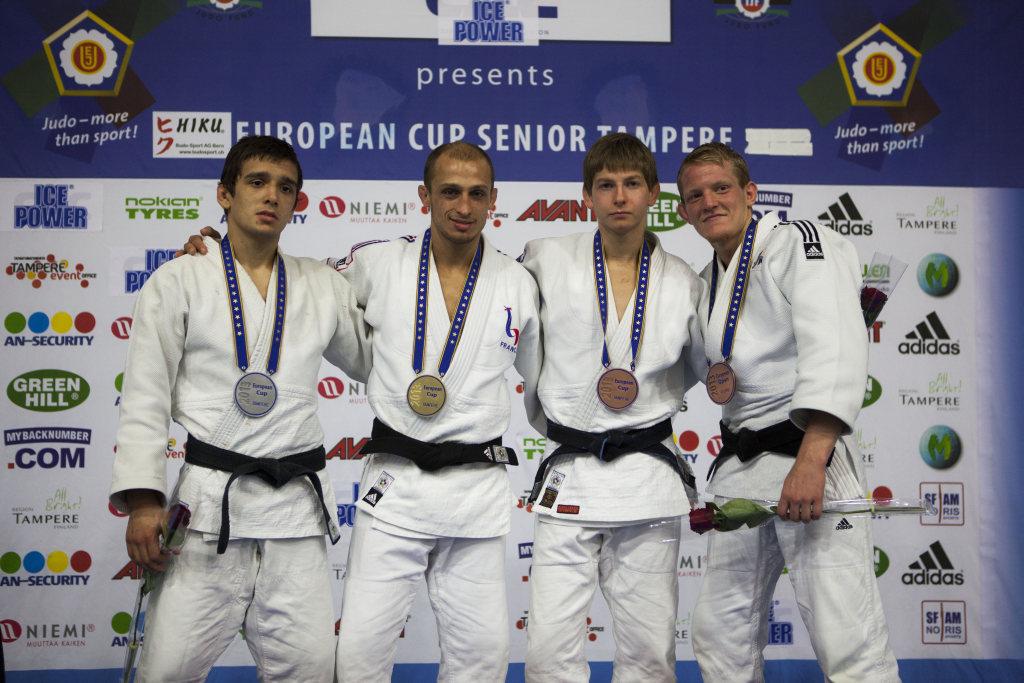 At the first day of the European Cup for seniors in Tampere, Russia won three gold medals, France is second with two gold medals.

In the men’s category U60g Thomas Cadoux-Duc was the winner in his final against Vadud Balatkhanov of Finland. Cadoux-Duc is doing well in the north, he also won the European Cup in Boras last year. Balatkhanov coildn’t repeat his victory in Bratislava of two weeks ago, there he beat Cadoux-Duc in the quarter final, but the Frenchman was now warned. Grzegorz Lewinski of Poland took the gold U66kg. He was the strongest among three Russians on the podium. In total there were five in the top 8 and he defeated two. Roman Bekulov won a silver medal. Ali Khurzev won the category U73kg. The Russian fighter defeated home fighter Eetu Laamanen (FIN) in the final. Khurzev defeated Sam van ‘t Westende (NED) in the semi final who won the bronze as well as Mikhail Naniy (RUS). In the women’s category Russia was also strong, Mariya Persidskaya claimed the gold medal U48kg. Dutch Mandy Tjokroatmo won two matches but didn’t win the final. Finnish Tea Laakkonen won bronze among the 7 fighters as well as Barbara Jopek (POL). Antonina Tovtetskaya (RUS) defeated her compatriot Polina Molchanova in the final for women U52kg. Audree Francis-Methot (CAN) won bronze with Sam Clark (GBR) next on the same stage. The second gold for France was captured by Shirley Elliot in the women’s U57kg division. Elliot also won the European Cup in London this year. This time Stephanie Inglis was the silver medallist. For the Scottish it was her second loss in a European Cup this year, in Orenburg she finished with silver too. The Netherlands ruled the women’s U63kg division with three medals on stage. Antoinette Hennink proved she can still beat whoever she wants and Jennifer Wichers was satisfied despite her loss against Hennink. Wichers, the winner of the European Cup in London beat Marit de Gier in the semi final who picked up a bronze medal in a field of 12 fighters. Pari Surakatova (RUS) joined the Dutch on the stage. Follow the live coverage of the event again on Sunday and watch the photos.