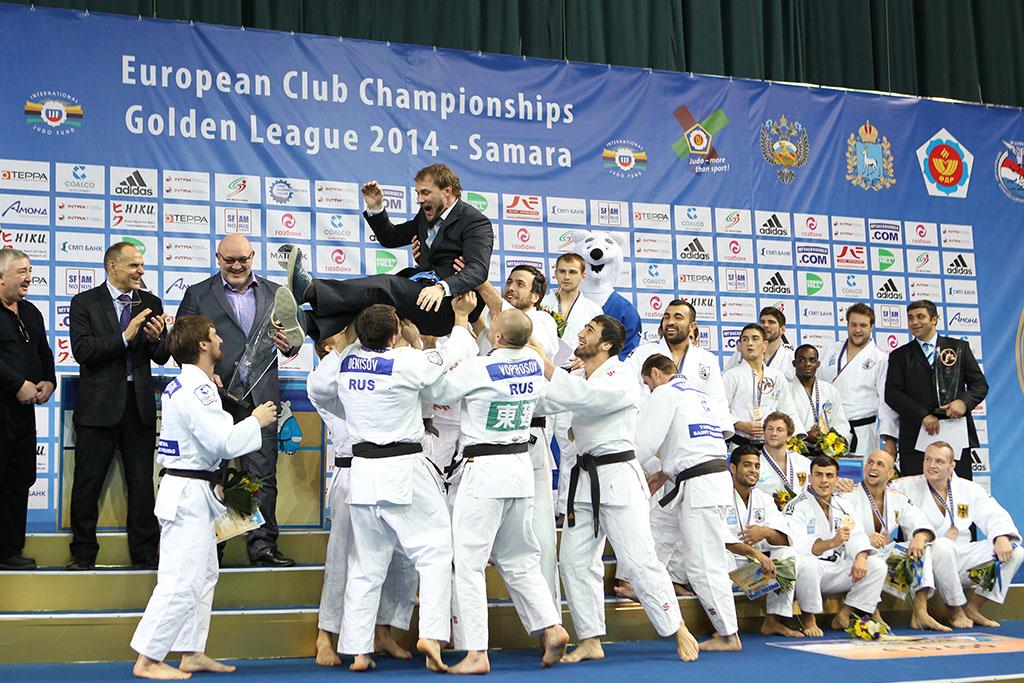 The first edition of the Golden League is history: with fitting historical moments. Whilst the Russian men’s team Yawara Neva cemented its reputation by winning its eighth title, the Turkish women’s team newcomers Galatasaray celebrated their first title ever. From the very beginning former world champion Yarden Gerbi was part of the team: “We feel like a big family. I am happy that we won and I am happy to win with that amazing team Galatasaray”, Gerbi said. After failing to take a medal four years ago, the Turkish team hd to settle for two the third place finishes. Today however, they took their place on the top of the podium. The Kosovan Mailinda Kelmendi, who won all her three fights said: “We expected to win a medal, but we didn’t expect to win gold”. Kayra Almira Ozdemir, better known as the former French Kathy Mathé, added: “I am very happy for that experience.” Before the competition it wasn’t clear whether she would even be able to compete as Turkish! Galatasaray Istanbul began by defeating RSC Campigny from France by 3:2. In the semi final they bet another French team: JC Pontault Combault convincingly by 5:0. In the final they won 3:2 against the Italian team Fiamme Gialle Roma.

For the men’s team Yawara Neva it wasn’t the first time at the top of the podium. All in all they’ve won the title eight times. So they go ahead of the German team TSV Abensberg with that success, the Germans having to settle for bronze here in Samara.

Yawara Neva started with a 4:1 win over Sainte Genevieve Sport from France after which they defeated another French team in a similar clear way with 4:2: Levallois SC Judo. In an all-Russian final they showed their quality by winning all five contests against Dinamo RNO Alania. “Of course to win a trophy like this at home, is a great thing and a great honour. For the head coach Vitaly Makarov this victory was special. “It’s hard to find the words to express it, it’s a great feeling. This year was a busy year for the fighters.“ After the European championships there were the world championships at home in Chelyabinsk. “Some fighters were tired, some had injuries. It was the team spirit which motivated them to become the first club who won eight times as a club.“

For Murat Khabachirov team events are always special: “Well, individually you are only responsible for yourself, and in the team you feel this responsibility and you do all you can for the team.Alim Gadanov said: “Of course to win a trophy like this at home, is a great thing and a great honor.

The president of the European Judo Union, Sergey Soloveychik said: „We had the strongest teams here on the tatami in Samara.” He added: “I would like to thank the organisers, the Russian Judo Federation and the Samara Judo Federation for the high level of presentation of the Golden League.”

Watch all the photos from Samara in our photo gallery: http://www.eju.net/media/?mode=showEvent&id=1885