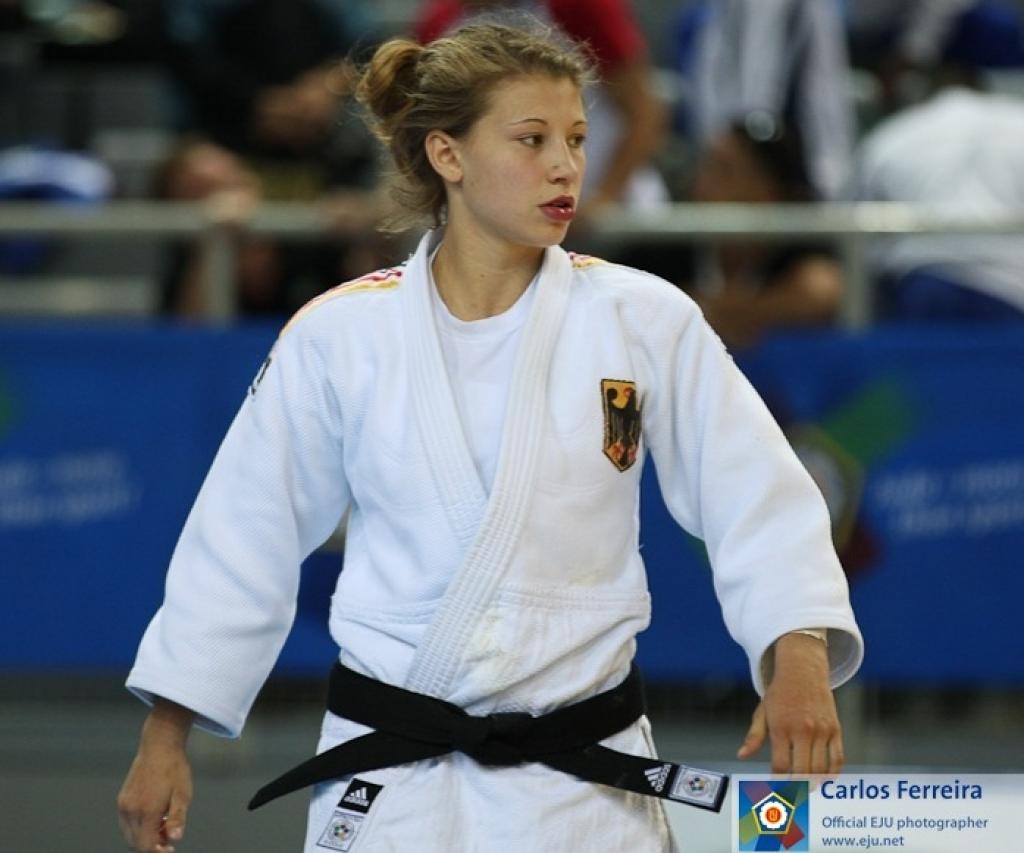 On Friday at the first day of the European Championships for Juniors Sappho Coban won the European title. The 18-year old German was interviewed by our commentator Sheldon Rooks in the commentator position, also new for rookie Sappho who is trying to gain a spot in the German senior women’s selection. How did she respond to Friday’s golden result?

“I woke up this morning and went to prepare my bag for coming to the stadium, and I saw the medal in there and realised ‘hey’ I am European Champion.” Sappho can wake up for the next 364 days to enjoy that.

Sappho Coban dominated this season in the U52kg category at the European Cups. Coban developed great. In Friday’s final final she confirmed that she is the number one of Europe at this moment. After two minutes she scored a waza-ari against Amelie Guihur of France) who was able to beat Alexandra Florian, another outperformer of this season. Thirty seconds later she again struck with a devastating point and scored the ippon to win the gold.

The tournament she had five fights, three ippons, two waza-ari and five yuko, so she was really busy throwing people. In only one of her five fights went the whole distance, the four minutes. So her dominance was clear.

In the senior Championships of 2011 in January she picked up a bronze medal at the age of 16. Her birthday is at 7 September and became 18 recently. She is now among the best women of Germany’s where there’s quite some competition with the current leaders Romy Tarangul and Mareen Kraeh.
Internationally she looks up to Misato Nakamura who’s one of her big heroes and also Yanet Bermoy from Cuba she likes. She fought the Grand Prix in Düsseldorf last year and lost to Soraya Haddad of Algeria.
Sappho Coban should be pronounced as Choban as her father is Turkish. She would have been happy with a medal this event but gold was the ultimate prize. Her family witnessed the matches on the stands, including her 14-year old sister who is also doing judo.

Coban: “My family are my biggest supporters. My mother used to do Aikido at the local judo club and they a Kindergarten section, so she took me along when I was 4 years old, but it was more like Glorified child minding”she said with a smile. “But I liked it immediately by the time I was eight I was completely hooked.”

“I had already beaten one French girl in the semi final (Rosso), who to be honest is probably the stronger of the two, but just had a great day. I threw her for ippon and in the final I threw the other French for waza-ari twice. The first time the referee gave ippon but to be honest when it was downgraded to waza-ari I was not disappointed, that was the right decision. I just felt I could throw her again and went for the uchimata and she went over again.”