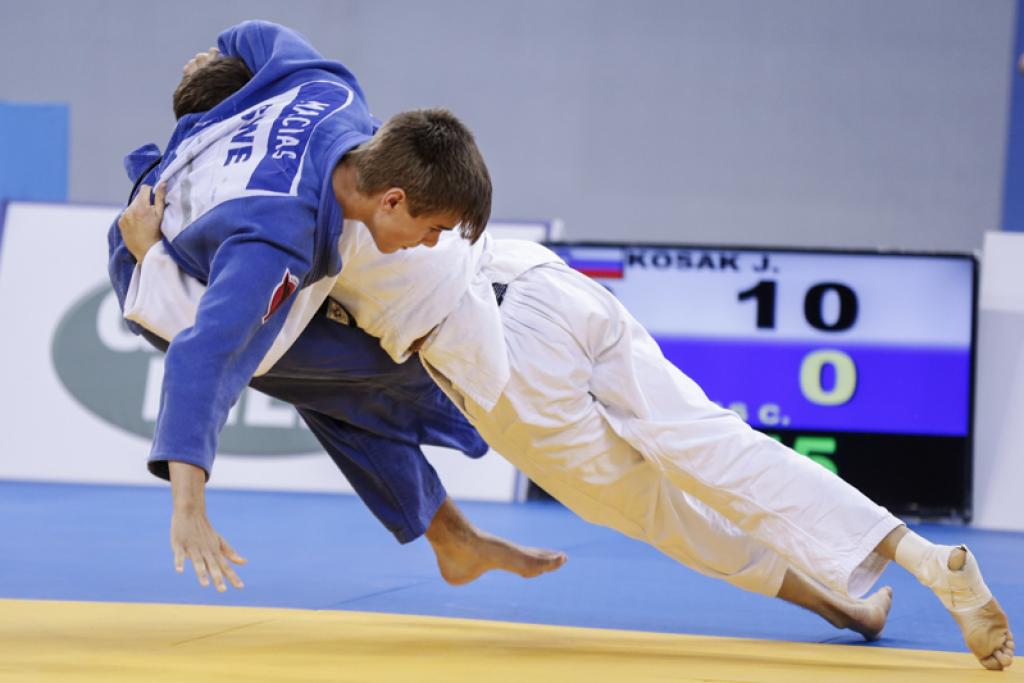 The European Cadet Judo Championships 2014 continued in Athens, Greece, with the men’s -66kg, and -73kg as well as the women’s -52kg, -57kg and -63kg. While most favorites shone and will be in the final, some other top seeds faltered.

Heydarov (AZE) solid on his way to -66kg final
Top favorite and -60kg European Cadet Champion Hidayat Heydarov (AZE) cruised into the final, eliminating all four opponents by Ippon ahead of time. In the semifinal, the top seed met Naim Matt (SUI) but defeated him after one minute.
Now the Azeri is up against Ismail Chasygov (RUS) in the final. The Russian, ranked fifth in the world, advanced over Ivan Bishkarov (BUL), Eric Ham (GBR) and Milan Buncic (SRB) to the final.

With 40 players, the -66kg had the most competitors in any of the categories.

Kolsenik (RUS) and Gramkow (GER) dominate in -73kg
Top seed Alexander Kolesnik (RUS) confidently advanced to the final with three victories by Ippon. He needed only 2.10 minutes to throw his opponent in the semis, Martin Hojak (SLO). Only Guillaume Riboulet (FRA) offered more resistance in the quarterfinal and Kolesnik needed the full for minutes to win by yuko.

From the other side of the pool, Tim Gramkow (GER) as well looked strong, winning all four matches by Ippon. In the semifinal the German needed only 18 seconds to dispatch Nicolas Chilard (FRA) to the bronze medal match.

Chilard is up against Leonardo Casaglia (ITA) for the bronze and Hojak will compete against Nikita Duinovs (LAT) for the other bronze medal.

Second seeded Samir Aghayev (AZE) on the other hand lost his first match against Christopher Wagner (AUT). Neither of them made it through repechage.

34 athletes competed in this category.

Leski (SLO), Temelkova (BUL) qualify for -52kg final
There were a few surprises in the -52kg. Unseeded Gwenaelle Patin (FRA) upset top seed Kristina Shilova (RUS) in the second round of the -52kg and then advanced to the semifinal by defeating Pauline Starke (GER).

However, in the semifinal Andreja Leski (SLO) proved to be too strong. The Slovenian, a silver medalist in the -48kg at the European Cadet Championship in 2013, relegated Patin to the bronze medal match, winning by yuko.

From the other pool, Betina Temelkova (BUL), a bronze medalist at the World Cadet Championships 2013 in the -48kg, looked solid on her way to the final. She beat Julie Kemmink (NED) in the quarterfinal and Lydia Boudouaia (FRA) in the semifinal. Unheralded Boudouaia had sent second-seeded Barbara Ertl (GER) to the repechage in round two.

World Cadet bronze medalist Shilova went to the repechage as well but lost her second match to Starke. The German will compete for the bronze against Boudouaia. The other bronze medal will be decided between Nazakat Khalili (AZE) and Patin.

In the final, Gercken will face Anna Dabrowska (POL). Dabrowska overcame second-seeded Mariia Gryzlova (RUS) in the semifinal and before had sent Emilia Kanerva (FIN) and Ulyana Minenkova (BLR) and Jesica Carl (GBR) to the repechage.

Gryzlova will fight for the bronze against Julia Kowalczyk (POL) and Jager fights Emilia Kanerva (FIN) in the other bronze medal contest. Fleur Den Dekker (NED), silver medalist at the 2013 European Cadet Championship 2013 in the -52kg, had lost against Kanerva in the repechage and before to Gryzlova in round two.

28 judoka competed in this category.

From the other side of the draw Michaele Polleres (AUT) advanced confidently as well by Ippon victories over Teodora Bzovic (BIH), Acelya Toprak (GBR), Anastasiya Kolyadenkova (RUS) and Anastasiia Borsyenko (UKR).

Second seed Renata Lorinc (HUN) overcame her defeat in her first match against Borysenko and will fight for the bronze against Piovesana. Borysenko has a shot at the bronze herself and will face Ivana Sunjevic (MNE).