SECOND TIME AROUND IS EVEN BETTER FOR EURANIE 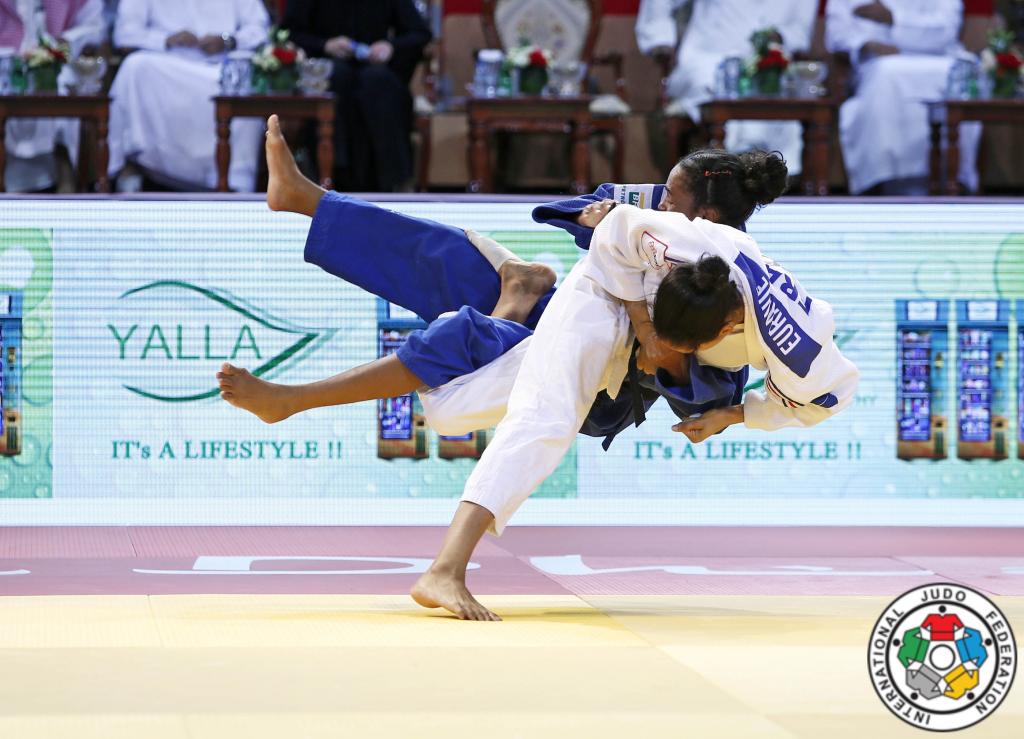 The term longevity is usually used to describe one’s lifespan. In which case it’s not at all out of place to point out that at 33 years of age Annabell EURANIE (FRA) may reasonably be considered to be in the twilight of her judo career. Yet, since her return to international competitive judo after a lay-off of an astonishing seven years, Euranie has confounded all expectations, including her own, by (in the past two years) climbing the IJF World Ranking List to sit comfortably now in 8th place. That was before her gold medal wining performance today in the -52kg category on the first day of competition at the Abu Dhabi Grand Slam.

After a first round bye Euranie began her day against Kim Mi-Ri (KOR) whom she defeated by a single yuko. In the quarter final Germany’s Mareen KRAEH was thrown after 28 seconds with left o uchi gari for ippon to put Euranie in the semi final against her team mate Priscilla GNETO. A single yuko scored by Euranie with o uchi gari was enough to put her into her second ever Grand Slam final. In the final Euranie’s opponent was number two seed Erika MIRANDA (BRA), but she too was thrown in quick time (26 seconds) this time with harai makikomi for ippon.

Euranie is open and honest about her decision to stop judo seven years ago. “I made a complete break with judo because I simply felt burned out and needed a rest. I wanted to have a normal life with a job and a family. I was at the club Levallois when I decided to stop doing judo. My coach at the time tried to persuade me to stop. I now have two boys aged three and four,” said Euranie. When asked about she copes when being away Euranie answered, “My mother looks after my boys when I am away, so I am relaxed about that. My husband (Bastien Puget) is with me as he is also my coach.” Regarding her aspirations at the time of her return to judo Euranie said, “When I came back to judo my aim was simply to get back into the national team and have a few internationals then retire after two years. But my results were far better than I expected to be honest and I got to thinking that I could be a real contender to compete in Rio in 2016.”