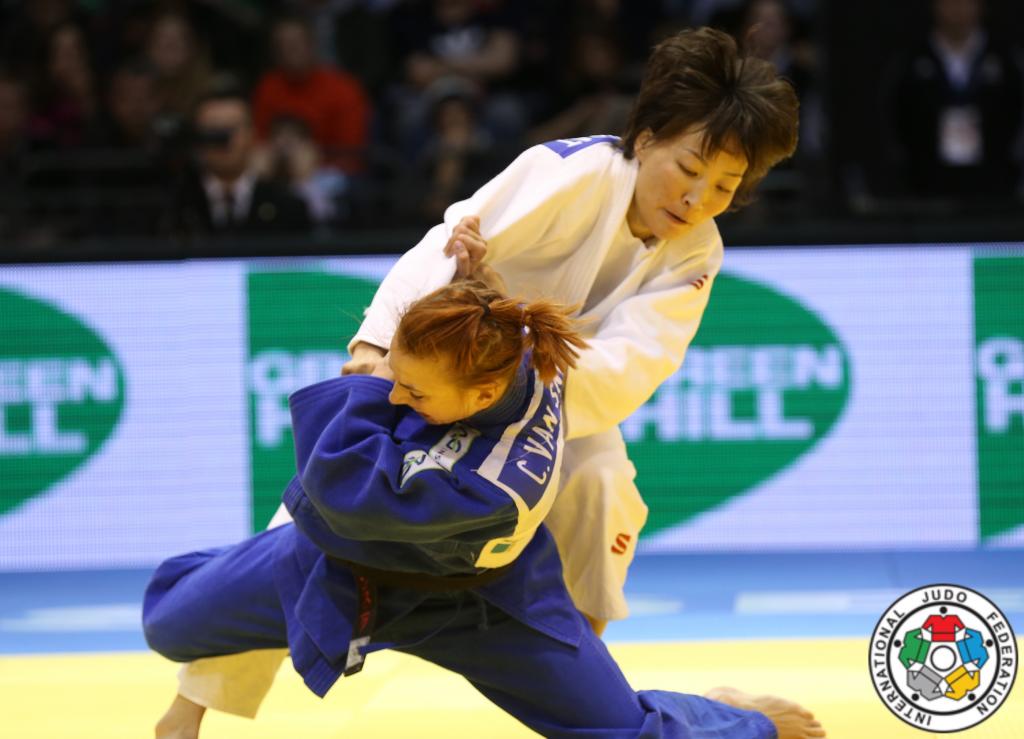 The opening day of the Duesseldorf Grand Prix got underway with half the world’s top ten taking part in the -48kg category. The lightest of women’s weights boasted a wealth of heavy hitters including current Olympic champion Sarah Menezes BRA, current world champion Kondo Ami JPN, and former world champions Munkhbat Urantsetseg MGL (2013) and Asami Haruna JPN (2010, 2011). It came as quite a surprise then that the gold medal escaped the clutches of this powerful quartet. Creeping up from a comparatively lowly 21st place on the IJF World Ranking List to take the top spot here was Belgium’s Charline van Snick who was not even one of the top eight seeds. Beginning with a narrow first round win against Kang Yujeong KOR van Snick then defeated Kondo, catching the young Japanese in yoko shio gatame for ippon. Kondo looked bemused as she made her way slowly from the tatami. It may have been the loss but I suspect it was the manner of the defeat, as Kondo is renowned for own newaza skills. Next up for van Snick was Italy’s Valentina Moscatt and the Belgian once again took things on the ground with a second win by osaewaza. The semi final was against Romania’s Monica Ungureanu whom van Snick threw for waza ari to take the contest. In the other half of the draw Munkhbat had worked her way through to the final with wins against Dilara Lokmanhekim TUR, Jeong Bo Kyeong KOR, and Asami. The final was settled on a single shido given up by Munkhbat leaving van Snick to enjoy her second Duesseldorf Grand Prix gold medal. Van Snick was beaming when she said “I was number two in the world awhile back and my aim was to get back into the top five. This Gold medal means – I am back! The first fight is always hard for me, because of the diet and making weight. But I was focused and simply stuck to my plan. The final match was a tactical fight. I heard what my coach said and I think I did what I had to really well. In the end my attacks were stronger than hers.”