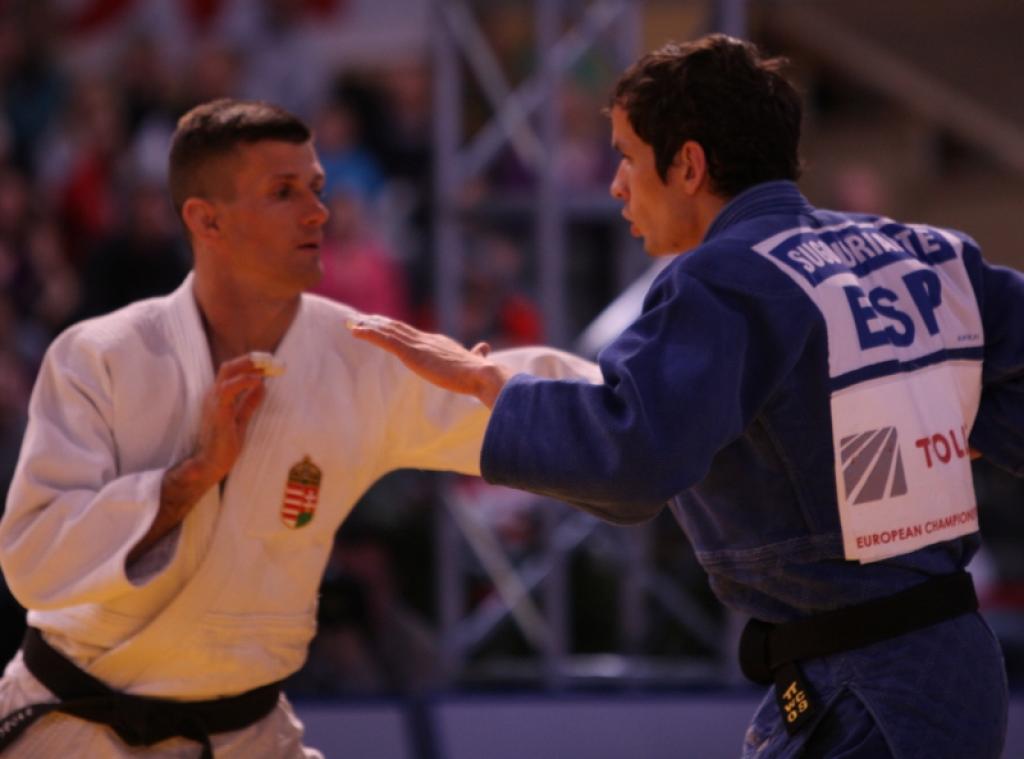 What a surprises today in the men’s U66kg and women’s U52kg. In one his first match Musa Mogushkov of Russia, one of the major favourites in the men division lost his first match dramatically against Tarlan Karimov of Azerbaijan.

Sugoi Uriarte (ESP) and Karimov reached the quarterfinal and Uriarte defeated the talent. He will meet with Miklos Ungvari in the semi final. The Hungarian defeated two very strong fighters in Rok Draksic (SLO) and Pawel Zagrodnik (POL). This year Ungvari defeated Uriarte at the European Championships. Before that win Uriarte won twice.

Colin Oates made the ExCel electric with his first wins, the second against former World Champion Khashbaatar Tsgaanbaatar (MGL). But Oates lost in the QF against Lasha Shavdatuashvili (GEO) who defeated David Larose (FRA) as well. Shavdatuashvili will now face favourite Masashi Ebinuma of Japan. So far he showed good judo.

In the women’s category some major upsets as well. Marie Muller of Luxembourg) defeated Spanish outsider Ana Carrascosa (ESP). Muller lost against Yanet Bermoy (CUB) in the quarter final. Bermoy will face an experienced European contender Ilse Heylen of Belgium who managed to beat European Champion Andreea Chitu in a dramatic fight where Chitu was about to take the victory on decision, but one second before the end Heylen scored waza-ari.
Heylen was victorious over surprise Christianne Legentil (MRI) who knocked out Majlinda Kelmendi (ALB), another outsider for a medal.
Double World Champion Misato Nakamura was expected in the semi final but she lost against An Kum-Ae (PRK). An also defeated Priscilla Gneto of France in this strong poule.

Rosalba Forciniti was the surprising winner of poule D where Romy Tarangul (GER) fought a characteristic match against Natalia Kuzyutina (RUS) and won on decision, but came short against the Italian on penalties. Forciniti also defeated Kim (KOR) and is the second European representative in the semi.