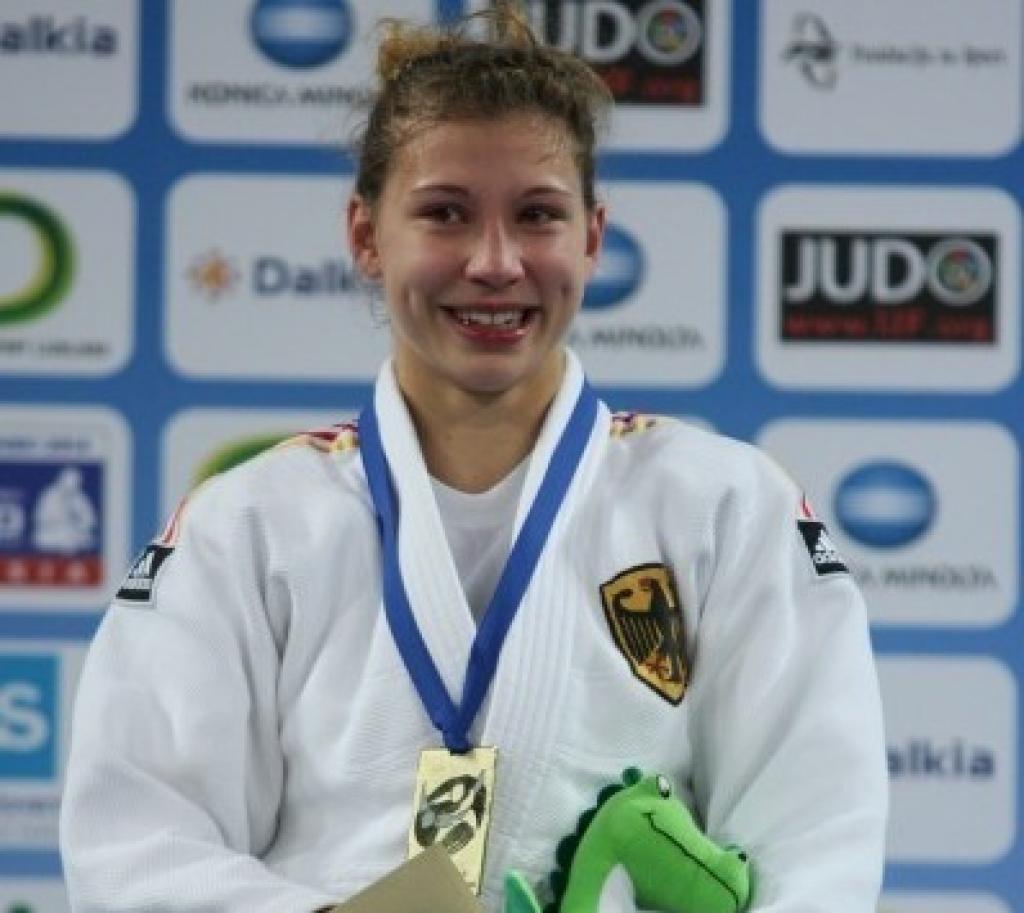 What a judo show today at the brand new Stozice sports hall with packed tribunes full of judo lovers.

The opening ceremony was a great warm up for even more judo fireworks. Everything was breathing judo today in Ljubljana where Europe shone again with three world titles, making 75% of the total. First female World Junior gold for Germany No one could stop Sappho Coban at day two in the category U52kg for young women. The German was the benchmark and left the rest with the silverwork, bronze or empty hands. She defeated her five opponent in an impressive way and not the least in European Champion Odette Giuffrida (ITA) and an impressive victory over Shira Hayat (ISR) in the semi. The final though was the toughest against Jessica Pereira of Brazil. She took the lead in the match but Coban came back with a yuko too in the last minute and tried to defeat Pereira with her outstanding groundwork. Due to the penalty it was Coban who took Germany’s first ever World Junior title. The bronze was after all for Alexandra Florian of Romania who captured the third medal for her nation. She defeated Julia Rosso (FRA) but lost to Karolina Pienkowska (POL) in the quarter final. In the repechage she fought back against Ai Shishime and Shira Hayat. Odette Giuffrida was able to beat Karolina Pienkowska for bronze, 18 seconds before the end she made the difference although she was dominant the whole fight. Sad for some strong European women who all deserved a medal but the competition in this category was unbelievable. The gold medal from the hands of Olympic Champion Urska Zolnir was an additional icing on the cake. Japan rules in men’s U66kg Japan made the right choice in their selection taking two hotshots two Ljubljana. Both showed a spectacular technique and Sho Tateyama and Yuki Hashiguchi climbed two spots compared to the 2011 edition in Cape Town where he won bronze and Sho Tateyama won the world title. Now it was different and Hashiguchi led from the start and only build out his lead with the ticking clock and didn’t gave the gold away. Adrian Gomboc won the bronze medal for the home country Slovenia in his match against Serbian talent Ilja Ciganovic who won bronze at the Junior Europeans but conceded two penalties against Gomboc. Jeremy Moreira of France crowned a great day with a bronze medal. He lost against Ciganovic but came back and overcame Houd Zourdani (ALG) for bronze. Poland proud at first female Junior World Champion Arleta Podolak is the amazing surprise of the day taking the world junior title for Poland. She is the successor of Rafal Kubacki in 1986, although incomparable. Today’s sensation from Poland built up her season well from a victory at a European Cup in Wroclaw, to bronze at the Europeans and gold at world level. Now the challenge is to build out her skills at senior level. Halima Mohamed-Seghir was the last Polish to climb to the podium taking silver in 2011. The 19-year old Podolak is an absolute sensation who won all her five fights despite severe opposition. In her first match Vivien Koteles (HUN) was put away with waza-ari, she beat Gabi Narvaez (ARG) and even European Champion Fabienne Kocher of Switzerland, making her the winer of her pool with Stangar, Centracchio and Andreea Florian who potentially all could become medallist. In the semi final Podolak overcame European runner-up Daria Mezhetskaya (RUS), so she beat the European top. Her opponent was Canadian Catherine Beauchemin-Pinard who won the silver. Earlier this year at the Cadet World Championships Canada opened with two world champions in Miami, but Podolak prevented a third world title and claimed the first ever female gold medal for her country in the juniors. Poland lost 6 world finals but the Warsaw sensation destroyed everyone today. Bronze was reserved for Fabienne Kocher in these killing fields of judoka. The swiss lost surprisingly in the quarter final against Podolak but defeated Mezhetskaia (RUS) in the repechage and Anriquelis Barrios for bronze in a tough bout. Christa Deguchi won bronze for Japan against Bekky Livesey who can be proud at an outstanding day and was close to Britains first medal. Antonio Esposito gives Italy first ever World junior title Really, who would have thought of Antonio Esposito as the new crowned World Champion U73kg? Antonio himself for sure as he showed an amazing fighting spirit today, Esposito was ready to take the world title, the first ever in his country Italy. In a nation with such judo history it is an absolute highlight of the year for Italy. With a field of Moustopoulos (GRE), Gugava (GEO), Saraiva (POR) and Sami Chouchi (BEL) who Esposito eliminated himself, he was the best of all European medallists and became the winner of his pool. Six fights he had to overcome, but especially the last two were the most precious. Ofcourse his sensational ippon after two minutes in the final against Sarvar Shomudurov (UZB), but as well the heroic semi final victory over Imranbek Gabasov of Russia. There’s hope for Italy where the seniors failed this year but the juniors hit the jackpot. La dolce vita is starting for Esposito…very short, because after this party, life will be hard to reach the senior top level. What a day and what a challenge for the 18-year old fighter from Napoli. The southern fighting spirit pays out again. A great takeover gave Roman Moustopoulos the bronze U73kg. He’s another Greek phenomenon who could only be stopped by Russian Gabasov today. The Greek European champion showed good judo in Ljubljana and defeated Margelidon (CAN) in the bronze bout. Gabasov himself was defeated by Gabriel Mendes of Brazil. Seventeen out of 32 medal for Europe and six brand new world champions are summarising the strength of Europe in all age categories. Must be noted that Europe has more than 50% of the participants field. The record of 1990 and 1994 is the challenge, 10 gold medals. Watch all photos in our photo gallery: