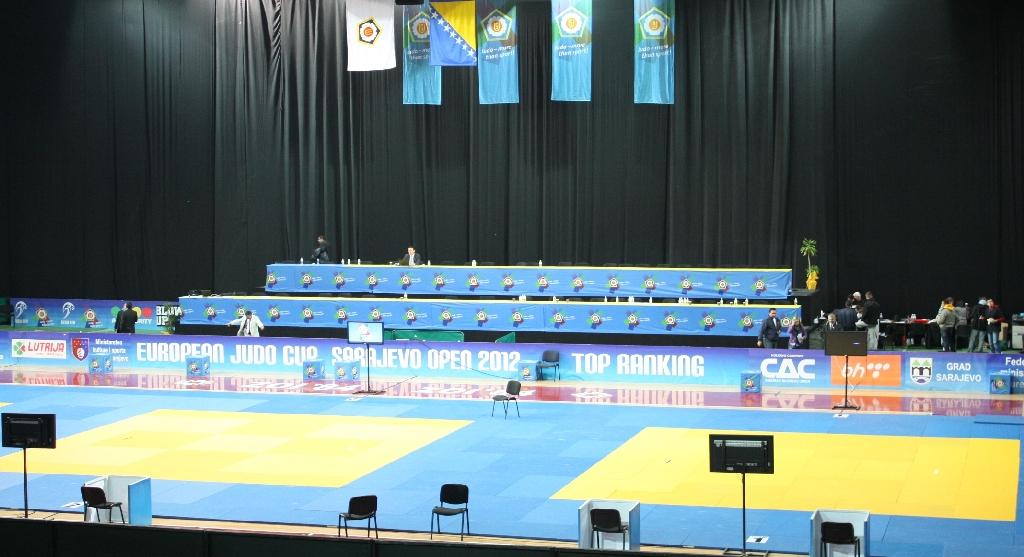 The Russian participants have won the European Cup in Sarajevo. It was the first European Cup for seniors this season. Bosnia and Herzegovina kicked off with good performances of the strong Russian team taking five gold medals. Great Britain won two titles as well as Croatia and Montenegro.

At the second day the lighter categories were held and seven different countries won the gold on Sunday in the beautifully decorated hall in Sarajevo. The final block was live on television.
Romanian Amado Lazea was the first to win a gold medal in the men’s division. Lazea defeated Russian Robert Mshvidobadze in the final U60kg.
Nikola Gusic won his second European Cup in his career. The judoka of Montenegro equaled Marko Radulovic who prolonged his last year’s title. Gusic won gold previously at the Belgrade European Cup. Serbian champion Ilja Ciganovic lost the final U66kg.

Belgium had already won bronze by Gert Maes U60kg but Jean-Yves Bottieau was able to increase his beautiful memories of Sarajevo. In 2010 he won silver at the European U23 Championships. On Sunday he won the final in the same hall, Olympic Hall “Juan Antonio Samaranch” – Zetra.
In the final the Belgian judoka defeated Stefan Bichisan of Romania.

The only Russian gold medal today was won by Kristina Rumyantseva. She defeated her compatriot Rada Abdrakhmanova. Great Britain won gold thanks to Louise Renicks. She defeated Serbian Smiljana Zivkovic in the final and defeated another Serbian in the semi final. The Briton is getting better at European Cup level and won the last edition in Malaga. For Olympic qualification she faces competition of Sophie Cox.

Croatian Andrea Bekic was convincing today. She defeated British Connie Ramsay in the final U57kg. Bekic also won the European Cup in Malaga and the 20-year old Croatian seems to develop as one of the new hopes for Croatia in the future. On Saturday sisters Matic won medals so Croatia has a good outlook in 2016, especially in the women’s category. The progression is clear, last year Bekic became 7th in Sarajevo, now she returned to Zagreb with gold.

Tina Trstenjak of Slovenia won the women’s U63kg category against Kathrin Unterwurzacher of Austria. She booked her first victory in a European Cup. She defeated Croatian likely Olympic participant Marijana Miskovic. Trstenjak had already won five World Cup medals and is one of the many female talents of Slovenia in this category.

Watch the podium photos and review the results here: