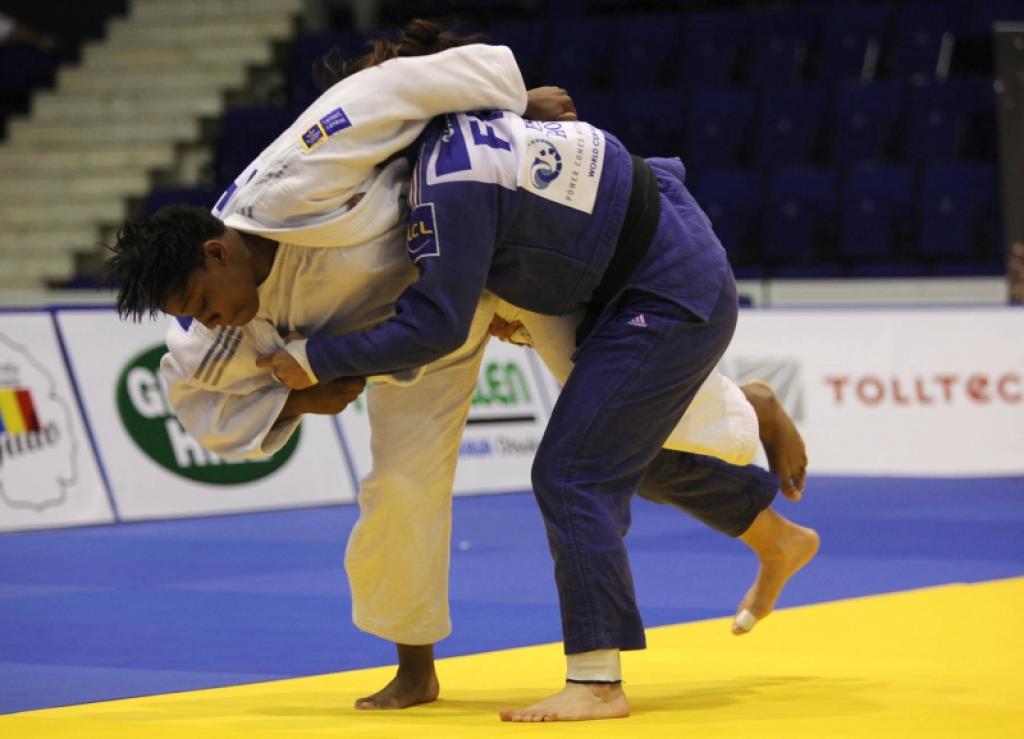 At the second day of the World Cup in Tallinn, Estonia another three different countries took the title. In total all seven categories have different countries as winner and fourteen medal winning countries. It was France who won eight medals in total but remarkably didn’t take any of their three finals.

Today French Clarisse Habricot (pictured) couldn’t beat Kim Polling of The Netherlands who won her first World Cup medal ever, and the first was coloured gold. 19-Year old Polling was able to beat her five opponents. This year in Warsaw she also fought five matches, but finished fifth after all. But today the Dutch rookie defeated experienced medalists like Jennifer Pitzanti (ITA), Marie Pasquet (FRA) and Katarzyna Klys (POL) to finish of Clarisse Habricot who lost her second World Cup final in one week. Last week in Bucharest she was part of the French quartet who won all medals. Pasquet won the bronze in Bucharest, just like today. Klys won the bronze as well.
Polling was European Junior finallist last year in Yerevan when she lost to Abigel Yoo, the current senior European Champion U78kg.
Polling won the fourth World Cup for Holland this season, all of them women, and three of them in this category U70kg. Edith Bosch (Budapest) and Linda Bolder (Cairo) both won good as well.

Despite the bronze of Klys, Poland did win gold. It was Daria Pogorzelec who took the title U78kg in Tallinn defeating Jie Zhang of China in a field of 11 participants.
Pogorzelec took Poland’s first gold this year and her second medal after winning bronze in Tunis. Urszula Sadkowska won four bronze medals and added her fifth today in Estonia.

In the category over 78kg she lost the semi final to Liu Huanyuan (CHN) who also won the final to Tea Donguzashvili (RUS). Sad for the Russian who takes the silver again, just like her seventh silver European medal in Vienna in April.
The 27-year old Liu won her third World Cup. She previously won gold in Hamburg in 2009 and she won the Tournoi de Paris in 2004, but faces the competition of Tong Wen in her own country to be selected for the Worlds or Olympics. Maybe she will have more chances for the World Championships squad this year as Tong Wen is suspended until September 2011.

The Chinese won three medals in total in all colours and won the medal ranking followed by six other countries with a gold medal too.